The Blogs
Raymond M. Berger
Real Bullet Points
Apply for a Blog
Please note that the posts on The Blogs are contributed by third parties. The opinions, facts and any media content in them are presented solely by the authors, and neither The Times of Israel nor its partners assume any responsibility for them. Please contact us in case of abuse. In case of abuse,
Report this post.

Defenseless against enemies that rise up against us

in every generation, we learned a bitter lesson.

In his autobiographical novel, A Tale of Love and Darkness, famed Israeli writer Amos Oz recalled his father’s accounts of growing up in the anti-Semitic milieu of pre-World War II Europe.

Oz’s father remembered the walls of his town covered with graffiti: “Jews, go to Palestine.” But when he arrived in British Mandatory Palestine, he found walls adorned with graffiti saying, “Jews, get out of Palestine.”

This experience encapsulates the story of the Jewish people since the defeat of the Jewish homeland by the Romans in the first century.

Where do we Jews belong?

Where can we rightfully live?

I share a legacy with Oz. As a child, my mother told me of the daily taunts and threats directed at Jews by the Polish boys in her hometown in Poland. The Jews of my mother’s town continually dodged cries of “Dirty Jew,” and “Go back to Palestine.” For Jewish youth, the daily walk home from school also meant dodging stones that the Polish boys hurled along with the insults.

My parents grew up in Poland between the World Wars. It was one of the most anti-Semitic periods in Eastern European history.

The “Jewish Question” was a topic of daily discussion in Polish society, government and the press. The Jews, increasingly unwelcome in their country of birth, wanted to leave for more hospitable shores. Many Poles also wanted them to leave. Some gentile political groups in Poland collaborated with Jewish Zionist groups to facilitate a plan for the departure of the Jews.

Not many years later, the Germans solved the “Jewish Question.” Their answer was that the Jews could not live anywhere. The world looked on.

Where Do We Belong?

In the late nineteenth century, Jewish visionary Theodor Herzl began a movement for the restoration of the Jewish people to our ancestral homeland in the Land of Israel.

Herzl was inspired by the anti-Semitic witch hunt against French army officer, Alfred Dreyfus. Motivated by anti-Semitic sentiment, the French military falsely convicted Dreyfus of spying for the Germans. From this event Herzl concluded that Jews would never be free in Europe. The only way for Jews to be free was to have a state of their own. Although Herzl never lived to see the fulfillment of his dream of a Jewish state, the movement he started resulted in the birth of the state of Israel in 1948.

Every Jewish New Year for almost 2,000 years, Jews in every corner of the world recited the hopeful and mournful prayer, “Next year in Jerusalem.” That year finally arrived.

But the “Jewish Question” never died. Instead it was reborn. The new claim is that Israel is an illegitimate state. Once again, the question emerges, “Where do Jews belong?”

Proposals for a Jewish National Home

Over the years, potentates, reformers, advocates, politicians and anti-Semites have proposed a number of locations for a “Jewish national home,” with the idea of getting rid of the Jews.

A great many plans were hatched in pre-modern times. In the seventh century, Mohammed defeated Jewish tribes in Arabia. Today’s Israel haters, who delegitimize the Jewish claim to the Land of Israel, don’t like to acknowledge that when Mohammed exiled the Jews, he sent them back to where they came from: Palestine.

In modern times, additional locations and plans for a Jewish National Home have included:

So, according to Israel-haters, where do the Jews belong?

Some say that Jews are a religious group, and thus are not deserving of a state of their own. But they don’t have an answer for the lack of security of Jewish communities across the globe.

Many Israel-haters argue, erroneously, that the Jews have no history in the Middle East, and only came to Palestine from Europe “because they needed a place to go after the Holocaust.” But over half of Israel’s current Jewish population has no ancestry in Europe. They are Jews who were expelled or forced to flee Arab countries in the Middle East, as well as their descendants. Jews displaced from Arab countries fled deadly pogroms and crushing anti-Semitic policies.

And what about Europe? Israel haters ignore the centuries-long record of European anti-Semitic violence—-from the English massacres of the twelfth century, to the Muslim assault against Jewish targets in the past and in the present day.

Israel-haters don’t acknowledge that across Europe today, every Jewish institution requires armed guards, and that Jews in formerly secure places like France and Great Britain are now fleeing those countries for their safety. The topic, “Do Jews have a future in Europe?” is today hotly debated in the Jewish community.

If anyone needs convincing that Europe is not a home for Jews, he might consider the case of Sarah Halimi. A retired physician and schoolteacher living in Paris, she was viciously beaten and murdered by a Muslim neighbor. That murder was the act of a single individual.

But how does one explain that a French court found the murderer not culpable on the grounds that he was high on marijuana when he murdered Halimi and thus was not responsible for his actions?

This judicial atrocity is only one instance of anti-Semitic French behavior across the years. For example, under German occupation during the Second Word War, Vichy French officials had few qualms about deporting thousands of Jews to their deaths in German extermination camps. Those deported to their death included thousands of Jewish children in hiding, hunted down and turned over to their killers by the French police.1,2

Today no one can credibly argue that Jews have a place in France—-or many other places in Europe.

In a fitful episode of insomnia, half-asleep, my mind’s eye skidded round and round the globe. Where is that ideal spot for Jews—-a place of safety and belonging, where a harsh world will no longer hunt us down? No longer persecute us?

Then my mind’s eye settled on a vast white expanse: the Antarctic. Save for a few scientists ensconced in their outposts, here there is no one to menace us Jews.

Surely, Jewish philanthropists can help to fund the resettlement enterprise. And just as the Jews turned the nineteenth-century Palestine wasteland into the fertile garden of the twentieth century, we could transform the Antarctic. We could grow food in hothouses. We could build cities in the snow. We could light our way through the Arctic winter darkness.

Then I woke up.

In the light of day here is what I think.

After we lost our sovereignty in the first century of the first millennium, we Jews remained without a country. Defenseless against enemies that rise up against us in every generation, we learned a bitter lesson: No matter where we settle, Jew-haters will tell us we don’t belong. Although they may not say it out loud, we know what they mean: We don’t belong anywhere.

Now, for the first time in two millennia we are restored to sovereignty in our ancestral homeland, the Land of Israel. We will no longer tolerate the voices that say “You don’t belong here.”

We are here to stay in the land of our forefathers.

About the Author
The author is a life-long Zionist and advocate for Israel. He believes that a strong Jewish state is invaluable, not only to Jews, but to the world-wide cause of democracy and human rights. Dr. Berger earned a PhD in Social Welfare from the University of Wisconsin-Madison and has twenty-seven years of teaching experience. He has authored and co-authored three books as well as over 45 professional journal articles and book chapters. His parents were Holocaust survivors.
Related Topics
Related Posts
Comments 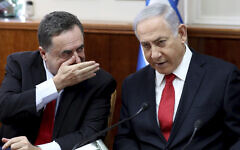