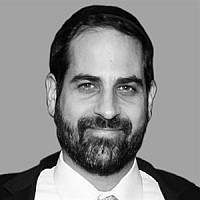 The Blogs
Adam Jacobs
Apply for a Blog
Advertisement
Please note that the posts on The Blogs are contributed by third parties. The opinions, facts and any media content in them are presented solely by the authors, and neither The Times of Israel nor its partners assume any responsibility for them. Please contact us in case of abuse. In case of abuse,
Report this post.

Einstein was said to have said that “a little knowledge is a dangerous thing.”  That was my principal thought as I read through Adam Kirsch’s piece “When Jews Were Like ISIS” in Tablet Magazine a few weeks ago.  Admirably, Kirsch has been participating the “Daf Yomi” cycle – the recurring global 7.5 year project to read through the entire Talmud.  Sadly, even this relatively advanced commitment to the attainment of Jewish knowledge will fall far short of the mark if the Talmud’s companion texts – the voluminous works of the many elucidators of the Talmudic text – are not read, processed and understood by the aspiring learner.

Mr. Kirsch is certainly free to speculate as to the “true” meanings of the texts that he explores.  What he is not free to do, is to posit his speculation as Toraitic.  Like Steven Covey teaches in the 7 Habits of Highly Effective People he should first seek to understand (what Judaism as we have it says about itself) and then to be understood (to introduce novelty).  The doctrine that causes him to conclude that Jewish law was at one time reminiscent of that of our beheading, marauding and stone throwing cousins who run the ISIS terror state is found in Deuteronomy 22:21 which says “They shall bring out the maiden to the door of her father’s house, and the men of her city shall stone her with stones so that she die; because she has done a wanton deed in Israel, to play the harlot in her father’s house.”  According to Kirsch, ISIS style, once it’s been discovered that the new bride is not a virgin she is (seemingly) immediately hauled out by a mob to be pelted with stones by her grieving father’s front door.  Wrong.

As the Talmud makes clear, the death penalty was rarely given.  According to one opinion, a court that handed down such a sentence once is 70 years was called a “bloody court.”  To be clear, it is exceedingly hard to get killed in the Torah’s justice system.  To be found guilty, you have to have been warned by two credible witnesses that what you are about to do is forbidden and who specify the penalty.  Later, the act itself must also be witnessed in the same fashion.  You’d almost have to be trying to actually get caught.  In the case of the bride in Deuteronomy 22 this means that after she becomes engaged she must be seen by two witnesses secluding herself with another man, receive a specific warning from those witnesses and then get caught by two others in the act of intimacy.

Kirsch correctly recognizes that the Talmudic sages seem reluctant to enforce these penalties, noting that “they define a na’arah (a maiden) very narrowly, so that the biblical restrictions and punishments applying to a ‘maiden’ are in force for only six months out of a woman’s life.”  This is a great thesis but where is the evidence to support that the meaning of “na’arah” was once different?  Can it be proved that the Sages simply reinterpreted what the Torah truly meant since “the iron-age morality of Deuteronomy was already, for the late-Roman rabbis, something of an embarrassment?”  Really?  Was there some enlightened attitude in Roman thought that shamed the Rabbis and their brutal “iron-age” text?  One would think that the folks who threw dwarves to the lions for fun wouldn’t have much to say to cause the Jews to become morally circumspect.   If their influence was so profound, why did Roman attitudes regarding pederasty (or many other aspects of sexuality) not have a similar effect?

What Mr. Kirsch fails to recognize is the possibility that these laws were always defined and enforced in the same manner.  True, we proscribe harsh penalties for certain transgressions but we simultaneously have always made it very difficult to actually be found guilty of those transgressions.  Why would the Torah do this?  The answer is that the text wants us to understand the gravity of the misdeed.  It’s saying “really, this act should be punished by death – that’s how serious it is.”  But just as in the doctrine of Lex Talionis (an eye for an eye) never, and indeed could not, have meant we actually poke out someone’s eye as a penalty, so too here was there never anything other than a theoretical chance of getting killed.  There are many laws to which this attitude applies and it’s what does (and has always) separated us from the likes of the Romans, the Taliban and the Islamic State.  To not understand this is simply to not understand Judaism and Judaism simply can’t be understood by a dermal gloss through the unsupported text.

In a time when many are acknowledging the growing failure of the institution of marriage and as someone who has attempted to help people with the crushing pain, heart-break and anguish that accompanies the act of adultery (even today) the Torah’s message is more timely than ever – infidelity is an act that kills people – emotionally and spiritually (and occasionally even physically).  The one who does it should understand its gravity and take the warning to heart.

About the Author
Rabbi Adam Jacobs is the Managing Director of the Aish Center in Manhattan. He was born and raised in New York and has lived in Boston and Jerusalem, where he received his rabbinic ordination. He completed his B.A. in music from Brandeis University and has a Masters of Jazz Performance from the New England Conservatory. He is a blogger for the Huffington Post’s religion section and has a penchant for writing and teaching about the uplifting, beautiful and unexpected aspects of the Jewish tradition. He was recently featured in the documentary film "Kabbalah Me" and has published a collection of essays called The Forgotten Light. Rabbi Jacobs now lives in “the burbs” with his wife Penina and their five children.
Related Topics
Related Posts
Comments