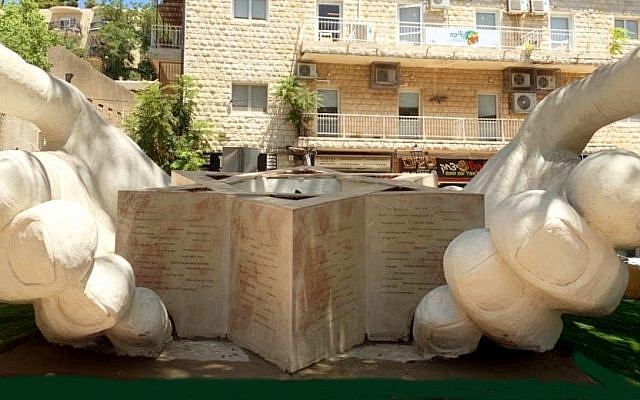 An interpretive memorial sculpture, like none that has ever existed in Jewish history or anywhere in the world, has been placed in Safed.  It is titled the “Hands of Choice.”

Conceived and funded by the Jewish American Society for Historic Preservation, in cooperation with the City of Safed and Ascent of Safed, the “Hands” is the artistic creation of noted Jerusalem sculptor Sam Philipe.

The design is simple, two hands cradling a Star of David.  On each faceted side of the Star are Jerusalem stone plates carved with ~ four hundred names in Hebrew and English of Jews who saved Jews.

The representative names are drawn from the 3,500 years of Jewish historical experience.  There are thousands upon thousands more, most of whom sleep in the dark, dark forgotten mist of Jewish memory.  They are not the names of those who risked their lives as honorably expected in the front lines of battle or in the fight for health and societal order.  They are the names of those who chose to do what they did not have to.

Contrary to popular thought, Jews are not required to risk their lives to save their fellow Jews. Yet, there were Jews, frequently at risk to their own lives, their family’s lives, their reputations, their fortunes, who took the step into the terrifying moral abyss of their times to save Jewish lives.

Even during the most seemingly impotent time of recent Jewish history, the Holocaust, when Jewish life was worth less than a dog’s whimper, Jews risked all to save Jews.

Yad Vashem, lightly and without depth, does recognize Jews saved Jews during the Holocaust.  They argue Jews are obligated to save Jews.

Halacha does not obligate Jews to risk their lives to save other Jews.

There is no permanent memorial or recognition program, similar to the incredible and very just, Righteous Among the Nations programs for Jews at Yad Vashem. There is no grove of trees, no walkway, no permanent mandate to recognize and honor the memory of Jews who saved Jews during the Holocaust at Yad Vashem.  It was never part of their original mandate.  It is not part of their mandate today.

Famed Holocaust historian Nechama Tec self-reflectively said, “Why had I overlooked the rescue of Jews by Jews? Did I think that self-preservation, as a basic drive, would take precedence over everything else? Historically, Jews have been viewed as victims, and not as rescuers, not as heroes. Had I unconsciously assimilated these perceptions? Had I assumed that victim and rescuer were incompatible roles?”

More than twenty years ago, a small group of survivors, who were saved by Jews, who were themselves within the Lion’s mouth of Nazi death, organized and approached Yad Vashem. They asked Yad Vashem to include Jews who saved Jews during the Holocaust in their Memorialization efforts.

Though tenaciously led by Haim Roet, himself a child survivor saved by Jews, the committees’ efforts were rebuffed.

Refusing to deny honored memory to Jews who saved Jews, they linked together with B’Nai Brith.  Annually, they have a commemorative ceremony at the Scroll of Fire in the Martyrs Forest outside of Jerusalem. They remember and honor newly discovered and carefully vetted Jews who saved Jews during the Holocaust.  It is an extraordinary ceremony of dignity and long overdue Kavod.

Today, the recognition of their heroism is frequently given in lieu to the children and more frequently to the grandchildren or even distant family as the heroes have passed into the night.

The Jewish American Society for Historic Preservation has also interacted with Yad Vashem’s, at times Byzantine, process to garner recognition for a candidate for the Righteous Among the Nations Program.  The candidate proffered by JASHP, recognized by the Anne Frank International Human Rights Memorial in Idaho, the GAIWO International Garden of the Righteous in Milan, and a number of smaller Holocaust sites, could not make headway with Yad Vashem.

The philosophic basis of Israel’s being is founded on the principle of Jews saving and helping their fellow Jews. Jews would no longer wait for others to save them.  Jews would act to save themselves.

There is no memorial to them. 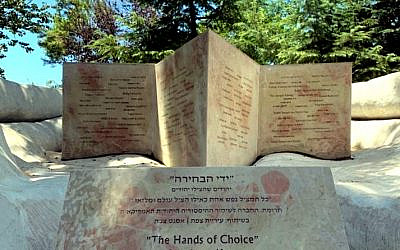 Photo from the rear of the Hands courtesy of Jerry Klinger

JASHP recognized the need, the City and Community of Safed, of mystical and human memory agreed, and the first-ever Memorial was created and placed.

The Hands of Choice Memorial is not a one-off effort.  It is not a memorial designed to be done and walked away from as a curious artifact.  The Hands of Choice is the initial proposed effort of annual commemoration and addition… if it can be organized.  There are far too many names and stories that are unknown, should be known, must be known.

The Hands of Choice Memorial is located on Jerusalem Street in Safed.  The open hands cupping the Star of David with the hundreds of forgotten names of Jews who saved Jews faces Mt. Meron.