‏My friend Shadi,* the Arab cop in Jerusalem, has a cousin named Jihad.

Jihad works in one of those cute powder pink and blue baby stores in the mall.

Shadi is married to Shlomit. Shlomit is Jewish, and they have a baby son.

Last week, they went to the baby store in the mall where Jihad works to buy a few things.

Jihad wasn’t there — it was Thursday, and on Thursdays, he works at the other branch.

Shadi spotted a display of fuzzy bear onesies as soon as they walked into the store.

The thing about Shadi is he loves bears. He’s low-key obsessed with them and imagines he was a bear in a past life. He wants to move to Alaska and raise bears.

(Shlomit doesn’t want to move to Alaska and raise bears.)

Shadi was thrilled with the onesie display and he scooped up two in every color. Including pink.

“But they’re so cute! Haram! They’re making my ovaries dance!”

“You don’t have ovaries.”

“Why don’t I have ovaries? Wait, what are ovaries?”

The line for the checkout at the baby store in the mall is always a Jerusalem microcosm, and Thursday was no different: A Haredi Jewish woman in a wig speaking English to her three young children. A man in a knitted yarmulke talking on his cellphone in Hebrew. Two women speaking Russian. And Shadi, a Christian Arab, and Shlomit, a (mostly) secular Jew, and their squishy little baby.

The guy at the counter’s name tag read “Amir” — a name which goes both ways.

When it was Shadi’s turn to pay, Amir greeted him in Arabic.

“Listen, habibi,” Shadi continued in Arabic. “Jihad is my cousin, so don’t double charge me, or I’ll tell Jihad.”

The Haredi woman behind Shadi suddenly got very quiet.

“Shhhh,” she told her kids.

“Don’t worry, I won’t overcharge you, habibi,” Amir laughed. “I don’t want to get in trouble with Jihad.”

The guy with the knitted yarmulke abruptly ended his phone call and was silent as a stone. His body, tense.

“Thanks, habibi. Hey, does Jihad get a discount? Can I use it?” Shadi quipped. “I’m kidding I’m kidding. I don’t want to annoy Jihad.”

Behind Shadi, the line was no longer a series of individuals shifting from one foot to another and impatiently waiting their turn. Instead, the line had transformed into a single superorganic entity, moving as one, recoiling from Shadi.

“Why are they being so weird all of a sudden?” Shadi asked Amir.

“Your cousin Jihad is a great guy, you know?” Amir said.

“Yeah, Jihad is really special,” Shadi said. “Jihad has always been such a good person — always helping, always looking out for the family, that’s Jihad. ”

“Do you speak English?” she whispered.
“Yeah, sure,” Shlomit answered.

“Should we call the police?”

“I think those two Arabs are planning a terror attack.”

“No, no,” she said. “They’re talking about a guy who works here named Jihad!”

“The guy buying all the bear onesies like a crazy person is my husband!”

“You’re married to an Arab?”

“Babe, tell these nice people here you aren’t a terrorist.”

“You’re a cop working for the Israelis?” Amir asked Shadi in Arabic. “Maybe I should have double-charged you after all.”

“I AM Israeli,” Shadi said in Arabic. He scooped up their bear onesies, and turned to face the line entity. “I am Israeli.” He said in Hebrew.

Shlomit, Shadi, and their baby son left the store.

“Shlomit, I can’t stand when people hear Arabic and they assume I’m a terrorist. It’s humiliating.”

Shlomit squeezed his arm. “I know. I’m sorry. But look, it’s Jerusalem, and its never simple. Tensions are high. There were two bombings the other day. A kid was murdered. People are scared. And come on, from their perspective all they heard was ‘Blah blah blah blah Jihad blah blah blah Jihad.’ Jihad Jihad Jihad. I mean, you can understand, right?”

Shadi rubbed his eyes. “Yeah, fine, okay… I get it. But it’s still exhausting living between these worlds.”

Shlomit squeezed his arm again and took him out for coffee. 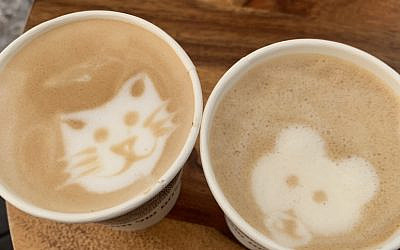 *Shadi and Shlomit are pseudonyms. But they are real people and a real couple, and with their permission, I write about them from time to time.

You can read more about them here:

About the Author
Sarah Tuttle-Singer, author of Jerusalem Drawn and Quartered and the New Media Editor at Times of Israel, She was raised in Venice Beach, California on Yiddish lullabies and Civil Rights anthems. She now lives in Jerusalem with her 3 kids where she climbs roofs, explores cisterns, opens secret doors and talks to strangers, and writes stories about people. Sarah also speaks before audiences left, right, and center through the Jewish Speakers Bureau, asking them to wrestle with important questions while celebrating their willingness to do so. She also loves whisky and tacos and chocolate chip cookies and old maps and foreign coins and discovering new ideas from different perspectives. Sarah is a work in progress.
Related Topics
Related Posts
Sarah Tuttle-Singer