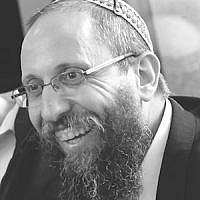 The Blogs
Yosef Zvi Rimon
Apply for a Blog
Advertisement
Please note that the posts on The Blogs are contributed by third parties. The opinions, facts and any media content in them are presented solely by the authors, and neither The Times of Israel nor its partners assume any responsibility for them. Please contact us in case of abuse. In case of abuse,
Report this post.

My entire world once revolved exclusively around teaching and education. That is until ten years ago, when the Disengagement from Gush Katif took place.

In literally one day, three decades of vibrant Jewish life were erased. The hundreds of homes, lush gardens, prosperous businesses and farming enterprises, exquisite synagogues, nurseries, schools, yeshivot and ulpanot, community centers — all that remained after but a few days, and that had taken years to build, became debris.

Generations of Jews who had, with their own hands, transformed a barren strip of land into a veritable paradise, were boarded on buses and transported to locations throughout the country.

Their immediate destinations were to be short-lived and temporary. Bus rides, which should have taken two hours, took up to 16 hours. Weary, bewildered and profoundly disheartened, they found themselves in unfamiliar locations. “Where are we?” many asked, and there was no one to tell them.

On the tenth of Av, 2005, the day of the expulsion, I received a request from several rabbis from Gush Katif. Would I check on the status of the Gush Katif families now being housed in Jerusalem hotels. Everything was to be readied, but the reality was that little had been done.

For help, I turned to my community — and other kehillot throughout Israel. As families began to arrive, volunteers came to the hotel to welcome them with kind words and sweet cakes. Each day, volunteers picked up dirty laundry to return it clean the next day. Tables laden with everything a family could need — Shabbat clothing, diapers, toys, sweets — were set up and dozens of service providers made themselves available, gratuitously.

Belying all this activity was a painful undercurrent. Productive lives had been violently overturned. There was idleness and despair. Eighty-five percent of the working adults had been employed in Gush Katif, and overnight became unemployed.

I turned to government officials to ask what could be done. Not only were there no answers to this query, but it became quickly apparent the issue had not even been considered.

Employment is more than a job. It strengthens one’s sense of worth, enables a family to feel contributory and productive again, and rehabilitates one who is slipping down a darkened abyss.

All of this, we have learned over the past ten years.

My first efforts at helping to find employment for the Gush Katif evacuees began a few days later. In one day, we found jobs for 17 individuals. Yes, they were temporary, but the light which had been extinguished from their eyes was rekindled.

I realized how true rang the words of our Sages, “A prisoner cannot deliver himself from a prison.”

Volunteers were recruited to help, but we realized we needed to establish a professional operation. That’s when JobKatif was officially launched.

Our goal is not to dispense charity. But rather to help the Gush Katif evacuees resume their lives of independence, support their families with pride and, once again, enjoy the precious sense of self-worth and dignity.

Over the years, we have developed services designed to meet the evolving and exigent needs of the Gush Katif families. We began with employment placement, but this was not enough. Many of the evacuees had been farmers, hard-working and successful. They would need to be retrained for other jobs — as only a small minority were able to return to farming. So, we subsidized 600 professional retraining courses, and today, fully 85% of those who attended the courses have found satisfying employment.

Many of the farmers and self employed business owners possessed an entrepreneurial spirit, so we worked closely with them to help them launch small businesses. We formulated business plans and budgets, and then coordinated closely with banks and private donors for business grants and loans. We launched more than 200 businesses and continue to work to realize business goals.

We developed new programs to smooth paths into the work force, offering employment subsidies and volunteer-work programs to encourage the hiring of Gush Katif evacuees.

Moreover, as the younger generation came of age, we granted 202 scholarships to students in Israel’s accredited academic institutions. Scholarship recipients receive employment counseling and are required to volunteer within their communities thereby creating a bedrock of enriched services.

To date, we have helped more than 2,650 gain satisfying employment. This has been possible thanks to Divine Providence and the generous help of thousands of good people from around the world. Yet, there still remain several hundred who need our help. That is our focus for the remainder of 2015.

After 2015, while we will continue to help the Gush Katif evacuees find employment, they will not be our exclusive focus.

What’s next? We have learned a good deal over the years, and we hope to apply our expertise to other population groups for whom stable employment is crucial for a better life.

We all possess the ability to do chessed in our lives. To create. To act. To give. Our mission has never been to just help these families ‘survive’ but to enable them to realize their dreams, as we would do with any family member.

May we be privileged to continue our work and enjoy the blessings of Divine Presence.

About the Author
Rav Yosef Zvi Rimon was born in Tel Aviv in 1968. He is a prolific writer of Halachic works, and is Founder and Chairman of the Halacha Education Center. Rav Rimon also founded JobKatif shortly after the disengagement to help Gush Katif evacuees re-integrate into the work place, and today continues to serve as its Chairman. He is also the recipient of the President's Prize for Volunteerism by President Shimon Peres. Rav Rimon was also awarded the Moskowitz Prize for Zionism on Yom Yerushalayim, 2014, in recognition for his work on behalf of the Jews of Gush Katif.
Related Topics
Related Posts
Comments