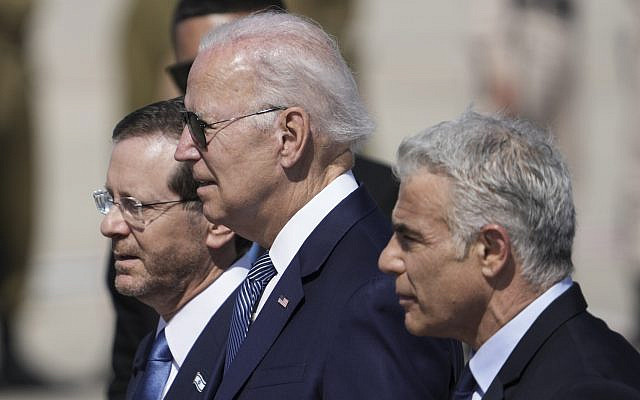 In a recent op-ed, The Times of Israel’s founding editor David Horovitz repeats the canard that so much of the press, including the American press, has repeated: that the Biden administration has tried and so far failed to “drag Iran” back into the JCPOA Iran Nuke deal.

This statement shows a fundamental misunderstanding of American politics. In 2020, Hillary Clinton lost the presidential election, in part, because she alienated a whole wing of the Democratic Party. Bernie Sanders, her primary opponent and leader of the progressive wing of the Democratic Party, was very slow to support her candidacy. Most of the J-Street Democrats supported her with little enthusiasm; many of them did not even show up to vote.

Joe Biden is a much more savvy politician than that. During the 2020 presidential election, at the first Democratic debate, all of the numerous Democratic candidates were asked if they would rejoin the JCPOA on their first day in office. All of the candidates dutifully raised their hands indicating that they would do so.

Once he was elected, Biden could have done so, had he wanted. That would have meant repealing all of the Trump sanctions, something he refused to do.

Biden was not about to make the same mistake that Hillary Clinton did. He has appeared to be attempting to re-enter the JCPOA, thereby satisfying all wings of the Democratic Party, but, in fact, has kept the Trump sanctions in place and blames the Iranians for his failure to re-enter the JCPOA. He does so knowing that he has been making demands to which Iran will never agree.

Biden’s approach to the Iran Nuke deal is perfectly consistent with his general view of Israel, which is radically different from Obama’s. Biden, a devout Christian, understands Israel at a level that none of his predecessors has. Moreover, he understands how Israel looks at the world – not just how the world looks at Israel.

Biden made that clear in the short speech he made when he arrived at Ben Gurion airport in Israel. There, he talked about his approach to a two-state solution, an issue critical to most Democrats, but his concept of a two-state solution is radically different from that of most members of the progressive wing of the Democratic Party, something they have not yet figured out.

“Greater peace, greater stability, greater connection, it’s critical, if I might add, for all people in the region,” he said. “Which is why we will discuss my continued support, even though I know it’s not in the near term, of a two-state solution. That remains in my view, the best way to ensure the future of equal measure of freedom, prosperity and democracy for Israelis and Palestinians alike.” Elsewhere he has said that a two-state solution will only come about when the states in the region accept Israel as a Jewish and democratic State.