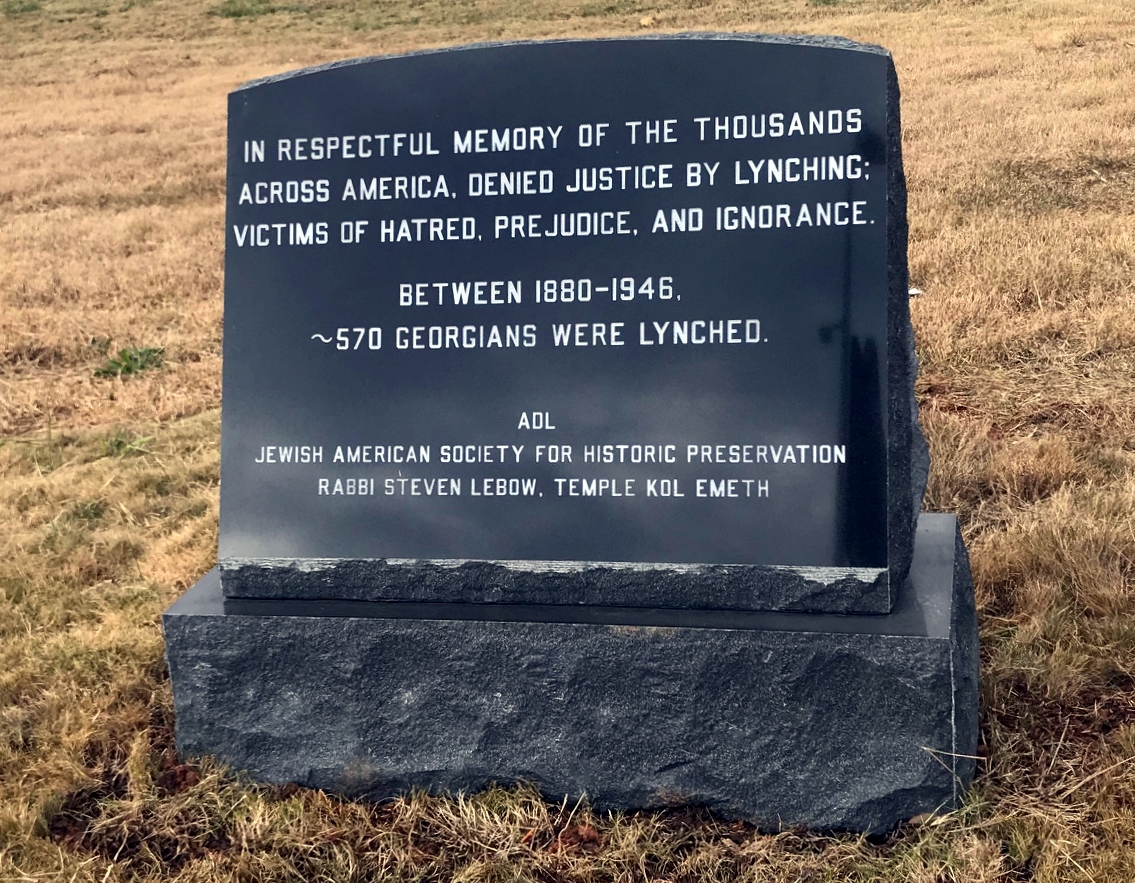 The only National Anti-Lynching Memorial in the country was made possible by John Lewis. All Americans mourn his recent passing.

August 17 is the anniversary of the lynching of Atlanta, Georgia Jewish businessman, husband, and President of B’nai Brith, Leo Frank. Frank was convicted of the rape and murder of 13-year-old Mary Phagan.

Convicted, by at best circumstantial evidence, fueled in an atmosphere inflamed by rabid antisemitism, Frank was sentenced to death.

Frank was kidnapped from prison and taken to Marietta, Ga. by a group named the Knights of Mary Phagan. Many of them were founding members of the Ku Klux Klan.

The morning of August 17, hundreds gathered to watch Frank swing. Before he died, Frank asked that his wedding ring be given to his widow. It was. Pictures were taken and sold like baseball cards.  Strips of his clothing were cut and marketed as souvenirs.

Leo’s lynching horrified the Jews of Georgia. The Klan’s dual goals were accomplished, lynching Leo, and terrorizing the Jews.

Interstate 75 development needed the land. The tree Leo swung upon was cut down. The land became an off-ramp for the new highway. The marker was removed.

Under Georgia law, the marker had to be re-sited when redevelopment was completed, near to the original historical location as possible. Aug. 2018, after four years in storage, the marker was rededicated on a small piece of land, the Georgia Department of named the Leo Frank Memorial.

The significance of Leo’s story is much more than an innocent Jew was hung.  Leo’s story went to the issue of lynching in America.

Lynching is misunderstood as hanging.  It is not.

The Bishop representing the Southern Christian Leadership Conference at the rededication of the Leo Frank marker and I spoke about what is lynching. I asked him, rhetorically, about the infamous 1946 Moore’s Ford Lynching in Georgia. Four young African Americans were shot to death. Their bodies were hung from a nearby bridge.

I asked, “if a person is shot to death, is it the same as lynching?”

The Bishop did not answer. The answer was self-evident.

As with Leo Frank, the Moore’s Ford victims of racism were “lynched” as acts of terror.

Lynching is societal terrorism for social, political and economic purposes.  Lynching could take many forms, not necessarily hanging.

According to Tuskegee University there are over 6000 documented “lynching” victims in the United States.  Approximately 2/3 of that number are Black Americans.  The rest are Brown, Yellow and White.

By definition, Native Americans, or Red lynching, were “lynched” in the millions.  Their numbers are not counted.

The single largest lynching in the country took place in New Orleans, 1891. Eleven Whites, Sicilians, were lynched on one day.

How many people have been “lynched” in the U.S. can never be 100% known.  The number(s) has become politicized.

Where was the memorial to the victims of lynching? There was none.

The Jewish American Society for Historic Preservation conceived and agreed to fund the first-ever national anti-lynching memorial in the U.S. We proposed it be sited adjacent to the newly rededicated Leo Frank Memorial in Marietta.  All lynching sites are horrible and should be remembered.  But the Leo Frank lynching site was a unique opportunity to speak about the national horror of domestic terrorism.

Enlisting the help of the ADL and Rabbi Steven Lebow of Marietta Congregation Kol Emeth, letters of support were obtained from key Georgians.  The Georgia Department of Transportation was applied to for siting permission, for a size appropriate to the Leo Frank site, National Anti-Lynching Memorial.  GDOT controlled the land.

The memorial looked like it would fail.  There was one more person I reached out to for help.  I contacted Congressman John Lewis for a letter of support and reconsideration to GDOT.

It took a few days.  Congressman Lewis’ staff got back to me.

With Congressman Lewis’ letter in hand, the legal staff of the ADL and I asked GDOT for reconsideration.  GDOT reviewed the request and reconsidered.

The National Anti-Lynching Memorial was approved for siting at the Leo Frank Memorial site.

The black granite stone, reinforced with internal steel pins, was placed.  The text of the anti-lynching memorial is simple and direct.

“In respectful memory of the thousands across America, denied justice by lynching, victims of hatred, prejudice and ignorance. 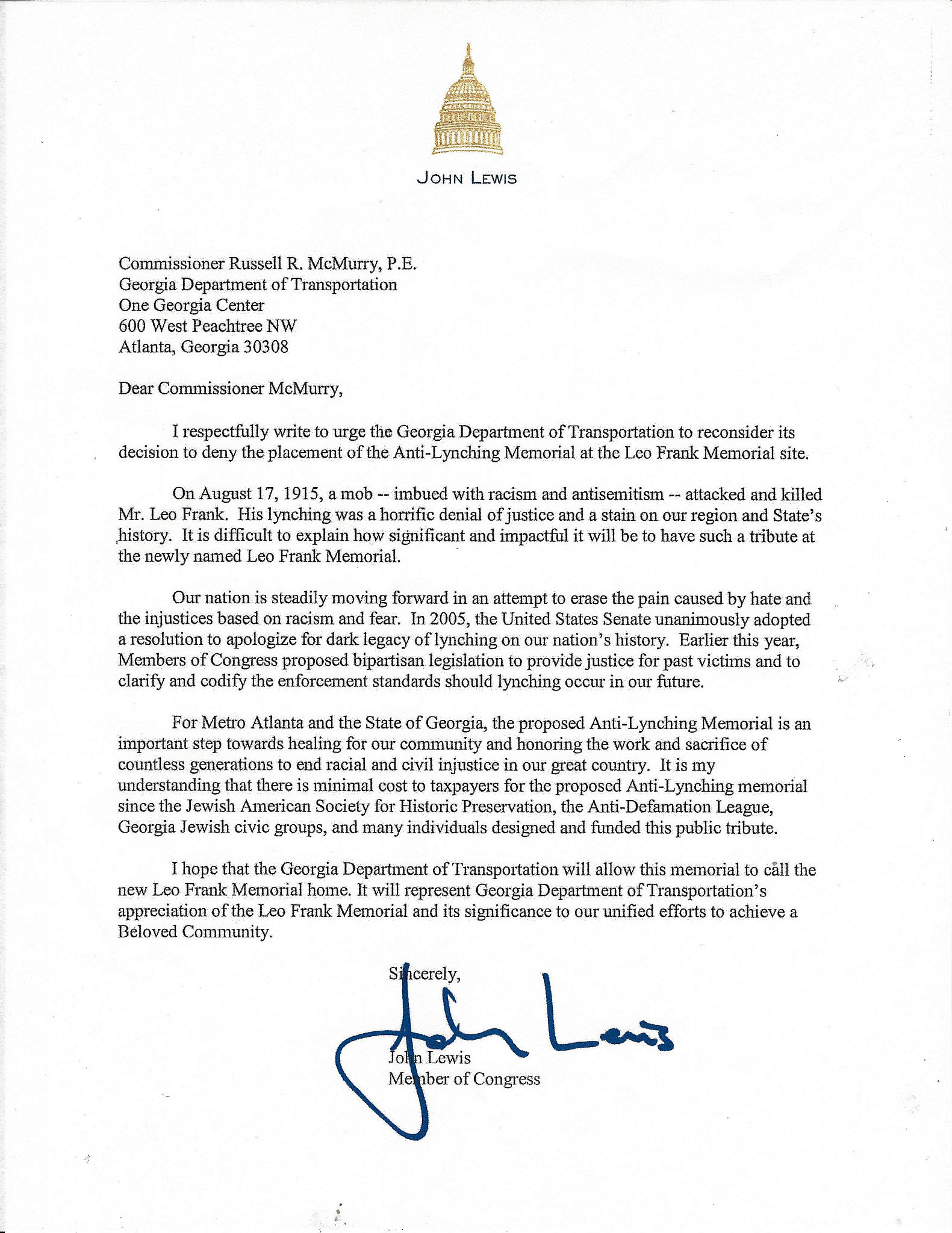 I respectfully write to urge the Georgia Department of Transportation to reconsider its decision to deny the placement of the Anti-Lynching Memorial at the Leo frank Memorial site.

On August 17, 1915, a mob – imbued with racism and antisemitism – attached and killed Mr. Frank.  His lynching was a horrific denial of justice and a stain on our region and State’s history.  It is difficult to explain how significant and impactful it will be to have such a tribute at the newly named Leo Frank Memorial.

Our nation is steadily moving forward in an attempt to erase the pain caused by hate and the injustices based on racism and fear.  In 2005, the United States Senate unanimously adopted a resolution to apologize for dark legacy of lynching on our nation’s history.  Earlier this year, Members of Congress proposed bipartisan legislation to provide justice for past victims and to clarify and codify the enforcement standards should lynching occur in our future.

For Metro Atlanta and the State of Georgia, the proposed Anti-Lynching Memorial is an important step towards healing for our community and honoring the work and sacrifice of countless generations to end racial and civil injustice in our great country.  It is my understanding that there is minimal cost to taxpayers for the proposed Anti-Lynching memorial since the Jewish American Society for Historic Preservation, the Anti-Defamation League, Georgia Jewish civic groups, and many individuals designed and funded this public tribute.

The evil of bigotry, hatred, and ignorance remains.  The efforts to bring about change continues.  Congressman John Lewis made a difference.

Jerry Klinger is the President of the Jewish American Society for Historic Preservation.