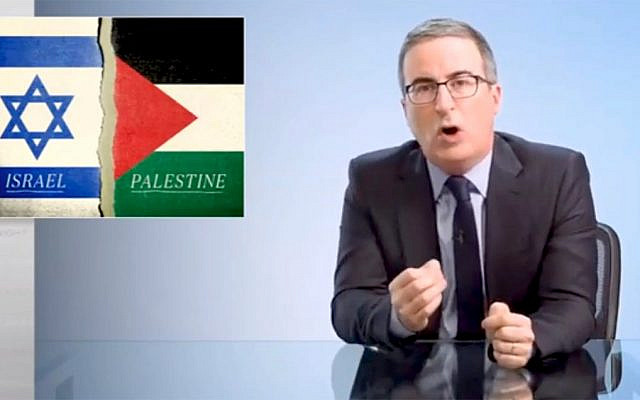 On Sunday night, HBO television broadcast late night comedian John Oliver delivering a brutal condemnation of Israel and supporters of the US-Israel relationship, accusing Israel of war crimes and calling for the United States to reconsider our longstanding support for the Jewish state.

For those who don’t know, John Oliver is the British humorist who won an Emmy as a writer for “The Daily Show with John Stewart.” For the past four years, Oliver has satirically covered news, politics and current events in his “Last Week Tonight” show. Sunday night’s broadcast included a segment attacking Israel and its supporters over the disproportionate number of deaths in Gaza as Israel’s Iron Dome has protected Israelis (Jews and Arabs) from thousands of missile attacks.

While Oliver repeatedly and conveniently said he wasn’t getting into history or the background of the conflict, his misguided censure goes far beyond the limits of castigating comedy. 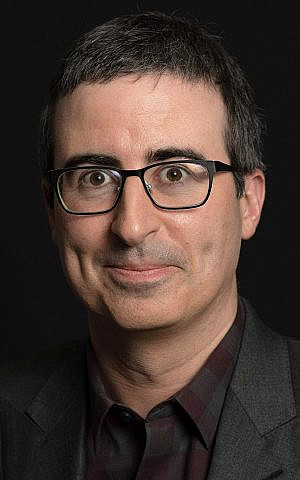 John Oliver delivered a misguided, belligerent screed castigating Israel and its supporters (Wikipedia image).
Oliver’s belligerent, deceptive screed could be ignored if not for his large audience of more than four million viewers who likely know little more about the Arab-Israeli conflict than his foolish portrayal offers.Oliver went to lengths to denigrate the Iron Dome missile defense system for giving Israelis an advantage over Gaza rockets. He quickly dismissed the words of an IDF Spokesman saying Gaza has even better protection, which is to not fire rockets at Israel and Israel will not fire on Gaza.He spread the vile fiction that Israel — the region’s truest parliamentary democracy and most noble example of a nation that strives to uphold the rule of law and protect the rights of minorities – is an apartheid nation committing war crimes against innocents, while offering that doesn’t mean all Jews are bad people.

Oliver did not consider how any other nation would react to similar circumstances.

He did not ask his audience to question what Washington’s reaction might be to terrorists firing missiles at our Capitol to protest issues before our Supreme Court.

He did not ask viewers to consider how the Canadians, British, French or any other people would respond to terrorists firing thousands of missiles at their homes, schools, and civilian neighborhoods.

He spoke of Israel’s attempts to control Gaza’s borders, but said nothing of the thousands of missiles terrorists have imported to Gaza despite Israeli and Egyptian efforts to prevent Gaza from becoming a staging ground for terror attacks against Israel that Hamas, Islamic Jihad, and their Iranian sponsors know will cause Palestinian casualties.

He said nothing of the Palestinians of Gaza who have been hijacked and will have no chance of a better future as long as the area is ruled by terrorists who care little for the people, promise or potential of Gazans.

Hamas terrorists have ruled Gaza since Israel voluntarily withdrew its military from the Gaza Strip and the majority of the West Bank 16 years ago with a commitment that the Palestinians would build the foundation for a future state that could live in peace with its neighbors.

Instead, Gaza’s two million residents are today subjugated by rulers who have suspended elections and civil liberties, ruled by decree, repressed political opposition, manipulated and brutalized through intimidation, imprisonment, and murder, exercise absolute control over local media, and operate without any semblance of the checks and balances the people of Gaza deserve.

Hamas, Islamic Jihad and their Iranian sponsors have brought extreme poverty to Gaza, often leaving hundreds of thousands of Gazans without food, shelter, employment, healthcare or other basic necessities to pursue the potential of their lives.

John Oliver didn’t give those facts even a mention.

Israel’s military will silence Gaza’s rockets and fulfill its obligation to decimate the terrorist infrastructure that threatens its security without John Oliver’s permission. No nation would accept thousands of missiles aimed and fired at its civilians.

But once a ceasefire takes hold, who will help free the people of Gaza?

Will John Oliver demand free and fair elections in which political opposition is allowed to stand for a better future for the people of Gaza and its neighbors?

Will Oliver say a word when instead of investing hundreds of millions and more of foreign contributions building a society of peaceful promise and potential, those monies are stolen in order to buy offensive weapons of war and invest in violence instead of education, housing, healthcare, jobs, infrastructure, and a thriving economy?

The people of Gaza can almost certainly count on John Oliver’s silence as they remain brutalized and oppressed, as children learn hatred in school and are encouraged towards violence rather than tolerance and peace, as residential neighborhoods and the families they house become human shields behind and beneath Hamas and their cowardly likes will hide.

If John Oliver cannot blame the Jews, will he speak even a single word on behalf of Palestinians whose greatest oppressors are the rulers he now defends, terrorists whose barbarism he flippantly excuses?