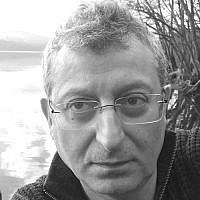 The Blogs
Gary Sinyor
Film and TV Writer/Director
Apply for a Blog
Advertisement
Please note that the posts on The Blogs are contributed by third parties. The opinions, facts and any media content in them are presented solely by the authors, and neither The Times of Israel nor its partners assume any responsibility for them. Please contact us in case of abuse. In case of abuse,
Report this post.

The current disaster of corona virus has no direct comparison in the Torah. There is no illness spoken of that afflicts the world population and has the potential to wipe out the sick. But there is a story which holds lessons for society and how we should react. I’ve often wondered why the patriarchs are Abraham Isaac and Jacob. A large portion of the book of Genesis is devoted to the story of Joseph who is clearly next in line. Joseph, popularly portrayed as the victim of fraternal jealousy, the dreamer who turns out to be the saviour of his family. But in the story of Joseph there is a potential warning as to how society and its leaders can react to economic disaster.

He stored so much, the years of plenty were so incredibly good, that the Torah says that the food was impossible to count.

Joseph’s plan to save people, not just the people of Egypt, but the people of neighbouring countries has worked. Superficially, he has carried out an incredible task by not letting excess go to waste and keeping it for the bad times to come.

Here’s my problem. Clearly coins existed at the time. How else could the Egyptians or indeed his own brothers who come to buy food for the family have paid for that food? The Torah is explicit that coins were used by Joseph’s brothers to buy food. So we are not dealing with a bartering system.

Joseph has stored the grain for the future in the times of great wealth and has indeed saved the population.

But what the Torah doesn’t say is that he paid for the original excess. On the contrary he merely gathered it up. If he had bought it, the Torah would have said. To be direct, he took advantage of a tragic situation to plan for the future. One could argue that of course he’s not paying for the excess grain because it would only rot and go to waste. Fair enough.

Things get so bad that the Egyptians, hungry and desperate, give to the government their cattle, their horses, all their money and finally “Joseph bought all the land of Egypt for Pharaoh for the Egyptians sold every man his field because the famines was sore on them and the land became Pharaoh’s”. This is no small footnote to be glossed over. He used the situation and his own influence to hand over the entire country to the Ruler.

So in the face of economic tragedy, of a downward turn of unprecedented proportion’s a man stepped in and saved many many people – used his intelligence and savviness – and then handed over all that power to the Government of the day.

We are living right now in a potential economic disaster of unprecedented proportions. Thankfully Governments are stepping in to save our economy and help their populations. But we should be wary of what is to come. If house prices drop, it would be all too easy for people in power, whether they be Governments or corporations or wealthy individuals to step in and take control, to buy houses cheap, or to invest in shares cheap, or to pay workers less than they did.

Joseph is no hero. He takes grain when the population is overloaded, without recompense, and charges those very same people for their own product. Yes he helped, he saved lives, but in any just society, the leaders would not seek to capitalise on a global misfortune. He should have paid for the excess grain in the first place or not charged for the grain he’d stored. Instead he took advantage based on a simplistic capitalist principle of supply and demand. We need a different answer. When you have excess supply, you will give away your unnecessary grain for next to nothing only to be charged for that very same excess created by you in times of dire need when demand outstrips supply.

We have already seen examples of individuals trying to buy stocks of hand sanitiser and then charging multiples of the price in an effort to make a quick buck. They were called out and rightly so. But we live in world where “trying it on” is often regarded as good business. We’ve learned to live with that, though I’m no fan of it. However, let’s not fool ourselves that their aren’t powers at work already plotting on how to capitalise on our dire straits. We need to be very very careful and our Governments should act with moral purpose untinged by thoughts of benefit.

Joseph’s plan gave power to Pharaoh. It gave him control over his people. The net result was that the Children of Israel were enslaved by the very power that Joseph had helped create. That is a salutary lesson and that is why I am more than happy that Joseph is not listed amongst the  Patriarchs.

About the Author
Gary Sinyor is a multi award-winning writer director and producer of Films and TV based in the UK.
Related Topics
Related Posts
Gary Sinyor
Comments