The Blogs
Sam Litvin
Apply for a Blog
Please note that the posts on The Blogs are contributed by third parties. The opinions, facts and any media content in them are presented solely by the authors, and neither The Times of Israel nor its partners assume any responsibility for them. Please contact us in case of abuse. In case of abuse,
Report this post.
On March 16th Jerusalem Post published an article by Donna Edmunds that I have been seeing a lot in Social Media. It quotes Nobel Prize winner in Chemistry Michael Levitt. Levitt claims that the virus is slowing down. He was correct, when he made that statement in February. However, by the time the article was published, it did not reflect the situation and today it is misleading and is used to further denial of people who do not know any better. 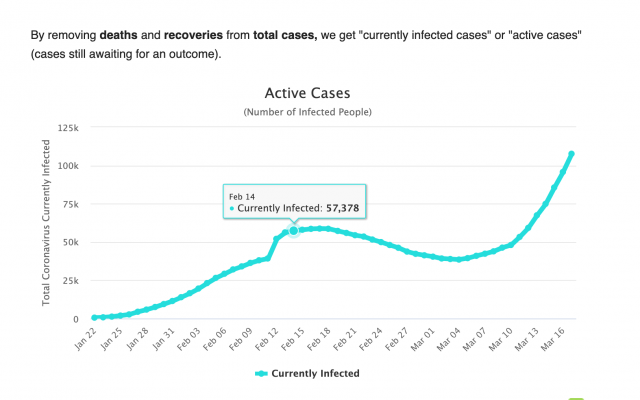 Here we see that indeed, cases were slowing down in February, but that trend has since reversed.
Chart created by worldmeters.info
Since February, the pre-emptive actions not taken by countries like Italy and United States, have come to impact the world through the spread of the virus. As of today, the virus is doubling every couple of weeks, in countries like US every couple of days. Due to shortage of tests, it is difficult to say the true spread of the virus in US or its real impact.
However, people in US are sharing the article thinking this are getting better. This is the effect of taking the words of someone who is an expert in one area and then using their words in an unrelated area. This article is a massive error of judgement on part of Jerusalem Post;  a journalist should only quote an expert in an area of their responsibility or expertise, which Edumnds admits in the article, that Levitt is not an expert in epidemiology or public health.
Reality of this virus, is that given its incubation period, we cannot predict it. We can only see its impact given how it was spread two weeks ago. To know what is happening today, we have to wait two weeks. The fact that Jerusalem Post published Levitt’s February analysis in mid-March is a sign of their staff’s failure to understand the facts of this virus and the impact of poor analysis. Keeping that article up, gives people false hope and contributes to the disinformation on this topic.
For the sake of public safety, Jerusalem Post needs to take that article down and issue an apology.
About the Author
Sam Livin was born in Soviet Union and grew up in San Diego. In 2012, he travelled the world photographing Jewish communities publishing a book called "Your Story Our Sipur." Today he continues to write about Israel and Judaism as he lives and studies business and ecology in Tel Aviv.
Related Topics
Related Posts
Comments