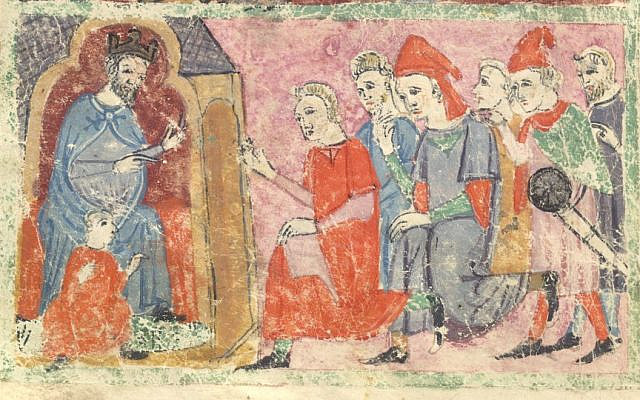 One of the most vivid illustrations of rabbinic imagination occurs in the scene when Judah pleads with the viceroy of Egypt for Benjamin’s freedom. Judah does not yet know that the viceroy is his brother Joseph, though Joseph knows full well who Judah is.

The story, as told in the Torah begins with Judah approaching Joseph who is seated, presumably, on a throne. Judah asks for permission to speak and launches into an impassioned plea for mercy. His plea is so powerful that Joseph cannot bear to hear it. Fearing that his emotions are about to get the better of him, and worrying that he might break down in front of his acolytes, he orders all his guards and officers to leave the room, before revealing himself to his brothers.

The Midrash does not interpret the story in this way. Instead it regards Judah as threatening Joseph and Joseph responding in kind. The rabbis of the midrash break down Judah’s speech to show that each clause contains an implied threat, to Joseph personally and to the kingdom. His brothers, who watch in astonishment as he confronts Joseph, say to each other ‘When kings dispute, it is better not to get involved’ (BR  93,2). They regard the scene they are witnessing as foreshadowing a confrontation between the royal houses of Egypt and Israel: Judah being the ancestor of David.

But the Midrash is not satisfied with merely interpreting Judah’s entreaties as threats. In a spectacularly futuristic passage they turn Judah and Joseph into super-heroes, more reminiscent of twentieth century Marvel comics than second century rabbinic literature. When Joseph pretends that his knowledge of Judah’s past behaviour is due to a supernatural insight, Judah roars so loudly that he can be heard four hundred miles away, in the Land of Canaan. His nephew Husham, son of Dan hears the roar and with one bound leaps from Canaan to Egypt. He stands alongside Judah, the two of them roar together until the teeth of the bystanders fall out. The hairs on Judah’s chest protrude like spikes. His brothers join in, stamping their feet until the earth turns into heaps. But Joseph is not cowed, he too stamps his foot and the stone pillar he is sitting on is dashed into pebbles. They carry on like this until Judah declares that he will go out into the streets and destroy the whole of Egypt. Finally his brothers restrain him, telling him that not even his powers will extend that far. This marks the moment when Joseph decides to reveal himself. (BR 93,7)

The authors of this Midrash may have had fun dreaming up this scene, but it wasn’t fun that impelled them to do it. There is a serious idea behind it. Written probably in the third century, in the Land of Israel, the authors were living at a time when it appeared the Roman occupation would last for ever. For nearly two centuries the Jews had been implacable opponents of Rome; known as one of the most troublesome provinces in the Roman Empire they had sustained campaign after campaign of guerrilla warfare and revolt, culminating in the Bar Kochba rebellion in 132 CE. Nor had their uprisings been confined to the Land of Israel, in 127 BCE the Jews of Cyprus, Cyrenaica and Egypt rose up against the Emperor Trajan.

But that was all in the past. The fiercely independent, rebellious Jews had been quelled. Troublesome no more, by the time our Midrash was written the Jews of Palestine were living in depressed, impoverished conditions. We don’t know how much influence the early rabbis had over the ordinary population but it seems clear they were engaged in an enterprise to become the accepted spiritual leaders of the nation, an enterprise in which they were phenomenally successful, as subsequent Jewish history has shown.

To achieve this they needed to do more than just preach religious messages. They had to restore national morale, to motivate the disillusioned nation and inspire them. They recast biblical stories in hyperbolic terms, using Midrash as a motivator. Things might look bad now, they told their audiences but just remember what you are made of. Your ancestors were courageous, confrontational fighters, superheroes. So too are you. Never forget your nation’s former glories.