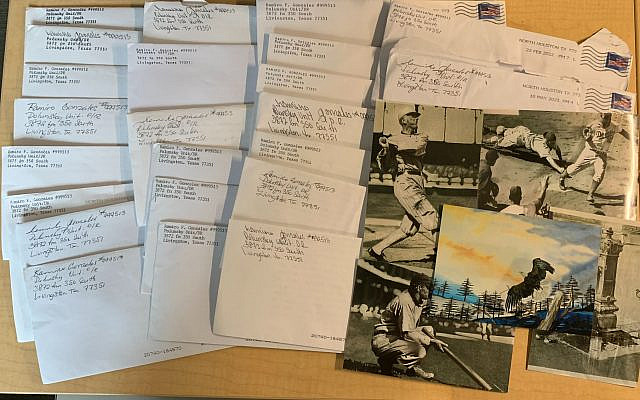 Some of the letters artwork sent by Ramiro Gonzales to Cantor Michael Zoosman (photo by the author; no copyright)

On July 13th, the proud “pro-life” state of Texas is scheduled to prevent someone from saving another human life…by killing him. July 13th is the date that you will be putting to death a man whose dying wish has long been to be able to make an altruistic kidney donation of his healthy kidney in order to save another human life. The would-be donor’s name is Ramiro Gonzales. Ramiro is guilty of the horrible crime of the murder of Bridget Townsend, of blessed memory, when he was 18 years old. Zichrona Livracha – may Bridget Townsend’s beloved memory be for an everlasting blessing, and may her abiding spirit be a loving guide to us all…

Ramiro openly admits his guilt and takes full responsibility for his actions. He makes no excuses, despite the fact that at the time of the murder he was gripped by a serious drug addiction rooted in prenatal substance exposure and childhood trauma, abuse, and neglect. Ramiro indicates all of this quite clearly in his recently released clemency video here:  https://vimeo.com/723160275 (password: RAMIRO), but I have known this for well over a year now. Why? It happens that we have been in close correspondence…

A few words about me are in order here. I am a Cantor (ordained Jewish clergy), a former Jewish Prison Chaplain, and a current multifaith federal hospital chaplain. I also am a third-generation Holocaust survivor and the founder of “L’chaim! Jews Against the Death Penalty.” Our group opposes state killing of both the innocent AND the guilty by any means, including via lethal injection, which of course was first implemented by the Nazis as part of the Aktion T4 protocol to kill people deemed unworthy of life, as devised by Dr. Karl Brandt, personal physician of Adolf Hitler. Our motto in L’chaim are the famous words of Holocaust Survivor and Nobel Laureate Elie Wiesel (1928-2016), who famously said of capital punishment “Death is not the answer.” Prof. Weisel also said: “With every cell of my being and with every fiber of my memory I oppose the death penalty in all forms. I do not believe any civilized society should be at the service of death. I don’t think it’s human to become an agent of the angel of death.” Amen.

Weisel’s charge leads us to write letters and emails offering spiritual support to anyone in our nation faced with the abomination of state killing. Some individuals respond – many do not. Ramiro eagerly replied to my first email to him on January 24, 2021 after I learned of his pending execution, which was set to take place on Hitler’s birthday later that year.

Ramiro was the first person in Texas with whom I corresponded and has since been a faithful pen pal and friend. He has sent me dozens of letters since January of last year, and I have responded to each. It has been very clear to me from his first letter that Ramiro is a person of profound faith in his own Messianic Christian tradition. He has expressed sincere repentance for the life of Bridget Townsend, of blessed memory. He has written to me with great respect and interest in Jewish ideas about repentance and forgiveness, and upon his request, I have sent him religious materials and books on spiritual matters.

Early in our correspondence, it happened that a member of my home congregation – Adat Shalom Reconstructionist Synagogue in Bethesda, MD – informed us of her need for a kidney donor. I put the word out far and wide on email and social media, but there was no one who responded. When I mentioned this to Ramiro, he immediately and unequivocally indicated his hope of being able to do this. In his letters to me, he expressed his desire to be able to give new life after he had taken another – and before Texas took his own. He knew that his altruistic action would not stop his execution. He only wanted the chance to help another human being in need. When this specific opportunity to donate to a member of our congregation was no longer available, Ramiro eagerly explored how he might be able to donate a kidney to another in need before his execution.

As a prison chaplain, I have known many convicted criminals in my time, both the innocent and – like Ramiro – the guilty. Some, to be sure, might attempt a maneuver like this to try to beat the executioner’s sword. Nothing in this world would convince me that Ramiro’s desire to be an altruistic kidney donor is motivated by a last-minute attempt to stop or delay his execution. I will go to my grave knowing in my heart that this is something that Ramiro wants to do to help make his soul right with his G-d.

And yet, what is the response of your “pro-life” state?

It has been to REJECT Ramiro’s request to be an altruistic donor, and instead to KILL him before he can give the gift of life.

I ask you, dear Texans, how does this make you feel? Are you so wedded to this death fetish that you would choose it over the possibility of saving another human life?

IF you are “pro-life,” then may you TRULY be PRO-LIFE, and join us as we shall forever chant: