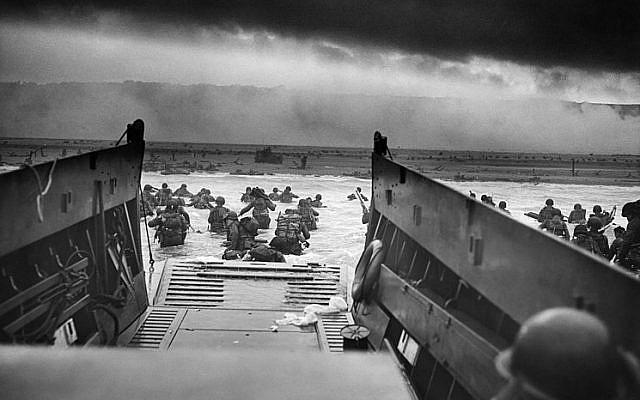 D-Day “Into the Jaws of Death” (Public Domain)

We Americans know June 6 very well. It is D-Day – the date in 1944 of the Allied invasion of Normandy in Operation Overlord during World War II. D-Day was the largest seaborne invasion in history. It led to the liberation of France (and later western Europe) and laid the foundations of the Allied victory on the Western Front.

This year, Oklahoma transformed June 6 from D-Day into Death Day.

It was on June 6th that federal Judge Stephen Friot issued his ruling that Oklahoma’s lethal injection protocol is constitutional, opening Pandora’s box and clearing the way for the state murder of 28 human beings on the Oklahoma Row of Death who were plaintiffs in the case. https://www.newsweek.com/oklahoma-death-penalty-protocol-upheld-midoazolam-1713403 On cue, thr Oklahoma attorney general already has requested death dates for 25 of these human beings, hoping to spread eqch state murder apart by one month. https://kfor.com/news/local/oklahoma-attorney-general-requests-dates-to-execute-25-death-row-inmates/ If the AG’s request is accepted, it would make Oklahoma one of the most executing jurisdictions per capita in not only the US, but across the world.

Is this the kind of American freedom for which our ancestors fought so bravely on the shores of Normandy on this solemn day 78 years ago? Namely, the freedom for the state to kill our prisoners? This applies to BOTH the innocent and the guilty. Indeed, some of those in line for state killing are themselves military veterans, such as James Dailey in Florida, and John Henry Ramirez and John Theusen in Texas, among others. Recall that on D-Day we were fighting the Nazi regime –  the SAME REGIME that was the first to implement lethal injection in this world of ours. The Nazis utilized it as part of their infamous Aktion T4 protocol to kill people deemed “unworthy of life,” as devised by Dr. Karl Brandt, personal physician of Adolf Hitler. Is this the legacy that Oklahoma now wishes to associate with June 6th?

Many are quick to forget this Nazi legacy of lethal injection. Those of us who refuse to see this connection would do well to be reminded that “not see” and “Nazi” are homonyms begging us to open our eyes to this direct link. We, the 1500+ members of “L’chaim! Jews Against the Death Penalty,” shall NEVER forget this historical fact! Many of us, like myself, are direct descendents of Holocuast survivors. We also NEVER FORGET the words of Holocaust Survivor and Nobel Laureate Elie Wiesel (1928-2016), who famously said when asked about the death penalty that “Death is not the answer.” Professor Wiesel also said this:

For perspective on where the Sooner State and America land on this issue, consider that more than 70% of the nations of the world have abolished the death penalty. Just this past month, our world witnessed abolition in the Central African Republic (https://africa.cgtn.com/2022/05/28/c-africas-mps-vote-to-end-capital-punishment/?fbclid=IwAR0MSys8H-2TCafdsh5Fx7K3v882mHwdgGkM0NATU1EHliFa_0EMnPjSw8c) and Zambia (https://l.facebook.com/l.php?u=https%3A%2F%2Fwww.africanews.com%2F2022%2F05%2F25%2Fzambian-president-announces-big-decision-to-abolish-death-penalty%2F%3Ffbclid%3DIwAR0cqvFtdQ5J6iddFxWIIGRiqvClJBa2csf5pkJlo8yQ4jrkrzhoh0beTEo&h=AT3fjoJX0R5KLDWcBpiivShJfREjFow09KjN7utU6Be0y2b4gndCo-MJkm21kzM1wCM7g4qHqGQ61_6-PwoulYdDhwAsrzuRTsfq318A-yZZYCNWejUVd5vJp0gm8_qMJHup&__tn__=%2CmH-R&c[0]=AT1AI-xpqP7v_0aB3d2ZaSisghOehXUuTvpLwH1xLiV3NpIn-4U_k86Kki3oGugAWt6eiJxCFPPPgDNCP8_oNCKZqayegkeDUjOPYwP1l4AOYIZCA2ToL2xhvS0BYWMpXr9Cu3P2joQbFSg0QmeV3KKzmqWqRtjntmg).

Consider, as well, Canada’s recent Supreme Court ruling, which found that a federal law that effectively allows judges to sentence criminals to life in prison without parole is unconstitutional. Canada’s highest court concluded that life without the possibility of parole violates protections against cruel and unusual punishment and brings “the administration of justice into disrepute.” https://www.washingtonpost.com/world/2022/05/27/canada-supreme-court-life-without-parole-bissonnette/  Now, contrast this with the US Supreme Court’s ruling in Shinn v. Ramirez in the same month that evidence of innocence is not enough to stop an execution. https://www.thedailybeast.com/the-supreme-court-just-said-in-in-shinn-v-ramirez-that-evidence-of-innocence-is-not-enough (Please see related petition here from Death Penalty Action: https://actionnetwork.org/letters/execution-of-the-innocent-is-unacceptable-congress-fix-this-now/

I ask again: is this the kind of freedom that we defended on the shores of Normandy?  The freedom for the state to murder the innocent?! Or, perhaps we fought for the freedom of Rows of Death in our  nation to ban books on death penalty abolition by peaceful interfaith groups like ours, as Tennessee did earlier this year. https://www.tennessean.com/story/opinion/2022/05/18/tennessee-prisons-wrongly-ban-death-penalty-abolitionist-book/9798664002/ Is it this freedom to defend the machinery of death that we wish to honor and uphold?

As to the guilty, contemplate for a moment this epiphany of Alfred Camus: “But what then is capital punishment but the most premeditated of murders, to which no criminal’s deed, however calculated it may be, can be compared? For there to be equivalence, the death penalty would have to punish a criminal who had warned his victim of the date at which he would inflict a horrible death on him and who, from that moment onward, had confined him at his mercy for months. Such a monster is not encountered in private life.”

Camus’ point is particularly striking for those like us who correspond regularly with people on Rows of Death in Oklahoma and across the US who we as a society are seeking to kill. In doing so, we witness first-hand the psychological torture that our society is enabling as these individuals are made to count down their days to the moment of their killing. We realize the soul-shaking shame of this torture being carried out in OUR names.

And finally, consider this:  Frank “Ephraim” Atwood was the latest American execution victim. Ephraim’s mother had a Jewish father and had to flee the Nazis in 1939. Arizona gave Ephraim the “choice” of whether to be killed by Zyklon B, the gas used in Auschwitz, or the T4 needle. https://blogs.timesofisrael.com/passover-reflections-sophies-choice-2-0/. As if this were not enough, Ephraim then was given the “liberty” of explaining to his masked executioners how best to put him to death in Arizona on June 8th, when they deferred to HIS expertise on where in his body to place the Nazi needle. As reporter and execution chamber witness Jimmy Jenkins reflected:  “My god,” I thought to myself, “the execution team is taking direction from the man they are attempting to execute.” https://www.azcentral.com/story/news/local/arizona/2022/06/08/republic-reporter-describes-witnessing-frank-atwood-arizona-execution/7561081001/

Once again: are these the freedoms of choice – the American exceptionalism – for which we fought the Nazis?

The death penalty is the most egregious aspect of our fundamentally broken penal system. It is founded upon an entirely false sense of moral equivalency and has no place in any society that intends to call itself “civilized.” It condemns us ALL infinitely more than anyone who is condemned to die in its vice grip. If we are wondering what should replace the death penalty, it is simple: NO death penalty. We must get on the right side of history, for G-d’s sake, if not for our own! We must tell our elected officials to remove the Angel of Death from this land. We owe it to our souls and to the souls of all who fought and died for this nation to redeem our country from the abyss of death into which we are descending. We MUST respect the human right of life. If we do not…for what have we sacrificed?

NOTE: This post first appeared as an Op Ed in the Black Wall Street Times in Oklahoma on June 14, 2022.