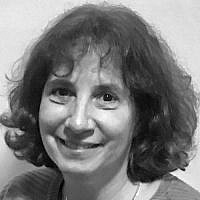 The Blogs
Tamar Bar-David
Apply for a Blog
Please note that the posts on The Blogs are contributed by third parties. The opinions, facts and any media content in them are presented solely by the authors, and neither The Times of Israel nor its partners assume any responsibility for them. Please contact us in case of abuse. In case of abuse,
Report this post.

Then, the rumors that I started to hear became true. And miracles, or gifts from G-d as I like to call them, started happening to me. The 14 day period of isolation was decreased to 12 if you were tested before day 12 and had two negative Corona tests. Two less days, that’s a gift! Suddenly, time had a different meaning for me than in the past. It was as if I received a gift of two free days!! My anxiety lifted just a little. Friends of ours allowed me to stay in their lovely home with a garden for the 12 days, another gift. Of course, as life will have it, the challenges also began. Another traveler on my plane accidentally took my suitcase and left me with theirs instead, as both were identical suitcases. Only in Israel during Corona, would both suitcases be filled with baby clothes, toys, and other items for a family expecting a new baby. Why? Because we were one of the lucky few to be allowed to enter into Israel on a special “Grandparents to be” visa. It took more than a day, but soon the suitcase was back in my hands and the 10 Amazon purchases my children were eagerly waiting for were able to be distributed.

Days 1- 3 passed by and I actually enjoyed the quiet, the lack of schedule, the ability to just sit and think. I was able to do my job remotely and worked daily from 4 pm-12 am, and work on tasks that I did not like doing in America. Somehow, here I was happy to have tasks to fill my time and force my brain to stay active and focused. It was actually nice to do work that I had disliked before, simply because I did not need to wear a mask over my face as I had for the past few months.  I was able to breathe again.  Shabbat was coming, and my daughter was now overdue to have her baby. How was I going to get through Shabbat alone? Friday night dinner took exactly three minutes. It was amazing to experience how quickly a person can eat when there is no one to talk to. The next morning as I was davening outside, my next miracle happened. I was sitting by myself (obviously), and I suddenly heard the sounds of tfila/prayer. I looked all around me but there was obviously no one nearby due to my quarantine status. I walked to the back of the backyard, pushed through some trees and suddenly I saw what looked like an outdoor minyan about to begin.  Men, women, teenage girls and boys, mothers with strollers, grandparents, all were coming to what looked like an outdoor park area with a covered top.  Some women came wearing Talesim, some women came in pants, others wore wigs and others wore unusual head coverings.  An elderly grandfather was pushed in by his attentive grandson.  It was a real melting pot of all of Israel. (Later on I was told that it was the Shira Chadasha minyan, an Egalitarian minyan that meets weekly).  I remembered learning in the Torah about people who came down with leprosy or a sort of unknown virus (perhaps a virus similar to Corona?) and how they had to be separated from the rest of the camp.  I smiled to myself, thinking, wow, I am really reliving the times of my Jewish history.  I was similar to the one who has leprosy, and I also have to separate myself from the camp of Am Yisrael.  I was the one who had to be separated so that no one could catch the possible Corona virus that I could be carrying. The Jerusalem stone fence that separated me from the minyan put me outside the camp, but I felt grateful.  I was grateful that here I was in Bidud, but I was able to daven on Shabbat with a minyan.  I felt blessed.

Day 7 and my next miracle occurred.  I was staying in a house that had construction workers on the two top floors that belonged to another family.  The workers often sang or had music playing, but this time the music was so loud that it was hard to focus on my work.  When the music seemed to get louder and louder after thirty minutes, I went outside to see why the music was so loud.  Imagine my surprise when I realized that the music was not coming from upstairs, but from the other side of the garden.  I climbed up to the other wall, and to my surprise, a CONCERT was taking place, with 50 people of all ages, all wearing masks and sitting socially distant from each other, enjoying the live music.  Once again, I was on the other side of the fence.  I shook my head in shock.  I didn’t really understand the songs they were playing or the jokes that they were telling, but it didn’t matter.  I felt that G-d recognized my pain at being stuck inside, so he brought a concert down…..of course just for me.

Day 9 and I am starting to lose it.  My daughter gives birth to a healthy baby boy, Mazal tov!  I started to realize that my next miracle had just happened.   If my daughter Shoshana would have given birth on time, I would have had to watch the bris online even though I was in Israel, as I still would have been in quarantine.  But she was seven days late, which meant that the bris was going to be the next Monday.  Because the time for quarantine was decreased to 12 days, I would “get out” of quarantine by Sunday.  The brit was on Monday.  When I realized this, I just shook my head in wonder.  G-d was still making miracles for me.

As my daughter Shoshana had just given birth, I was not going to able to enjoy her daily visits.  I am lucky enough to get along well with her mother-in-law, who also came to Israel for the birth of this grandchild and had already finished her Bidud.  She stopped in daily and was sometimes my only form of human contact on a given day.   I had brought packages for my friend’s children, and I felt like they did me a favor in coming to pick up their bags.  I had spread out the visits over the last few days so that I could see one person every day.  A neighbor came to tell me that she had received my food delivery in error.  When she dropped if off and left, I felt like calling back to her “Don’t leave!  Please talk to me, I am starting to go out of my mind!”  But she was gone before I knew it.

Day 10-Erev Shabbat again, I have so much time on my hands and I have never made challah in Israel.  Why not?  I can’t work on Friday as American hours don’t work well with an early Shabbat.  I had included in my food delivery all of the items needed to make challah, but I realized that I forgot to order honey.  Miracle again, the home I was staying in actually had a jar of honey in their pantry!  This is beginning to sound like a Chanuka miracle, similar to the one jar of oil that was miraculously found in the Chanuka story.  I make the challah and then the boredom started to settle in again.  When I decided to try to make Chummus for the first time, the same thing happened.  The one item I was missing was also in the pantry.  Another miracle for me!

I am one of those believers who feel that there are no coincidences in life.  I believe that G-d gives challenges to everyone because he wants us to learn from these challenges, and that our lives will become more meaningful through the process of dealing with our individual challenges.  Everyone gets different challenges and everyone has to figure out how to deal with their life and overcome obstacles, and eventually learn and grow from experiencing these hardships.

I have two days left of quarantine.  I think that one of my challenges will be in remembering how isolated and lonely I felt, and how grateful I will be when I am done with this crazy quarantine and able to interact daily with people again.  Months ago I became annoyed when I would hear rabbis delivering zoom lectures about how we will come out stronger after the Corona virus is no longer with us.  I am not annoyed any longer.  I do feel stronger, now that I have seen that I can survive this difficult challenge of quarantine.  I know how lucky I was to have a comfortable place and loved ones nearby who could make this an easier time for me.  I am grateful that I was allowed in to Israel and I am heartbroken for my many friends who have still not met their new grandchildren or hugged their fast growing Israeli grand children.  I hope that I will appreciate the things that were taken away from me on a different level.  I hope that I will hug my children even more than I do, that I will enjoy the companionship of the people I love-and don’t love- just a little big more, and reach out to those who are isolated.  I look forward to the time when Corona will no longer be a worry for us.  I will try to invite more people to my shabbat table who are alone on Friday nights, as I know how hard it can be.   I know that I will appreciate simply the act of breathing, without a sweaty mask in front of my face.  I will appreciate being able to hug a friend and put my arm around someone.  I look forward to having Shabbat meals with friends again, although I do not think that I will prepare as much as I used to.  I have seen that we can live life more simply, and enjoy the simple pleasures in life such as taking a walk and playing a card game or doing a puzzle.   (Actually, I have learned that I hate puzzles).    I pray that a vaccine will be effective before the next Rosh Hashana, or the next Chanuka, or the next Purim.  It’s hard to live with the unknown.  Yet I pray that the lessons we have learned will remain with us, and that we will appreciate the good we have in our lives, without having to quarantine in the future.

About the Author
I have lived in Riverdale, New York for the past 35 years with my husband Tzvi and we have been lucky to be able to visit Israel often with our four children. Our oldest daughter Shoshana and her husband Zach made Aliya four years ago and live in Jerusalem.
Related Topics
Related Posts
Comments