When we coalesce around justice, our efforts unite in greater force.

His 15-year-old daughter Malki was one of fifteen victims of a suicide bomber at the Sbarro pizza restaurant in Jerusalem in 2001.

It was orchestrated by Ahlam Aref Ahmad Al-Tamimi, a media student and TV newsreader at the time, who actually got back to Ramallah that evening to read the bulletin. 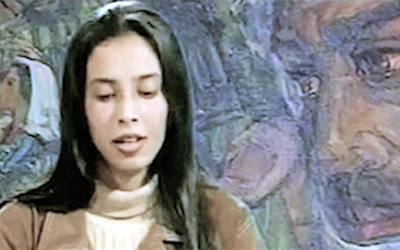 Tamimi scouted for optimum carnage and specifically to strike religious Jews. She escorted the bomber to make sure the atrocity went ahead and speaks of the unspeakable as “my operation”.

Since 2011, she’s been allowed to thrive in Jordan.

Tamimi was sentenced to 16 life terms by an Israeli court for her evil designs, but was one of over 1,000 (one thousand) prisoners freed in exchange for the release of Gilad Shalit.

Over half of those freed were convicted murderers and now live as little as a half-a-dozen miles over the border. The future security risk posed to Israel is obvious.

Now Tamimi uses her charisma and communication skills as a Jordanian celebrity and has her own TV show. She openly boasts of how she orchestrated the suicide mission while at the same time presenting herself as a victim.

Tamimi’s brass neck comes by virtue of the fact that Jordan deported her husband.

Nizar al-Tamimi was turfed out by her country’s authorities when his most recent residency papers expired. He left for Qatar but Tamimi chose not to follow him.

Enter BBC Arabic, who then profiled Tamimi without mentioning her murderous crimes in Jerusalem. More than that, she was framed as a “them and us” heroine of the struggle with Zionist Israel and the US. All the while given a platform by and the legitimacy of, a BBC watermark in the corner of the screen.

“They put lipstick on a pig”, seethed Arnold to me.

Firstly, the BBC offered a typically formulaic “sorry, not sorry” apology and took down the programme from their online services.

But since then, after pressure from Bob Blackman MP, Conservative Friends of Israel officer, they added another one. He wrote to the BBC’s new director general Tim Davie and a sorry note was shuffled out to the Houses of Parliament.

“But this is still not nearly enough”, says Arnold, who believes “the BBC have lost their moral compass” and should apologise instead “in the broad glare of daylight” to the Arabic-speaking people “who pay their wages”.

The BBC show, he says was a “toxic distortion” of Tamimi.

And this huge editorial fail speaks of something deeper at the corporation.

The BBC’s ambition is to expand its share of audience from 460 million to a one billion over the next five years. The way they can do this is by competing for viewers against the likes of Russia Today, Iran’s Press TV and Al Jazeera and Al Jazeera+.

But BBC management should be mindful of the values they claim to espouse and not just to embroil themselves in a ratings battle which would only dissipate further their historical parameters of “balance”.

The potential for lasting reputational damage to the BBC through self-harm and mission creep is a hazard those tasked as custodians of the BBC might ponder as existential threats.

If ratings are the new driving force, the BBC may as well rebrand the affected services, sell them off or close them down.

Meanwhile, Jordan permits ongoing harbour to the killer of an American citizen which Malki was through her mother.

But the Jordanian government and their king, Abdullah II, have repeatedly ignored requests by the US to extradite Tamimi to face American justice.

Jordan’s highest court ruled conveniently in 2017 that Tamimi could not be extradited to the US because the 1995 extradition treaty signed between them was not ratified by Jordan’s Parliament. This made it unconstitutional for Jordanian courts to approve US requests.

However, the US State Department subsequently told Arnold that Jordan provided them with what they termed “Instruments of Ratification” at the time, in 1995 before the treaty was signed. “In simple terms, the Jordanians are lying but no one, including the State Department, has the backbone to say so”, he tells me.

Still, the Hashemite kingdom receives $1.6bn a year in US foreign aid, second only to Israel according to US government data.

And Jordan’s just extended its peace deal with Israel to include airspace agreements.

Sudan’s impending normalization with Israel has similar contours and the US could threaten to withdraw aid if it wanted to bring pressure to bear on Jordan to extradite Tamimi.

Arnold is a gracious, intelligent and unwavering campaigner for his Malki, determined she must be never forgotten. A tribute to her tragically short life is made via the Malki Foundation and his campaign to change hearts and minds to help bring Malki’s killer and the fourteen others that day to justice is gathering pace at change.org.

When justice is spherical, in other words, when justice on numerous levels aims to reset a wicked and depraved wrong, it’s for uniquely placed men and women of goodwill in Israel, Jordan and the US to make that change.