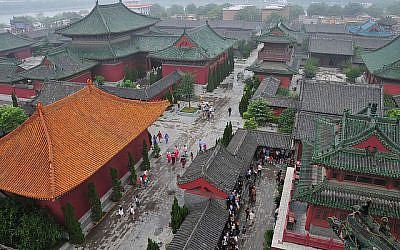 Time for rabbis to be kind?

It was a graph that convinced me that some Midrashoth (1) are true. Yes, midrashoth, those allegorical tales of the rabbinic imagination that embellish biblical stories! Some must be based on folk memories of events long ago. I could be wrong! See what you think!

This graph showed an 84% decline in population growth of the Uyghur Muslims, 3 million of whom are interred in Chinese concentration, forced labour and indoctrination camps. The decline is driven by the prolonged detention of so many Uyghur men in Labour camps and is part of a deliberate attempt to eradicate the Uyghurs as a religious ethnic entity. Marital relations are impossible. Their only contact with their wives is a 3-minute monitored video call every three months. One woman describes how they just look at each other during calls and cry, not daring to speak.

It reminded me of the midrash, quoted in Louis Ginsberg’s “Legends of the Bible,” which describes how the Egyptian enslavement of the Hebrews contained an inbuilt policy of population control. Shmot Rabbah 1.12 tells how the Egyptian Pharoah decreed that male Hebrew slaves should sleep on the ground where they laboured, instead of at home, “so that they might be deprived of the opportunity of having intercourse with their wives.”  The Egyptians were “less concerned to derive profit from the Hebrews’ labour than to hinder their increase.”

The similarities between the ancient Hebrews’ enslavement and the modern Uyghurs’ persecution do not stop there. The Sefer HaYashar (Midrash) tells how the Egyptians “deprived the Israelites of their fields and vineyards.” Uyghur women villagers, once their husbands are sent to Labour camps, are reported to have to rent out their land and sell their livestock.

The Sefer HaYashar (Midrash) also states the Egyptians told the Hebrews the work was important, and they would be paid daily “at the King’s order,” when the real plan was to “have them afterward build without wages.” Uyghurs are promised retraining, acquisition of useful skills and higher wages but in reality many labour camp internees are highly trained doctors, lawyers, teachers and academics, with even the manual workers making less than a third of their previous wage.

The uncanny similarities suggest these midrashoth at their heart may have a retained folk memory of real events, for these past and present persecutions not only seem to share behaviours across the millennia, they share underlying motives, spelled out in the biblical account. Just as the Hebrews were seen as “abominable” (Bereshit [Genesis] 43.32) because they rejected the deity of the Egyptians (according to the Onkelos, the vernacular Aramaic translation), the Uyghur Muslims are persecuted because they reject Chinese Communist Party doctrine as the primary source of happiness and meaning. Just as the Hebrews were enslaved because “when war comes, they might join with those that hate us” (Shmot [Exodus] 1.10), the Uyghurs are interred for fear they will participate in terrorist attacks against China.

Whether or not all this convinces you that some Midrash are true, what is very real is that  China’s persecution of Uyghurs has now spread to other Muslim groups like the Huis and to Christians, whose leaders are incarcerated, churches are closed and burial grounds destroyed. Life is also more difficult for the 1000 Jews of Kaifeng.

Although they have lived there since Rashi’s time, they are now forbidden to meet on Chagim (festivals) and Shabbat. Their historical sites are no longer protected, or even identified. Next door to where the synagogue stood, a new “cultural centre” monitors and interrogates visitors to the site. Things will worsen in February when “Administrative measures for Religious Groups” will harmonise cannon and national law, to ensure all religions “spread the principles of the Chinese Communist Party.” In a country where high-tech surveillance results in internment of men seen to grow a new beard, or of people observed to mutter a prayer, how long before there are once more Jews in camps?

Kaifeng Jews are intensely proud of their heritage and of Israel. Watch this video and try not to cry!   www.youtube.com/watch?v=uwAfn4g6dC4. An obvious solution to their problems is to move to Israel. Most cannot afford to do so.  Despite their pride and their retention of many Jewish practices, the Israeli embassy refuses to discuss their eligibility under the law of return and the rabbinic authorities do not consider them Jewish, due to their longstanding tradition of patrilineal descent. However, in the past, dozens have made Aliyah and converted.

The West is now acting against China’s human rights record, despite China’s technological, economic and political power.  One American commentator states, “This is not about China anymore or Chinese Government. This is about who we are as a people, a civilisation.”

Similarly, Israel’s response to the Kaifeng Jews’ predicament, may tell us a lot about who we are as a Jewish civilisation. I understand the rabbinic reluctance, but given that Kaifeng Jews are too Jewish to be free in China, and not Jewish enough to be free in Israel, isn’t one’s natural sensibility to respect their sense of Jewish heritage and identity?

It is forbidden for religious behaviour to compromise a personal, natural, moral sensibility. If it does, our fear of heaven is no longer pure…. and we have certainly been mistaken in our faith   (Orot HaKodesh 4e).

Will the Rabbis continue to prioritise halachic purity over potential pikuach nefesh (saving life) and the natural moral sensibility to respect ten centuries of Jewish history, practice and identity? How Israel responds, not only to China, but to the Kaifeng community’s crisis as China ratchets up its persecution of all religions, will say a lot about who we are as a Jewish people and civilisation. Not least the type of Judaism our state observes.

There is a reason the “strap line” of my blog is “A bit more chesed wouldn’t hurt.”