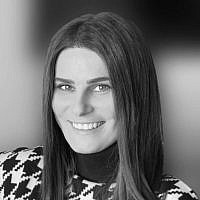 Leaving a trail of collateral damage on its path towards so-called equitable justice, the woke movement has made the fight to combat the disturbing surge in antisemitism even more challenging.

In May, a group of Jewish parents and teachers in Los Angeles filed a federal lawsuit against the Los Angeles Unified School District, one of the nation’s largest public school districts, challenging antisemitic and antizionist materials in school curricula.

The suit alleges that current curricula include materials that misrepresent Jews as “colonialist” and mislabel Israel as a “settler-state” founded on “genocide.”

The “woke” mistakenly view all American Jews as white, educated, and successful, and mis-classify Jews in the “oppressor” category. Many involved in woke activism recklessly divide social groups into two categories: “the oppressed” vs. “the oppressors.”

Despite the painful history of suffering that has plagued Jews for thousands of years, including the most horrific genocide in modern-day history during the Holocaust, Jews have been repeated victims of woke antisemitism.

This form of antisemitism is especially dangerous when embedded in our children’s education.

Just this month, the Brentwood School – which is a private school in Los Angeles, was sued by the parent of an eighth-grade student over radical and excessively “woke” materials and programs in the school’s curriculum.

During one class, students had to participate in an exercise on ‘Becoming Anti-Racists’, that would apply stereotypes to the students’ cultural identities and force them to engage in activism based on those stereotypes.

Alleging antisemitism, the lawsuit accuses the Brentwood School of “racializing its policies” while lacking consent from parents. Additionally, Jewish parents were prevented from participating in curriculum discussions when “The Office of Diversity, Equity, and Inclusion” rejected efforts to form a Jewish affinity group.

The adoption of antisemitic materials and misinformation in school curricula derives from the stereotype of Jews finding success despite systemic antisemitism. This inaccurate narrative then negates the Jews’ well-documented plight as a marginalized people.

The reality is that Jews comprise slightly more than two percent of the U.S. population yet are victims of nearly 60 percent of faith-based hate crimes, according to recent FBI statistics.

As the Executive Director of StopAntisemitism, a watchdog organization with a mission to expose and hold all antisemites accountable indiscriminately, I have personally witnessed the woke movement’s double standard against Jews.

If a perpetrator of antisemitism is a person of color or of the Muslim faith, the “woke mob” stands up to protect them by crying out “racism” or “Islamophobia” demanding a free pass for their antisemitism.

Even back in the early stages of coordinating the first Women’s March in November 2016, organizers “asserted that Jewish people bore a special collective responsibility as exploiters of black and brown people, and even, according to a close secondhand source, claimed that Jews were proven to have been leaders of the American slave trade,” according to Leah McSweeney and Jacob Siegel in Tablet.

Meanwhile, the Black Lives Matter organization’s political platform called Israel “an apartheid state” and argued that by providing military aid to Israel, the U.S. is “complicit in the genocide taking place against the Palestinian people.” Similarly, the LGBTQ movement has denied Jewish organizations participation in local pride parades, claiming Zionism is an “inherently white supremacist ideology.”

For woke activists, it appears the only acceptable time to condemn antisemitism is when it emanates from a straight, white conservative. Otherwise, the incident is completely ignored.

We must move away from this idea of a gate-kept hierarchy of oppression and focus on identifying unethical bigoted behavior for what it is.

Antisemitism is wrong no matter the source and a history of oppression does not give anyone license to discriminate.

At its best, the woke movement does what we do: call out and try to correct injustice against marginalized groups. At its worst, it creates destructive lose-lose situations by pitting those groups against each other and misinforming students in both public and private school settings.

To truly emerge as a seeker of justice, the woke movement needs a nuanced mindset that sees beyond skin color, embraces compassion for those subjected to bigotry, and fights to protect Jews from wrongful antisemitism as it does other marginalized minorities.

Liora Rez is the Executive Director of the antisemitic watchdog group StopAntisemitism.

About the Author
Liora Rez has written extensively on the topic of antisemitism. Her articles have been published in prominent outlets including CNN, Newsweek and The Jerusalem Post. In 2019 and 2021, The Algemeiner named Rez one of “The Top 100 People Positively Influencing Jewish Life."
Related Topics
Related Posts