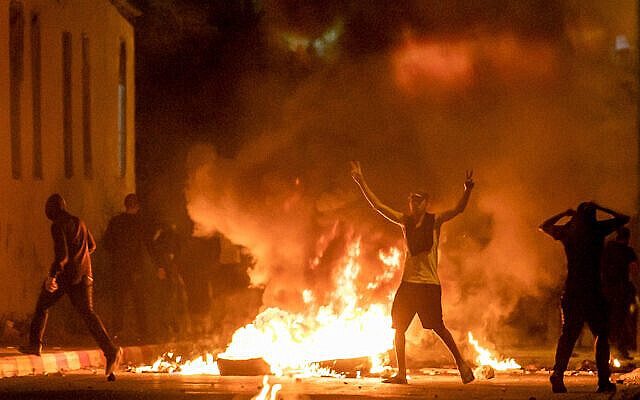 Police officers clash with Arab Israeli rioters, in Ramle in central Israel, on May 10, 2021.(Yossi Aloni/Flash90)
(English below)
إلى أصدقائي العرب: لقد مزقت قلبي صور اليهود يهاجمون المتاجر العربية ويهاجمون المارة العرب. إنني أدين هذا السلوك بشكل قاطع ، وأقدم تعازيّ للضحايا. هذا ليس ما نحن عليه كدولة أو كشعب. سنكون أفضل. يجب أن نكون.
To my Arab friends: The images of Jews attacking Arab stores and lynching Arab bystanders have torn my heart. I condemn and reject this behavior unequivocally and extend my condolences to the victims. This is not who we are as a country or as a people. We will be better. We must be.

To my Jewish friends: I know how hard this is. The sleepless nights in the bomb shelter and terrified children. The fear of going out and being attacked for who we are, simply for living in our homeland.

Nonetheless, we cannot forget that the Arabs demonstrating and rioting in the streets right now are the same ones that have lived peacefully alongside us all these years. These violent attacks are indefensible, and I hope the police will do everything in their power to restore order – but at the same time, it is so important for us to understand that this did not come about in a vacuum. These Arabs are not trying to drive us off our land, or kill every Jew they catch. They are expressing the pent-up anger and frustration of years – decades – of Jewish contempt for them, disregard for their rights and neglect of their communities.

They are tired of being treated first and foremost as a threat and a nuisance in their own country. They are sick of seeing their Jewish neighbors gleefully rejoicing and taunting as Arabs are evicted from their homes under the laws of a discriminatory regime. They are tired of seeing their elected representatives treated as lepers and ostracized in the Knesset. They are tired of watching the suffering of their relatives in the territories and experiencing the callous disinterest that we, as a nation, have shown toward ever releasing them from the grip of military occupation.
It is important for us to recognize this fact because this conflict has been simmering under the surface, waiting for a spark to ignite it, for years. No curfew or riot-dispersal squad can put this jack back in the box. It will only fester, spread and find new places to kindle anew if we do not address the pervading injustices of our society at the source. There is no other effective way to restore our peaceful coexistence.

Israel was founded from its inception to be a country “for the benefit of all its inhabitants; […] based on freedom, justice and peace as envisaged by the prophets of Israel; it will ensure complete equality of social and political rights to all its inhabitants irrespective of religion, race or sex; it will guarantee freedom of religion, conscience, language, education and culture; it will safeguard the Holy Places of all religions; and it will be faithful to the principles of the Charter of the United Nations.” This is a direct quote from the Declaration of Establishment of the State of Israel of May 14, 1948 – a document that has been recognized as legally binding upon our legislature.

In failing to live up to this vision, we have betrayed our own laws and the very premise of the Zionist project. The fact that Israel was founded as the Jewish homeland was never intended to excuse inequality or injustice, or to allow us to reconcile ourselves to a reality where minorities are afforded second-class status before our state’s institutions.

Not just for our Arab neighbors, and not just for our children’s future – but for ourselves, our humanity and our Jewish souls: We must be better. We must not allow this reckoning and the blood that has been spilled to be in vain. When order is finally restored and the rockets have been silenced, we must seize this inflection point for what it is, and chart a course anew for the Zionest project; one that grants the nation of Israel more than mere survival, but peace, justice and the fulfillment of the Zionist promise to be a country for the benefit of all its citizens, a nation built on freedom, justice and peace as envisaged by the prophets of Israel.
About the Author
I was raised in a small Ultra-Orthodox community in Milwaukee, and made Aliya at the age of 18. I volunteered in the IDF and continue to serve in the reserves. Today I work and research in the field of law, while enthusiastically pursuing my hobbies of historical and political research and discourse. I am a husband and father of three.
Related Topics
Related Posts
Comments