Since at least the Hebron massacre of Jews by Arabs in 1929 we have been witnessing the clash between Khaybar vs Kishinev. We see it every time a Palestinian tries to murder a Jew, when the Palestinians in Gaza “march” to remove the fence on the border and when Jews defend themselves.

The Gazans marching at the fence have been shouting “Khaybar! Khaybar! Ya Yahud! Jaish Muhammad Sawfa Ya’ud! [Khaybar, Khaybar, O Jews! The Army of Muhammad Will Return!]” You’ll hear the same chant at anti-Israel rallies around the world. 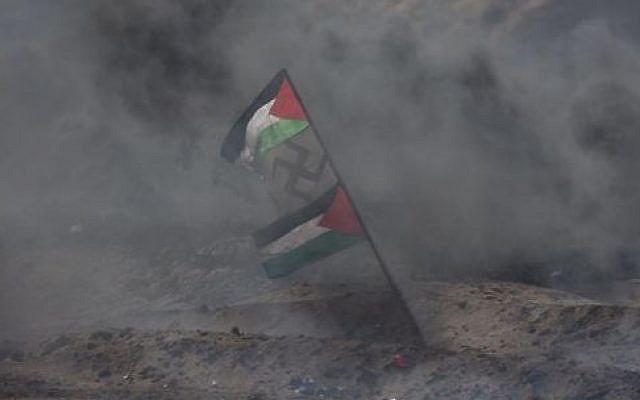 Palestinian flags and a swastika are seen amid the black smoke of Gaza demonstrations, April 6, 2018 (IDF Spokesperson Unit)

Khaybar was an oasis in the Arabian desert that had a large Jewish community in the 600s. According to Hagai Mazuz, “The Jewish community of northern Arabia was one of the largest ancient Jewish communities in the history of the Jewish people.” In 628 CE the Jews of Khaybar were slaughtered by adherents of the new religion known today as Islam. Muhammad himself is said to have taken part in the massacre of the Jews of Khaybar and also took for himself a Jewish wife, Safiyya bint Huyayy, with whom he did not have any children.

Kishinev was the massacre of Jews in 1903. 49 Jews were murdered and mutilated, hundreds of Jewish women were raped and many others left wounded. The Jews had few means of defending themselves and many were too scared to do so. The massacre was the tipping point for many European Jews to move to the pre-state Yishuv and push to create the modern State of Israel. 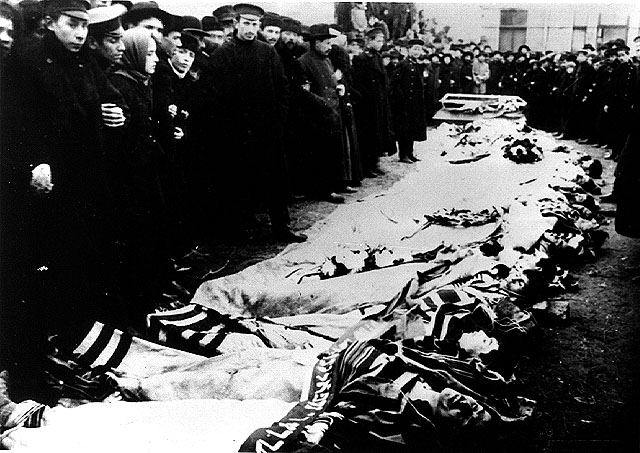 A photograph taken following the Kishinev pogrom in 1903, when 49 Jews were murdered following a ‘blood libel’ against the Jewish community. Here, the victims are laid out wrapped in prayer shawls prior to burial (public domain)

It lead Nachman Bialik to write a scathing poem called, “In the City of the Killings.” Bialik wrote, “Do not fail to note in the dark corners of Kishinev, crouching husbands, bridegrooms, brothers peering through the cracks of their shelters, watching their wives, sisters, daughters writhing beneath their bestial defilers, suffocating in their own blood, their flesh portioned out as booty.” Kishinev became a symbol of Jewish weakness. The State of Israel is an expression of the determination that “Kishinev will never happen again.” Every time you see a Jewish soldier with a gun this is the response to Kishinev. 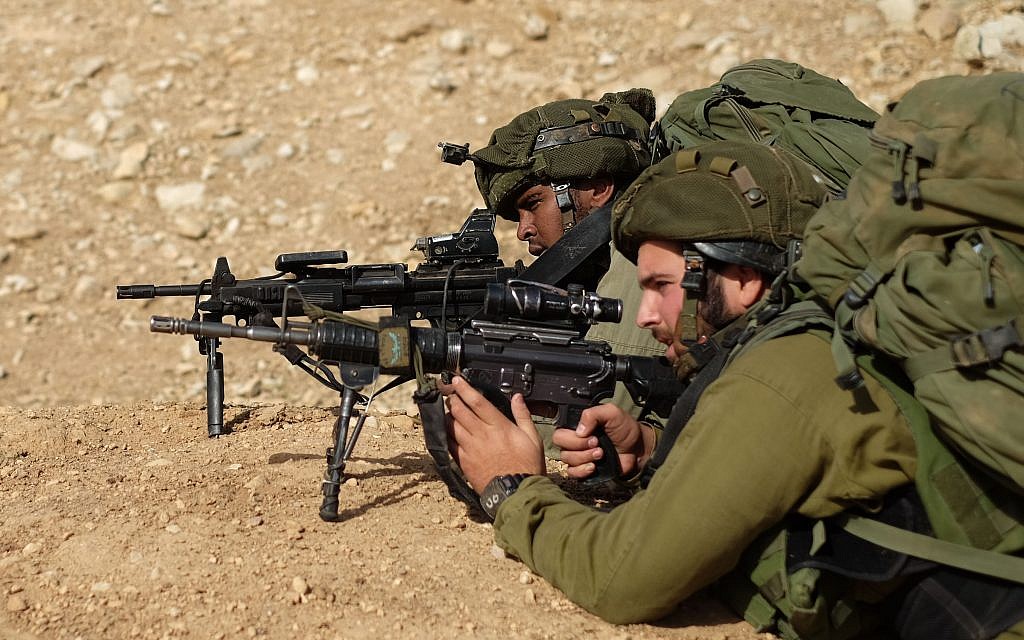 Soldiers from the IDF’s Kfir Brigade open fire on targets during a training exercise in the Jordan Valley on November 28, 2017. (Judah Ari Gross/Times of Israel)

So, when we see Gazans trying to storm the border and flood into Israel—holding flags with Nazi symbols and Palestinian flags together—shouting “Khaybar! Kharbar!” their intentions are clear. On the other side are Jewish soldiers in the army of the State of Israel with their guns pointed towards the marchers saying with their actions that we will never let Kishinev happen again.

It’s the clash between Khaybar and Kishinev. This clash has been going on for over a hundred years now and even though at times there are setbacks, every single time, eventually, the Jewish response to Kishinev always wins. In the battle of Khaybar vs Kishinev the determination to live and build is greater than the desire to destroy.

About the Author
Barak Hullman studied for a PhD in Islamic History at the Hebrew University of Jerusalem (MA at Princeton). He made aliyah from South Florida in 1995. He lives in Jerusalem, Israel with his wife and their 7 children (all born in Jerusalem). Barak is the author of two books, Figure It Out When You Get There: A Memoir of Stories About Living Life First and Watching How Everything Else Falls Into Place and A Shtikel Sholom: A Student, His Mentor and Their Unconventional Conversations, available at bit.ly/barakhullman. He has two podcasts, Jewish People & Ideas: Conversations with Jewish Thought Leaders (guests have included Yossi Klein Halevi, Michael Oren, Natan Sharansky, Daniel Gordis and others) at jewishpeopleideas.com and The Chassidic Story Project at hasidicstory.com.   Learn more by going to barakhullman.com.
Related Topics
Related Posts
Barak Hullman
Comments