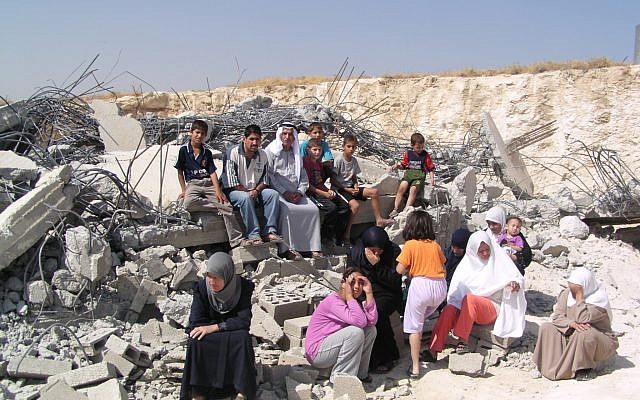 I just heard that the Palestinian villages of Dir Dibwan and Anata have petitioned the High Court to demolish homes built without permits in the same Kfar Adumim that has been relentlessly pressing for the demolition of the Jahalin Bedouin school and homes built without permits in nearby Khan Al Akhmar. One of the goals is to demonstrate that the decision whether or not to carry out demolition orders is done with what this week’s Torah portion calls “eifah v’eifah.” (Deuteronomy 25: 13-16) In the Torah portion this specifically prohibits the use of unequal weights and measures. However, our sages expanded this to include acting with discriminatory double standards. As I have recalled in the past, my rabbi and teacher Rabbi Ben Hollander z”l would often remind us that Rashi teaches that we are reminded of what Amalek did to us immediately after the prohibition against eifah v’eifah because we open ourselves to an attack by Amalek when we act with eifah v’eifah. (I highly recommend To Be Continued, a recently published collection of Rabbi Hollander’s teachings on the weekly Torah portions.)

Amalek attacked the weak stragglers. Eifah V’Eifah behavior is often practiced by the powerful against the weak and powerless.

I have mixed feeling about this court appeal. It is of course outrageous that those who most self righteously call for the demolition of Palestinian homes under the guise of “law and order,” violate the very same laws. On June 6th, the Hebrew language Yedioth Aharonot ran an expose based on research by the NGO Kerem Navot (Navoth’s Vineyard) on how 15 past and present Regavim staffers and activists are living in illegal structures. Regavim is an NGO leading the charge to demolish illegal Palestinian homes in the Occupied Territories and the Negev. They were also furious a few years ago when their own report on illegal building in settlements was leaked.

However, one of the arguments that Regavim and others often use is that the law must be applied fairly and equally to all. Not only isn’t the law being applied equally, but it shouldn’t Not only does the Regavim claim misrepresent whose homes are more likely to be demolished, but it ignores a larger and overriding form of eifah v’eifah:

Palestinians in the Occupied Territories can’t vote for the Knesset. They aren’t Palestinian judges on the courts they must go to if they wish to appeal demolition orders. They aren’t on the planning and zoning committee that decides where they can build legally, and generally where they can’t. It is not fair or just to apply the same laws to them that are applied to those who are part of the democracy that created the laws.

“No taxation without representation.”

In other words, not only should there not be more stringent enforcement against Palestinians or Israeli Arabs, but particularly in the case of Palestinians they shouldn’t be held to laws that they didn’t have an equal hand in creating. The purpose of international law regarding occupation is to protect the unprotected by providing a counterbalance not under the control of the occupying power. However, we neither make Palestinians part of our democracy, nor afford them the protections of international law. They are entirely dependent on our beneficence and unilateral moral determinations, or lack thereof.

The chances of Palestinians being treated fairly in such a situation are close to zero.

Power imbalances don’t only lead to eifah v’eifah denying housing to non-Jews. The struggle for public housing for all Israelis begins with the decision to provide housing they eventually owned for some Israelis in moshavim, whereas others were relegated to public housing they did not own.

In our Torah portion we are also commanded not to enter somebody’s home to collect a debt. Rather, we are to let them come out to meet us. (Deuteronomy 24:10-11) Every time I read this I reflect on the importance of a home as a safe sanctuary from life’s slings and arrows. For Israelis living in poverty, stable housing is an important factor determining one’s ability to escape poverty. For women in traditional societies where their role is in the home, losing their space can lead to terrible trauma. For non-Jews on both sides of the Green Line, the inability to build on one’s own land is a form of dispossession, forcing them into the areas where they can put a roof over their heads.

On this Shabbat in this month of Elul, may we rededicate ourselves to building a society in which, without discriminatory double standards, every person has the security of a home.