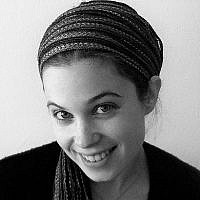 The Blogs
Meredith Rothbart
Apply for a Blog
Please note that the posts on The Blogs are contributed by third parties. The opinions, facts and any media content in them are presented solely by the authors, and neither The Times of Israel nor its partners assume any responsibility for them. Please contact us in case of abuse. In case of abuse,
Report this post.

Late last night, I received a tense phone call from the director of a Jewish summer camp. Members of his local community were upset after he raised a Palestinian flag alongside the Israeli flag they raise daily, as a gesture to welcome a group of Kids4Peace youth to camp. These teens, Jewish, Christian and Muslim, Israeli and Palestinian, had come to camp to share the stories of their life in Jerusalem and their courageous work for peace.

His fear of losing community support because of the flag raised a larger existential question — how can we support Israel and at the same time express our desire for real peace? What should I tell him?

I grew up in an American Jewish bubble: Jewish neighborhood, Jewish school, Jewish summer camp, Jewish youth movement. I idolized my Israeli camp counselors and Hebrew teachers–with their courage, creativity, and worldly experiences. At age 10, I promised myself I would make aliyah, literally meaning “ascend,” the term for moving permanently to Israel.

During university, I tried to become as Israeli as possible. When an opportunity arose to travel to Poland, my Israeli camp friends said I have to go on the trip, just like they did in high school. On this trip, I faced my family’s heritage for the first time — seeing my own Hebrew name engraved in stone at a Nazi death camp. It was there I really committed to strengthening my heritage (which I did soon after by studying at Nishmat, a leading religious Zionist women’s seminary in Jerusalem) and committed to defending my people (which I later did by serving in the IDF).

That next summer — with a few-months break between seminary and the army — I randomly volunteered to serve as a Jewish advisor at a Kids4Peace summer camp. I had no idea that this spur of the moment decision — to fill in for an Israeli who was denied a visa –would change my life path forever. As a college-educated, seminary-studying young Jewish leader — I quickly realized I not only knew nothing about Palestinians, but I’d never even met one.

I said a million wrong things, and realized quickly that without the kindness and openness of a Palestinian colleague Saed, I’d be completely lost. He showed me his ID and explained how he is from Jerusalem, lives in Jerusalem, and yet has no citizenship at all — not Israeli or Palestinian. He explained the complexity of being a refugee in his own land. He showed me pictures of his kids and his home, inside Kalandia refugee camp right next to the main checkpoint between Jerusalem and Ramallah. Saed welcomed my ignorance and curiosity. He taught me that in Kids4Peace, we don’t apologize for being who we are; we do our best to work together for peace. I felt challenged to learn the most I could about the conflict from both sides and to serve as a kiddush Hashem, a sanctification of G-d’s name by committing myself as a religious Jew to making peace within the current seemingly hopeless reality.

In Hebrew, the word for reality is מציאות (metzi’ut), which comes from the root word “to find.” Today in Jerusalem, we find ourselves surrounded by a violence so familiar, we’re barely even phased. Today in Jerusalem, I personally find myself as the Israeli co-director of Kids4Peace Jerusalem, a thriving grassroots cross-border interfaith community in Jerusalem, and, at the same time, a mother of two young Israeli children growing up in the Religious Zionist educational system. Now as a Kids4Peace board member, Saed continues to guide my journey.

There’s an activity we do with our eighth graders each year as they explore the challenges of identity — an activity including pieces of paper with tons of options to define oneself. As part of our staff training, we practice many of the youth activities and walk through the process together.

We take these pieces of paper and design a shape with all of the pieces that we decide identify us. We then walk around, looking at each others designs and asking each other questions.

For my design, I add in mother on one of the blank pieces of paper. I choose Jewish. I choose religious. I choose Zionist. I choose activist, peace-maker, and several more.

“No, Mer. It’s not okay. How can you be a Zionist and a peace-maker? It’s not possible,” challenges a Palestinian friends and colleague. After asking him to elaborate a bit, we decide this is an important opportunity for a conversation about who we are and what brings us to this work.

He tells me that it hurts him that I use the word Zionist to define myself. That this word is loaded with violence, pain, and occupation. How dare I? He tells me it’s hard for him to hear about my military service in the IDF where I served in the Civil Administration the West Bank. Am I not ashamed?

I listen. I hear him. It makes sense to me that this is hurtful for him and I don’t want to hurt him. I care about him. Yet this is who I am and what I believe. So, what do we do from here?

I explain that I would never want to hurt him or my other Palestinian friends. I reiterate that I appreciate his honesty and that it’s important for us to have these real conversations, modelling the work we’re asking our youth and parents to do.

I then explain what Zion means to me — and what I believe it’s supposed to mean. Used throughout the Jewish Bible and prayers, Zion refers most commonly to Jerusalem and at times all of biblical Israel. It’s used when the Jewish people are longing to return home in peace, to welcome G-d’s holy presence in a rebuilt Jerusalem.

My Palestinian friend and colleague listened to my words with an open mind. We continue every day to struggle together, talk and listen honestly, and work side by side for peace.

As I’ve joined millions of Jewish immigrants returning home to Israel after 2,000 years in exile, I recognize that this return has been complicated. I recognize that the term Zionism has been used in a context that is political and often violent. I recognize the suffering of my Palestinian friends, colleagues and neighbors. I struggle with the complexity of my people’s relationship to this land and our relationship to the people who were already living here when we began to return home. I must do my part, day in and day out, to create the peaceful Jerusalem I believe we should be and could be living in together.

When at Kids4Peace camp, I overhear a group of teenage boys playing soccer and teaching each other how to say “goal” and “ball” in Hebrew and Arabic without any staff to lead them, and when the girls begged me for a “girls night” so that they could get to know each other over hair-braiding and friendship bracelet-making, and when a lunch table full of 13-year-olds called me over to show that they found themselves sitting Jewish, Christian, Muslim, Jewish, Christian, Muslim just by chance…

In these moments, I realize we’re onto something big.

In graduate school, I learned about how to craft a mission and vision statement. Our mission in Kids4Peace is to embody a culture of peace and empower a movement for change. It may sound overly ambitious, but we’re actually doing it.

Our Culture of Peace is growing. Our youth are growing up together — in each others homes, learning about each others realities, with supportive parents going through a parallel process, and with older youth role models there to guide them and hold their hands when it gets hard (and it does get hard).

Our Movement for Change is real. We are thousands strong, blasting a ripple effect out into the world as we march the streets of Jerusalem, travel the world to speak with the masses, challenge local and international leaders in formal and informal meetings, and speak to millions — literally millions –via international television, visiting tour groups, social media, and Jewish-American summer camps and schools just like the ones I grew up in.

For me, bringing in Tisha B’av tonight in Jerusalem, the word Zion means home and it also means hope. Just as the Rastafarians use “Zion” to refer to a peaceful utopia, Zion for me is the peaceful, utopian dream that I long for, and work tirelessly for every day here in Jerusalem. In Kids4Peace, I’m pouring my guts out to make peace with my Palestinian neighbors, colleagues, and friends, so that we may raise our children peacefully in this homeland that we share. I am doing this because I believe with all my heart that the G-d we serve wants us to live in our homeland safely and peacefully with our neighbors.

Meredith Rothbart is the Israeli co-director for Kids4Peace Jerusalem.

About the Author
Meredith Rothbart is the Israeli Co-Director for Kids4Peace Jerusalem. She holds an MA in Community Development from Hebrew University and a BA in Politics, Philosophy and Economics from University of Pittsburgh. She has worked previously with the Israeli Ministry of Defense, International Government Agencies, NGOs in the US, Israel and the Palestinian Authority including projects at the grassroots level as well as national and international initiatives. Meredith grew up in Pennsylvania where she attended an Orthodox Jewish day school and participated extensively in Reform Jewish youth movement and summer camp. Meredith now lives in Talpiyot with her husband and two children.
Related Topics
Related Posts
Comments