The Blogs
Jerold S. Auerbach
Apply for a Blog
Advertisement
Please note that the posts on The Blogs are contributed by third parties. The opinions, facts and any media content in them are presented solely by the authors, and neither The Times of Israel nor its partners assume any responsibility for them. Please contact us in case of abuse. In case of abuse,
Report this post. 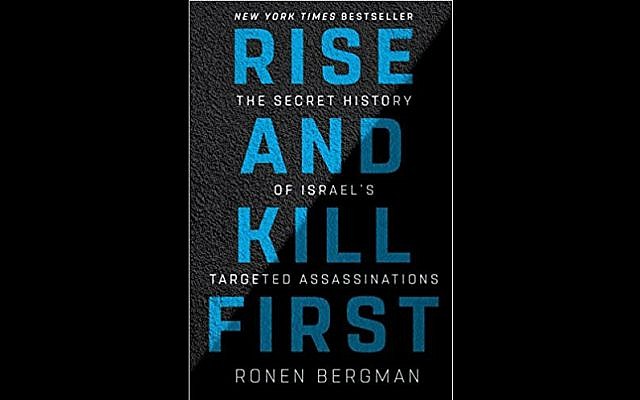 A reviewer with the credentials of Kenneth M. Pollack — who worked for the Central Intelligence Agency, the National Security Council and the Saban Center for Middle East Policy at the Bookings Institution — might be expected to write a thoughtful analysis of a book about Israel’s targeted assassinations, written by respected Yedioth Ahronoth journalist Ronen Bergman. Instead, in the guise of a book review, Pollack contributed a polemic that won the stamp of approval (and prominent coverage) from The New York Times (March 11).

To be fair, in his opening sentence Pollack writes: “One of the very first things I was taught when I joined the C.I.A. was that we do not conduct assassinations.” Noting Israel’s “endless war against terrorism,” he fixes its location “just a bit farther down this slippery slope than the United States” — “careening ahead of us” and worthy of study to discover “where the bumps are along the way.”

Praising Bergman’s best-selling new book as “smart, thoughtful and balanced,” Pollack recognizes that “targeted killing can be a highly effective tactic to neutralize terrorist cells and . . . cripple terror groups.” But he moves quickly past approval of Bergman to criticism of Israel for not recognizing (as Pollack does) that terrorism “cannot defeat the broader movements that breed and feed the terrorist groups.”

Israel, Pollack writes, “has a big problem here.” Its targeted killings and security barriers “can suppress terror attacks” (no small benefit). “But it is not at all clear that Israel can ever win the hearts and minds of the Palestinians” — as though that is Israel’s responsibility. The reason for its failure, Pollack claims, utilizing the standard cliché for criticism of the Jewish state, is “the Israeli occupation.”

Pollack is so enamored of his recipe for peace now that he (preposterously) claims: “Israel so far has not tried the one thing that could address the underlying grievances that give life to its terrorist enemies, trading land for peace.” Can someone with Pollack’s credentials really believe, no less assert, that Israel has not repeatedly tried to do exactly that? Has he forgotten the Oslo Accords (1993), which provided for withdrawal of Israeli military forces from parts of the West Bank and Gaza, with self-governing authority granted to the Palestinian Authority ruled by Yasser Arafat? That experiment of land for peace disintegrated with the outbreak of the Second Intifada in 2000.

Israel tried again five years later. Under Prime Minister Ariel Sharon’s leadership, 8,000 Jewish residents were evacuated from Gaza and Israeli military forces were withdrawn. (Four northern West Bank settlements were also evacuated.) Palestinians had all the land of Gaza, but Hamas rule assured that there would be no peace for Israel.

Pollack’s major complaint about Israel is its failure to adopt “the core strategic approach of COIN” (counter-insurgency): “to suppress the groups’ military operations while addressing the underlying grievances that inspire the movement behind them.” But in the West Bank and Gaza, Israel has been there and done that. The result: waves of Palestinian terrorist attacks in the West Bank and persistent Hamas rocket assaults from Gaza.

Israel, Pollack nonetheless claims, “cannot or will not” employ his preferred strategy. Its preference for targeted killings “consigns Israel to endless repression, endless assassinations, endless criticism” — especially from those like Pollack whose preference for theories of conflict resolution blinds them to realities on the ground.

Targeted killing, Pollack concludes, “feels almost like a drug that Israel uses to treat the worst symptom (terrorism) of a terrible disease (Palestinian anger).” It may be “very effective” (no small benefit), “but it treats only the symptom and so offers no cure.” His polemic ends with ostensible concern that “we are all becoming targeted-killing junkies, . . . unwilling to treat the disease that got us hooked in the first place.”

But with Doctor Pollack prescribing remedies, Israeli leaders would be well advised to continue to respond to realities on the ground, not theories floating in the minds of resident scholars, even — or especially — those who once vigorously urged the American invasion of Iraq.

Jerold S. Auerbach is author of Print to Fit: The New York Times, Zionism and Israel (1896-2016), to be published this summer.

About the Author
Jerold S. Auerbach is author of Hebron Jews: Memory and Conflict in the Land of Israel (2009). His new book, Print to Fit: The New York Times, Zionism and Israel 1896-2016, will be published in February by Academic Studies Press.
Related Topics
Related Posts
Jerold S. Auerbach
Comments