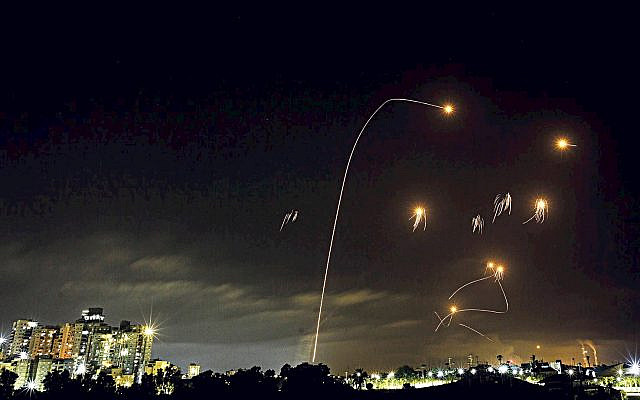 A long exposure picture shows iron dome anti-missile system fires interception missiles as rockets fired from the Gaza Strip to Israel, as it seen from the southern Israeli city of Ashkelon, May 10, 2021. Photo by Edi Israel/Flash90 - via Jewish News

It was inevitable. But no less disgusting, even though we were expecting it: the keyboard warriors, out in force as soon as the first protests hit the streets of Jerusalem, casually and righteously assigning blame.

There was one person who simply posted a picture of the Nazi leader with the line “Dear Hitler, we miss you” – a peculiar message from those who apparently believe all Israelis are Nazis anyway. Another Hitler admirer repeated the hateful mantra that he had kept some Jews alive in order to show why all Jews deserved to be killed.

There was a man who opined: “My local supermarket stocks a bigger ‘arsenal’ of firepower every year around bonfire night. These tiny flares amount to almost nothing. Calling it an ‘arsenal’ is misleading.”

There was a woman who carefully explained to her girlfriend that “Israel” – in inverted commas – was not actually  a country but a colonial setter enterprise, stolen from the Palestinians.

And, of course, the glamorous celebrity sisters Gigi and Bella Hadid weighed in with their nugget of wisdom: “Politicians stutter neutral words in fear of being reprimanded, while the world remains silent to avoid offending the wrong people.” Guess what, Gigi and Bella? I’m one of the “wrong” people.

I have spent the past few days glued to the news and feeling sick. Some of the reports are so simplistic they are laughable: it’s a numbers game, they would have us believe, and so if the Palestinians mourn 24 dead and the Israelis “only” six, well, that just shows Israel’s military supremacy, apparently.

It’s not a numbers game, of course. It’s not any kind of game, as the Arab-Israeli family in Lod, mourning the deaths of a father and his teenage daughter, killed by a Hamas rocket, would be the first to let us know.

There are those, regrettably, who are making political capital out of this torrid situation. Who does it help, for example, to show pictures of damaged Torah scrolls in a burnt synagogue, and insinuate that this happened in a “pogrom” perpetrated by local Arabs? In fact, that particular picture dates from two years ago, but its publication upholds the truth of the old journalistic mantra – “never spoil a good story for the sake of a few facts”.

It has not been edifying to see videos of hundreds of chanting young Jewish men (it’s always men, isn’t it?) in front of the Kotel, bellowing a song at the tops of their voices on Jerusalem Day. And what is that song? It is a Kahanist “revenge” favourite, whose lyrics, from the biblical story of Samson, include the words: “O God, that I may be at once avenged of the Philistines for my two eyes”. The unlovely spectacle has been characterised as “fascism with  a Charedi twist”.

Just two weeks ago –particularly in the north of Israel – there was an outpouring of warmth and support and good neighbourliness between local Arab-Israeli residents and the devastated survivors of the Mount Meron tragedy, with offers of shelter, food and drink. Today, towns and cities with a mixed Arab and Jewish population burn like war zones, with Lod declared to be in a state of emergency and Akko set ablaze.

We all need to dial down the temperature and recognise the long and malign hand of Iran and its proxy, Hamas.

I want the loathsome keyboard warriors, with their talk of Hitler, to shut up – and, above all, I want the killing to stop.