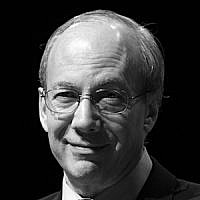 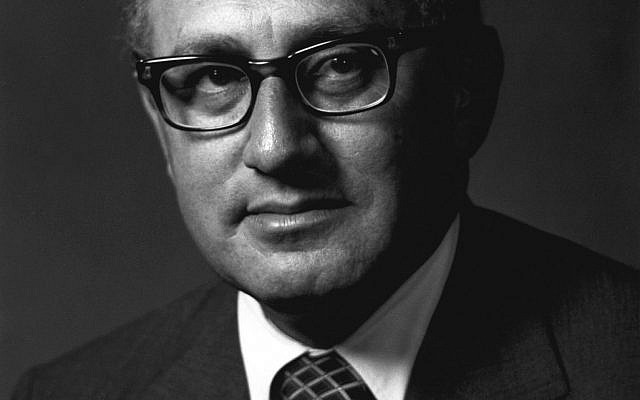 Is there a Jewish take on Henry Kissinger?  There should be.  There is no issue of American foreign policy, including the challenges faced by the state of Israel and the dangers posed by Iran, that is not influenced by Kissinger’s thinking.

The literature on Kissinger is vast, of course.  His enemies see him as a villain, or even a war criminal. His defenders acknowledge his flaws, but insist that he advanced American interests and provided his country with a coherent and rational approach to foreign affairs.

But now that he is ninety-seven, the loathing of the critics has subsided some, and the more positive take on his diplomatic career has come to dominate public discussion.  Liberals and conservatives alike refer to him as an admired senior statesman.  And the most serious and comprehensive book to be written about him in some time, Barry Gewen’s The Inevitability of Tragedy:  Henry Kissinger and His World, praises and defends Kissinger, and views him as the indispensable man of American foreign policy.

Gewen’s book has just been listed as one of the 100 notable books of 2020 by the New York Times.  It has also garnered many glowing reviews, including a laudatory article by Dennis Ross in the fall issue of the Jewish Review of Books.

But amidst the praise and celebration, some reflection is necessary.

Though Kissinger has multiple accomplishments, he has multiple failures as well, many of earth-shaking proportions.  And those failures should be of special concern to Jews and the Jewish community.  When exploring Kissinger’s world-view, fairness and truth require a far more critical look than what Gewen has given us.

Henry Kissinger, of course, is the leading advocate of realism in American foreign policy.  Following the example of his mentor, Hans Morgenthau, Kissinger has an unromantic, no-nonsense approach to how the world works.

In this view, nation-states, whether democratic or not, are by definition egotistical, pursing their own selfish interests.  They can protect themselves against the inevitable aggression of others by pitting power against power, making alliances as required and prepared to use force when necessary.  If diplomacy fails and force must be used, war is waged to secure essential interests rather than to achieve universal justice or peace.  A war waged to promote interests will be less destructive than one fought for grand, idealistic principles, which are ill-defined and vulnerable to sentiment.

Gewen admires Kissinger for presenting his foreign policy in terms of national interest and balance of power.  He believes that a foreign policy so conceived is likely to be more rational and coherent than one subject to the whims of emotion or to simplistic ideas of American hegemony.  According to Gewen, balance of power, rooted as it is in interest and reason, promises stability in our chaotic world.

Kissinger’s grand success came when China split from the Soviet Union, and Nixon and Kissinger leapt into the breach, exploiting the tension and establishing relations with China.  A new configuration of great powers came into being, avoiding nuclear war and conferring economic benefits on hundreds of millions of people.  The Nixon-Kissinger pursuit of détente with the Soviet Union was also significant; it kept an enemy at a safe distance while avoiding demonization and retaining options for convergence in the future.  Impressive too was Kissinger’s “shuttle diplomacy” between Syria and Israel.

But bizarrely, Gewen does not focus on Kissinger’s most notable achievements but turns instead to other cases, such as Vietnam and Chile, where balance of power diplomacy led to disaster.  And “disaster” is not too strong a word.

Gewen attempts not to be a total apologist for Kissinger and does make reference to his critics.  But the references are made mostly in passing, and what Gewen actually does, in virtually every instance, is offer a stout defense of egregious misjudgments.

On Vietnam, for example, neither Kissinger nor Nixon believed that the war could be won, but were intent on maintaining American “credibility” and negotiating “an honorable end to the war.”  The result?  They kept the war going for 6 more years during which 30,000 American soldiers died.  And the havoc they wreaked in the region was devastating.

Beginning in 1969, the Nixon-Kissinger team instituted “secret” bombing of Cambodia, used as a refuge and staging ground by Viet Cong forces.  The bombing, an extension of a campaign begun earlier in Laos, killed 100,000 Cambodian civilians, ravaged the country, and contributed at least indirectly to the rise of Pol Pot.

Were the 30,000 American deaths justified?  Were the chaos and death rained upon Cambodia worth the terrible cost extracted from the Cambodian people?

Hans Morgenthau, the father of foreign-policy realism, thought otherwise.  He argued that America’s credibility was damaged rather than enhanced by a prolonged conflict with a small, underdeveloped country like Vietnam.  In his mind, America was undermining its superpower status by pursuing the conflict.  And it is hard to argue with this view.  The spectacle of American forces fleeing Saigon as the government of South Vietnam collapsed around them hardly constituted “an honorable end to the war.”

In short, even if one accepts the basic contours of Kissinger’s balance of power politics, his execution of its principles was frequently so deeply flawed as to render them meaningless.  For Morgenthau, the key to realism was defining national interest narrowly and maintaining a firm grasp on what constituted reality.  In Vietnam, Kissinger did neither.  Together with Nixon, he saw a nationalism-fueled regional conflict as a great power competition; he also defined “honor” and “credibility” as vital American interests, when, in the Vietnam context, they were not, and the pursuit of them was almost certain to backfire.

And the result? Morgenthau got it right.  What was left of the Vietnam debacle was a stomach-turning American death count; resentment, division, and unrest at home; and death and disruption in Southeast Asia at a level that can barely be imagined today.

Nonetheless, Gewen offers a strenuous defense of Kissinger and Nixon, insisting that America’s concern with credibility was necessary to maintain its leading role in the international order.  He suggests that in Vietnam after 1969, the United States simply had no good options, and Kissinger sought an exit that would not weaken American credibility.  But the problem with this is that America did have options, including a much quicker exit with a much-reduced death toll.

Gewen is no better when it comes to the other grievous errors of Kissinger’s time in power.  Nixon and Kissinger supported the right-wing coup in Chile against the democratically elected government of Salvador Allende.  Their rationale, endorsed by Gewen, was that Allende would lead Chile to Communism.  But again, they misread reality and were blind to possible consequences. It was far from certain that the Russians were intent on asserting control over Chile, and Gewen says virtually nothing about Augusto Pinochet, who overthrew Allende and whose brutal authoritarian rule enjoyed American backing.

And then there is the terrible tale of Kissinger’s enthusiastic support for Pakistan’s campaign against its Bengali minority in 1971.  No honest account of Kissinger should omit this horror story, and yet Gewen makes do with one brief mention.

Faced with a Bengali uprising, the Pakistanis turned to genocidal slaughter.  When India intervened, Nixon and Kissinger supported the Pakistanis and sent them arms, presumably because of India’s ties to Russia and Pakistan’s role as America’s conduit to China.  As pointed out by John Farrell in his review of Gewen’s book in the New York Times, the Watergate tapes of this period show Kissinger to be utterly unhinged on this issue.   Despite the mass killings and horrendous Bengali casualties, Kissinger was convinced that failure to back Pakistan would wreck the balance of power and end American supremacy forever.

And so, yet again, Kissinger’s “realism” was not realistic at all, and a regional conflict was transmuted into a deadly threat to American interests.  In addition, as had been the case in Southeast Asia, Kissinger showed himself capable of a brutality and indifference to human life that is sickening and tragic.  As Farrell notes in his review, realism is no guarantee against delusion.

Kissinger realized that an idealistic America could not turn its back on morality, and he understood the importance of American values.  He recognized that when a nation defines its national interests, it can, and should, do so in a way that includes moral considerations, such as avoiding war and unnecessary deaths.

Nonetheless, values simply did not play a central role in the policies he implemented.  In other words, understanding values is one thing, and internalizing and believing in them is something else.  Kissinger understood the instrumental importance of morality; Americans would engage with and support foreign policy goals only if they were consistent with American values and ideals.  But the hardheaded realism that he practiced was, much of the time, devoid of any idealism whatever and committed to an idiosyncratic view of American national interest that was both distorted and frighteningly callous and brutal.

And what does all of this have to do with the Jews?

Quite a bit, actually.  We Jews are a tiny and vulnerable people, numbering only 14 million.  In the United States, we are less than 2% of the population.  Even Israel, a regional power in the Middle East, has only 9 million people and is surrounded by a sea of still mostly hostile states.

In shaping the Jewish mindset, our vulnerability cuts both ways.  It makes us tough and realistic, and practical about what is necessary for our survival.  At the same time, prodded by our ancient tradition, we know that justice is a supreme value and that right is distinct from might.  We know too that America remains the primary patron and protector of Jews everywhere, and that the moralistic strand of American foreign policy is a powerful factor in cementing American ties with Israel.

All this being so, we have argued for support for Israel by making the case for its strategic value to the United States.  But more frequently, aware that strategic interests change while moral values do not, we have appealed to our fellow American on moral grounds. Protecting U.S. interests and promoting a balance of power are important, to be sure, but how best to make the case for Jewish rights everywhere, against another Holocaust, and for a strong, proud, and democratic Israel?

And the answer is to make the case for American ideals—for freedom and democracy, and for pluralism, civil discourse, and tolerance.  It is to argue for America as a strong country but also a good country that will back a Jewish state that shares its values.

And that is why Henry Kissinger is far more flawed than Gewen suggests or that his defenders allow.  There is nothing wrong with calling for realism, but it needs to be rooted in a moral sensibility that Kissinger, based on the evidence, simply does not possess.  It needs to balance interests and idealism in a way that Kissinger refused to contemplate.  It needs to reject, emphatically and out of hand, the brutish indifference to the mass death of innocents in which, alas, Henry Kissinger was too often implicated.  For Jews, committed as we are to an ancient and awe-inspiring faith, there can be no other way.