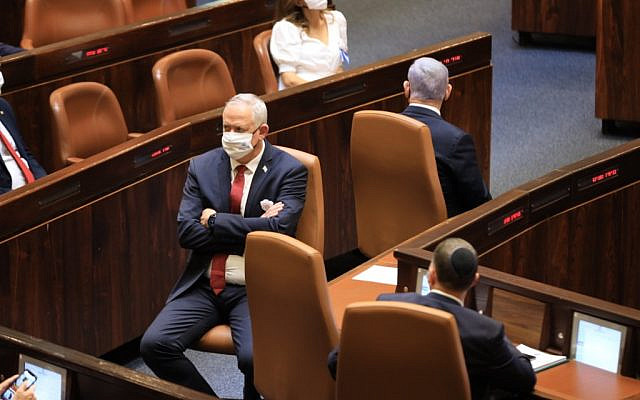 The swearing-in of a new Knesset is usually a festive and exciting event; a celebration of democracy and a joyful occasion for the newly elected Knesset members and their families. I have vivid memories of my own emotions in early 2009, as I made my way into the Knesset building with my daughters, wearing a celebratory ribbon on my lapel.

This week the 24th Knesset was sworn in. Unfortunately, this event carried no sense of celebration, pride, or exhilaration. The lack of any reason to celebrate was symbolized more than anything by the proceedings at the Jerusalem District Court, where a prime minister in office sat on a bench, charged with serious criminal offenses. There is no way to understand the full extent and the seriousness of the current events in Israel’s political system, without relating to their connection to the developments in Netanyahu’s trial. In any other circumstances, if there were no such trial going on, we would not be discussing the possibility of holding a fifth consecutive election. It is impossible to understand the paralysis in government decision-making, the rock-bottom level of public trust in politics and in governing institutions, without fully internalizing the fact that as long as Netanyahu is unable to halt the legal proceedings against him, via the political maneuvers he is busy dealing with out of the Prime Minister’s Office, there will be no end to this crisis.

Netanyahu is fighting to prove his innocence in court, as is his civil and legal right. But it should be clearly understood that, in practice, one cannot serve as prime minister while at the very same time, being a defendant in a criminal trial. The legal question of whether it is permissible to serve as prime minister while under indictment, was seemingly decided by the Supreme Court, which ruled last year that it is permissible for Netanyahu to form a government. But this ruling was not free of concerns and questions, and now, several of these concerns and questions have taken on dire urgency.

First, there are concerns with regard to the blow to public trust in the state and in the legal system, which was a central consideration in the landmark ruling resulting from the Deri-Pinchasi case in the 1990s. This ruling stipulates that when an indictment is issued against a minister, they must cease to serve in that position. This ruling, however, does not apply in the case of a serving prime minister. A survey by IDI’s Viterbi Center at recently found the Israeli public is divided on whether Netanyahu would receive a fair trial (44.5% thought he would, while 43.5% thought he would not). This is a shocking statistic. It points to the success of those who have worked hard to undermine public trust in the fairness of proceedings undertaken by Israel’s law enforcement agencies. The prime minister heads the executive branch of government, and is expected to invest every effort to strengthen the systems under his responsibility. In practice, it is unreasonable to expect an individual who is in a confrontational situation with the system of law enforcement in the morning as a defendant in the courtroom, to then take action to fortify it in the afternoon once returning to the Prime Minister’s Office.

Second, there are concerns that the demands on Netanyahu’s time and attention will not leave him sufficient time and bandwidth to properly fulfill his role as prime minister. The detailed testimony of the first witness, Ilan Yeshua, demonstrated to the entire public, the extent to which the prime minister’s attention, as defendant, must be devoted to what is going on in court. Yeshua’s testimony is scheduled to last three weeks, three days a week. At stake is the prime minister’s innocence and possibly his freedom). Thus, it is unreasonable to expect that he will not devote most of his time to following events in court and to revising his legal strategy accordingly. This is what defendants in other trials do, and this is what will happen here as well, whenever key witnesses are called to testify.

Third, there are concerns with regard to conflicts of interest in decision-making. The Supreme Court has insisted that Netanyahu sign a conflict-of-interest agreement drafted by the attorney general, well aware of the fact that there are areas in which the prime minister’s involvement in decision-making would be unthinkable. In practice, Netanyahu has not signed the agreement, and his activities testify to serious interference in decision-making processes. There is no logical explanation other than Netanyahu’s criminal proceedings for why senior leadership positions in the justice system remain vacant and new officials are not being appointed.

For example, the Ministry of Justice is currently operating without a minister, without a permanent director-general, and without a permanent state attorney, and various deputy positions in the State Attorney’s Office have also not been filled. Thus, the prime minister, in his role as the public official who is ultimately responsible for the justice system, is undermining and eroding this very system. Our data shows that the Israeli public is aware of these attempts, and that as a result a majority (57%) did not believe that Netanyahu’s trial would not open as scheduled. It is also not surprising that the large majority of Israelis (80%) believe that a fifth round of elections will be held in the coming year. The public has little faith that the political system is able to break the deadlock and end the current crisis.

Now is the time for politicians to bestow upon us a pleasant surprise and reach agreements that provide a realistic way out of this crisis. In addition to repairing the economy and leading it back towards growth, the agenda of any incoming government seeking to rebuild public trust and solidarity must include the reform of the electoral system so as make future political deadlocks highly unlikely. In addition, there need to be clear rules on the suspension or termination of service of elected officials who have been indicted, in order to prevent similar crises in the future. Future Knesset swearing-in ceremonies can — and should once again be — events that arouse our emotions and inspire us with a sense of pride.