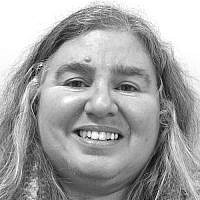 The Blogs
Phyllis Bernstein
Apply for a Blog
Please note that the posts on The Blogs are contributed by third parties. The opinions, facts and any media content in them are presented solely by the authors, and neither The Times of Israel nor its partners assume any responsibility for them. Please contact us in case of abuse. In case of abuse,
Report this post.

Chèvre, Habibi, Friends: As someone involved in Israeli Arab issues of equality and shared society, I wake up every morning hoping that the passage of “Basic Law: Israel as the Nation State of the Jewish People” is just a nightmare. Unfortunately it is real.

At least 20 percent of Israel’s citizens are not Jewish. Jews will enjoy rights that others won’t have. The new law makes non-Jews unequal with Jews. An Israeli basic law is a quasi-constitutional law which amends the Declaration of Independence. It is designed to alter the application of the Basic Law on Human Dignity and Liberty in court rulings, and permits judges to give priority to Israel’s Jewish character in rulings.

How can Israel create a common foundation of mutual respect and goodwill? How can Israel change it’s attitude towards its non-Jewish, minority citizens? For the Arab minority to integrate into a shared society, Israelis must battle against this new basic law.

The passage was received by shock and sorrow by thousands of Israelis and resulted in huge protest rallies and petitions to the High Court of Justice. It formally makes Israel a preferential democracy for Jews only, undermining the Declaration of Independence’s Vision of Israel as a Jewish and Democratic State. It conflicts with the Basic law on Human dignity. It declares that the State of Israel is the state of the Jewish people only and not its minority citizens.

I foresee PM Netanyahu using this new basic law in the upcoming election campaign to appeal to his political base. The timing of this clearly demonstrates his intentions.

Should non-Jews especially those who serve in the army be unequal to Jews? The basic law will affect non-Jewish citizens negatively. In addition the Supreme Court will be use this law in future court decisions.

What does this Nationality Law change? For Israel’s Jews, nothing today. Some critics say it turned de facto racism into de jure racism. The law omits the words democracy and equality. Experts say equality must be anchored alongside other national characteristics of the state, or the law may eventually erode Israel’s democratic character leading to increased violence, discrimination and other serious problems.

By purposely excluding the word EQUAL the ruling coalition weaponized it to be used in fighting against the opposition in the forthcoming elections. Are they blind to the collateral damage and pain inflicted on the Israeli ethnic minorities?

We must judge the Nation-State law by the reactions of the non-Jewish population. It is the reaction of the Druze community in particular, and that of the Arabs and Bedouins, that demonstrated deep emotional feeling of being rejected and/or relegated to second class citizens. Let’s not forget that young Druze joined the nascent IDF during the War of Independence in 1948.

A number of Jewish public figures are speaking against the effects of the bill on the Druze community including former IDF Chief of Staff Gabi Ashkenazi, and former Minister of Defense, Moshe Arens, who lamented “Druze serve alongside Jewish soldiers in all branches of the military; their officers have reached the highest ranks. But one will search the law in vain for any provision for this community.”

Two clauses affect non-Jewish minority groups. First, Arabic was downgraded from an officially recognized language (alongside Hebrew) to “special status.” Last week in Tel Aviv thousands of Arabs and Jews came together to learn Arabic as a protest against the Nationality Law.

Second, Israel will “encourage and promote” Jewish settlement. This could lead to even more discrimination in allocating land and resources despite a severe shortage of housing in Arab society. No new Arab towns have been built since Israel’s establishment except for Bedouin towns in the Negev.

Another section disturbs me. Israel will act “within the Diaspora to strengthen the affinity between the state and members of the Jewish people and preserve the cultural, historical and religious heritage of the Jewish people among Jews in the Diaspora.” What is the definition of Jewish? How will ultra-Orthodox rabbis who control matters in Israel preserve the heritage of Diaspora Jews practicing Conservative and Reform Judaism? Will Ultra-Orthodox Israelis respect Diaspora Jews’ views of religious pluralism? I’m skeptical.

President Rivlin has stated he will protest this law by signing it in Arabic.

The harshest critics have said the law prepares the legal ground for a one-state solution and the annexation of the West Bank and East Jerusalem. It is actually a major step towards the legal seizure of these minority-occupied lands.

On Saturday night, August 4, over 100,000 people protested in Tel Aviv, loudly and clearly for equality. Hundreds of Israeli artists, authors and intellectuals signed a petition calling on PM Benjamin Netanyahu and the Knesset to cancel the nation-state law. The August Peace index prepared by the Israel Democracy Institute found that the majority of the public (60%) think the law should have included equality.

We diaspora Jews who deeply love Israel must speak up. The downgrading of Arabic from an official language leads to downgrading Arab citizens. And what will that lead to? The fact that the Israeli Druze, who loyally serve in the army, feel hurt and betrayed is enough of a reason to abhor this law. No good can be accomplished by this law. For me, Israel will no longer be able to declare itself “the only democracy in the Middle East.” It must be amended or dropped.

A copy of the full text of Basic Law: Israel as the Nation State of the Jewish People is found on the Inter Agency Task Force for Israeli Arab Issues website http://iataskforce.org/sites/default/files/resource/resource-1622.pdf

Phyllis Bernstein lives in Westfield NJ, and is active in Jewish and Arab relations in Israel.