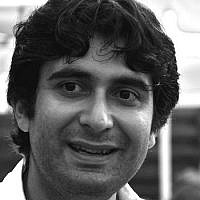 The Blogs
Ramyar Hassani
Apply for a Blog
Advertisement
Please note that the posts on The Blogs are contributed by third parties. The opinions, facts and any media content in them are presented solely by the authors, and neither The Times of Israel nor its partners assume any responsibility for them. Please contact us in case of abuse. In case of abuse,
Report this post.

While the weather is mixed rain and snow with the feeling of freshness and clean air and the smell of Christmas, in the other parts of the world like Kobani the Kurdish city in Syria, the weather is bullet showers and the smell of gunpowder, massacres and savagery of terrorists invasion. Here in west, people are getting ready to celebrate Christmas and new year while refugees of Kobani and Shangal struggling for a little food and clothes if not desperately trapped on mount Sinjar.

Few decades ago Europe had gone through almost the worst catastrophe that humanity experienced ever, the second world war. In those days resistance and massacres were happening all over Europe but some spots and ethnicities were razed and massacred more, like Warsaw and Jews. Kurdistan is much smaller in scale but what happens to the Kurds and especially to a city like Kobani is quiet similar to Warsaw and Jews.

Undoubtedly, if SS –Schutzstaffel– atrocities would have been taking place nowadays, another word to cover their brutalities, war-crimes and viciousness would be terrorism as well. What Hitler did to a city like Warsaw was as same as what ISIL have done to Shangal or Kobani regarding to the sense of cleansing a specific nation but different regarding to the time, place and scale.

ISIL terrorists invaded Kurdistan, killed too many innocent civilians, raped Kurdish women and slavery markets have been erected at any corner of the territories under their control only because of their barbarism and savagery, exactly Hitler style. They even razed villages and planted bomb canisters in the entire towns of where they retreat from.

Unfortunately, like what happened to Warsaw that almost the entire city had to be constructed again from zero as the result of an unwanted heinous invasion, there are some places in Kurdistan which will have the same fate.

About the Author
Ramyar Hassani is a human rights observer and journalist covering the Kurdish struggle from the field and office. He was born in Sanandaj (Sine in Kurdish), in Eastern Kurdistan, the part of Kurdistan that has been attached to Iran.
Related Topics
Related Posts
Comments