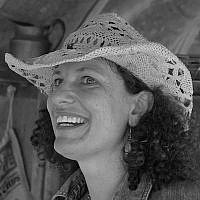 The Blogs
Devora Kimelman-Block
Regenerative Agriculture Educator; Kosher Business Entrepreneur
Apply for a Blog
Advertisement
Please note that the posts on The Blogs are contributed by third parties. The opinions, facts and any media content in them are presented solely by the authors, and neither The Times of Israel nor its partners assume any responsibility for them. Please contact us in case of abuse. In case of abuse,
Report this post.

Before I started KOL Foods, my grassfed, regenerative kosher meat business, I had a vegetarian kitchen for 15 years because I didn’t want to support an industry that was cruel to animals and bad for the environment. Ultimately, however, I realized that meat eaters who keep kosher need access to meat that doesn’t come from factory farms—the source of virtually all meat in kosher grocery store aisles, and even in kosher butcher shops. And so KOL Foods was born.

As a kosher producer, I strive to provide food that is created in the spirit of our tradition. But it is a Herculean task to convince people to buy better when they believe their food already aligns with their values.

Regenerative agriculture harnesses nature’s power and allows it to renew itself. For example, our animals not only take from their environment, but also contribute to it.  By supporting farmers who practice regenerative grazing, folks can honestly feel good about the meat they eat. But companies use all kinds of claims that make it sound like their meat is ethically, sustainably produced, while it’s not. Terms like “natural” and “pasture-raised” mean little, and can hide both unhealthy ingredients and terrible agricultural practices.

Most Jewish Americans believe that a kosher certification guarantees an animal didn’t suffer much during its life, and nearly half believe that animals raised for the kosher market are treated better than non-kosher animals. This has been clearly illustrated by new research from Farm Forward.

In reality, kosher oversight begins at slaughter. Since breeding, raising, and ensuring good treatment are not a part of that equation, kosher animals come from the exact same factory farms that produce non-kosher animals. Kosher companies use “humanewashing” tactics just like non-kosher companies, adding misleading images and claims on their packaging that are meant to attract conscientious consumers.  When new KOL Foods customers learn how most kosher animals are raised, they are angered to be so manipulated, and outraged that despite their best efforts, they have unwittingly supported animal suffering and practices that fall woefully short of their values.

I dream of regenerative agriculture supplying the world with its food — with ranchers working synergistically with nature and animals. Most modern industrial thought defines farming as an extractive process, taking from the Earth until it cannot give anymore. For millennia, however, farming has been used to not only take, but to give back: to enrich soil, maintain the health of the environment, and even absorb carbon from the atmosphere. To many indigenous cultures, this is just normal agriculture. To the rest of us, this is a “new” practice called “regenerative”.

So how can you be a part of regenerating the Earth? What can you do to support an ethical, sustainable food supply?

I am filled with hope for our future. Yes, we need Jewish communal food policies that back up ethical kosher meat production, and yes, we need changes to USDA policies, but there is so much interest in animal welfare and sustainable agriculture that I truly believe that it is just a matter of time before we restructure how food is grown.

Today, conventional (and yes, most kosher) food production contributes to many societal and environmental problems. Communities, companies, and consumers must all work toward the day that food production becomes a key part of the solutions.