Sex is a mitzvah between husband and wife. It is sacred, kodesh. Yet when Esther, the wife of a rabbi and mother of three small children, accidentally witnesses a young married couple having sex in an apartment across from hers, she finds herself aroused by an unfamiliar burst of sexuality.

The novella Her Neighbor’s Pleasure by Shosha Pearl describes the sexual awakening of Esther and how it affects her marriage to her husband, Sholem. Some of her newfound desire will have to wait until the end of her period of niddah, when she and her husband will again be permitted to touch each other, for that is determined by the Halacha to which they both adhere. 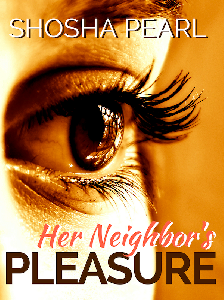 Author Shosha Pearl (a pen name for a woman who has lived in Australia, Israel, the UK and the US) sets her stories in the Orthodox Jewish universe and they range from “mild” to “super smutty” but, she says, “none of them transgress Jewish laws on sexual relationships.” The characters are all religiously observant, with a high regard for family, tradition, and Jewish customs. Along with these kosher lives, the stories place a strong emphasis on what happens behind bedroom doors.

The author previously penned I Will Watch You, four short stories giving readers a voyeuristic peak behind the curtains of kosher love. No matter how explicit her stories may be, the author assures us they still “leave a lot of scope for the imagination.”

In the case of Her Neighbor’s Pleasure, Esther’s accidental voyeurism results in a much stronger relationship with her husband. The book is dedicated to shalom bayit, marital harmony, and perhaps that can be ultimately achieved if it finds both husbands and wives included in its readership.