In my teaching of English language and literature, I discuss with my students six traits of good writing. One of those is voice, which means that when you write, you have to make it personal. People who read what you write have to sense a vibrant, interesting intellect emerging from the words. Otherwise, the prose is forgettable. The same idea holds true in movies as well. Large battle scenes and vast landscapes by themselves do not mean much. It is only when they are the background for a distinctively human struggle do you pay attention to the dialogue. Therein lies the greatness of Spartacus, the movie.

As a young boy, my mother took me to the movies to see Biblical epics like The Ten Commandments and Samson and Delilah. They were fascinating and enjoyable, but none presented me with people to whom I could relate. They were pseudo-history lessons and did not touch my heart. Indeed, movie epics didn’t touch my emotions until I saw Spartacus in 1960. It was a game-changer in my eyes because the hero was someone with whom I could identify, because his wife was beautiful, wise, selfless, and because they both were devoted to a higher and noble cause. Moreover, the people who fought alongside of this rebellious slave against the powerful Romans were normal people from all walks of life. I watched the scenes of combat and I witnessed up close the varied faces of people, young and old, who fought those battles. I cared about their fate. Spartacus’s struggle for freedom against overwhelming odds resonated deep within me.

The story begins in Rome in 73 B.C.E. when Spartacus, a Thracian
slave, is brought from Libya to Italy to join a school of gladiators. It is there that he meets Varinia, also a slave, and they fall in love.

On one fateful day, a Roman general visits the school and for his entertainment requests two gladiators to fight to the death, one of whom is Spartacus. His Ethiopian opponent refuses to kill him and the Roman general kills the black gladiator for this insubordination. Spartacus’s hatred for oppression seethes, and soon after he leads a slave rebellion against their Roman masters. In his campaign against the Roman army, he frees hordes of slaves along the way, who decide to join his army. Spartacus is successful at first, using guerilla tactics to defeat a number 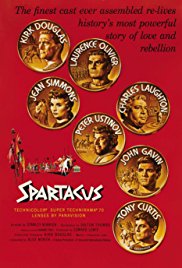 of small Roman armies. But, eventually, Rome decides to make a priority of annihilating the forces of Spartacus. Rome enlists the military might of two legions of Roman soldiers to put down the rebellion and destroy both the man and the legend of Spartacus. In the penultimate battle, Spartacus’s army of slaves consisting of men, women, and children is slaughtered, and the rest are crucified along the Appian Way.

When Spartacus is asked by his comrade shortly before his death if it was worth it, he responds affirmatively. Although he may die, thousands after him will be born free men. He lives and dies in the present, but his idea of freedom for all men transcends generations. Remarkably similar to this is a story told to me by one of my Torah teachers. After the Holocaust when so many Jews perished, he related to me that he saw himself as a messenger transmitting a message for posterity. From the aspect of eternity, his life’s mission is to transmit Torah values to subsequent generations. He is especially cognizant of his responsibilities as a messenger of his father and mother who imbued him with a passion to teach the morality of the Bible. He senses the presence of his parents at all times, and feels charged to perpetuate their memory by teaching Torah wherever and whenever he can.

Spartacus on one level is an exciting narrative of a slave revolt. More important, his story reminds us that potentially we all are messengers and exemplars of noble living that can influence future generations.