Proud of its long and glorious history, rich heritage, and architectural beauties, Kraków was for many centuries the capital of the Polish kingdom. It’s heritage sites, marvel at the most cherished treasures, are endless. Horse drawn carriages in the Main Market Square are a romantic way to explore these sites. 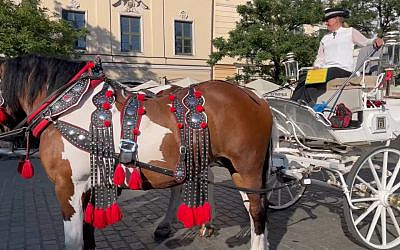 Lined up along the market square, horse-drawn carriage rides are offered (photo by Motti Verses)

The Barbican – a fortified outpost once connected to the city walls, is an impressive historic gateway leading into the Old Town. Faith helped to shape the urban landscape of Kraków and its streets are filled with architectural masterpieces, 1,000 years of craftsmanship and art of amazing churches. 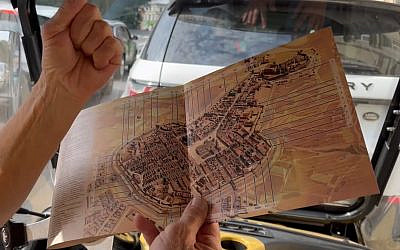 Wawel is a hill upon the Vistula River with a complex of impressive historical monuments. The castle used to be the seat of Polish rulers during the 11th century and is a must visit. 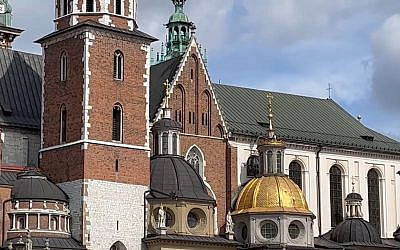 A city that is worth a visit.

As in Israeli a focus on the history of Kraków’s Jewish community is inevitable. My findings are both exhilarating and shocking. Exploring the quarter with a golf cart and a guide is highly recommended. There has been a Jewish community in Kraków for 700 years that lived mainly in the district known as Kazimierz, just outside the old city walls. “Kazimierz is Kraków’s China Town”, our guide Walter says to me, driving a yellow golf cart – a middle aged Professor that worked at the University as a Mathematician. At first it sounded insulting, however on second thought – thinking about it objectively, he was right. No human story can beat what the Jewish community contributes to tourism flowing in this impressive and most recognizable Polish urban brand in the world. 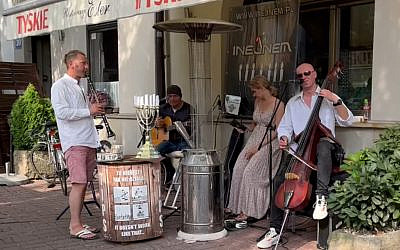 ARIEL ,a famous and historic restaurant and bar presenting a group of klezmers (photo by Motti Verses)

Kazimierz was an independent town from its inception in the 14th century to the early 19th century. It was a place where ethnic Polish and Jewish cultures coexisted and intermingled. The northeastern part of the district was historically Jewish. In 1941, the Jews of Kraków were forcibly relocated by the German occupying Nazi forces into the city ghetto, just across the river. The community did not survive the war. It faced an armageddon, combined with the atrocities commenced in Auschwitz concentration camp, just 70 Kilometers to the west. 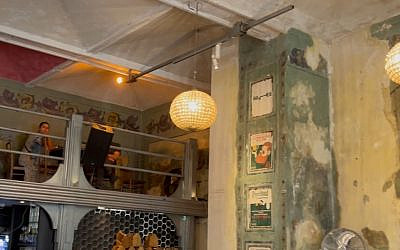 HEVRE Bar & Restaurant, located in a former synagogue with remains of the old paintings on the walls. (photo by Motti Verses)

Today, Kazimierz is one of the major tourist attractions of Kraków and an important center of cultural life of the city. Numerous preserved synagogues together with vibrant bars mix side by side, leading to a peculiar feeling. An Aperol Spritz anyone? How about having it in HEVRE Bar & Restaurant, located in a former synagogue offering food, beer & cocktails in a classy vintage atmosphere. One can still see the remains of the old synagogue paintings on the walls. Peculiar? Some will probably use a different word. How about a pint of beer in ARIEL ,a famous and historic restaurant and bar of this eclectic area, listening to a group of klezmers. The enchanting view of the Szeroka Street oldest synagogues in Poland, provides the necessary inspiration. 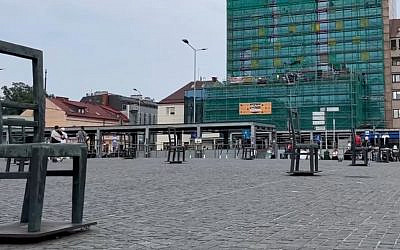 Nothing remained from the old Jewish Ghetto. 65 iron chairs are all set permanently in its former square. Symbolically marking 65,000 Jewish lives that were sent to death camps. Families and little Polish children play there, using the sculptures as in a playground. Apparently life goes on in Kazimierz. Within walking distance the Oskar Schindler’s Enamel Factory –  now a Museum – is packed with visitors. An exhibition “Kraków under Nazi Occupation 1939–1945” will leave the visitor in total shock. Schindler’s Academy award motion picture “Schindler’s List”, reflected his life and his dedication in saving the lives of his Jewish employees. Tourists will not miss a visit there. 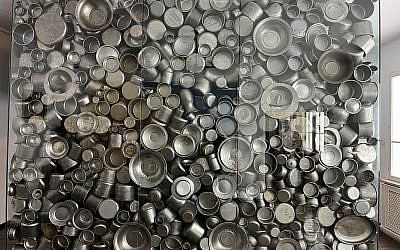 Kraków leaves its Israeli visitors – who do not miss the opportunity to experience it with Ryanair direct flights from Ben Gurion airport – with mixed feelings. A heartwarming experience is to select an Israeli branded hotel as your home away from home in the city. The Leonardo Boutique Old Town is located in a UNESCO-listed building that was completely renovated in 2016. Israeli prominent hotelier David Fattal, founder of the Fattal Hotel Chain, Israel’s largest hotel organization that operates Leonardo Hotels brand, is deeply emotional to promote his brand in Kraków. “I am both excited and happy to open and buy hotels in Europe, especially hotels in cities that have strong connection to our Jewish heritage and the experiences we had to go through in the psst”, he says to me. The Leonardo division operates the hotel as of February. 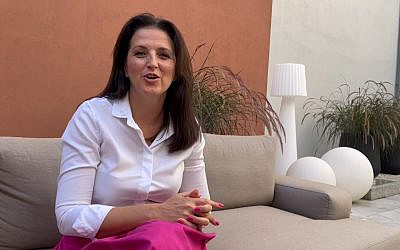 “Our location, within walking distance to Market Square and the old town is a great advantage for visitors,” says Monika Maciag, the hotel’s ever smiling Manager. “The dynamic design of the hotel and the guest rooms will surprise our customers. We offer different comfortable cozy rooms for young people and 2 kinds of apartments. We also have a beautiful new design breakfast restaurant, with delicious Polish breakfast. In the afternoon guests can stay and relax in our Bar and beautiful Patio”.

The moon was glowing for us in the pampering guest room in this enchanting hotel. 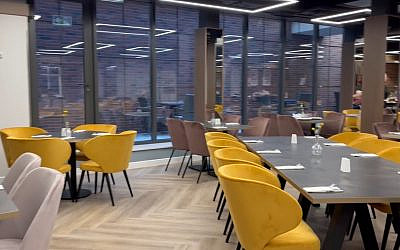 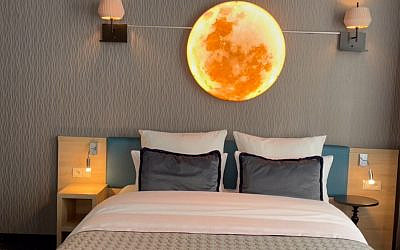 Kraków left us impressed with mixed emotions. This visit surly leaves me with a deeper sense of meaning about my Jewish identity and purpose.