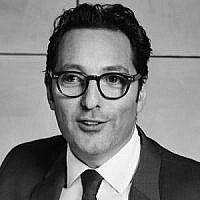 The Blogs
Douglas Krikler
Apply for a Blog
Please note that the posts on The Blogs are contributed by third parties. The opinions, facts and any media content in them are presented solely by the authors, and neither The Times of Israel nor its partners assume any responsibility for them. Please contact us in case of abuse. In case of abuse,
Report this post.

Across the Galilee, a ribbon of new, cutting-edge, educational facilities stands as testament to the vision, determination, generosity and leadership of one man above all: Sir Mick Davis.

From the School of Management at the Western Galilee College, to the Cross-Community High School in Shlomi, to the Medical School in Tzfat, to the Early Years Educational Campus in Merom Hagalil and the new campus at Tel Hai Academic College, the landscape of opportunity for thousands of people in the diverse communities of northern Israel was literally transformed by Mick’s intervention.

Less visible than the physical infrastructure is Mick’s role in making it happen – not least because by his own modest instruction, his name appears nowhere.

As Chairman of UJIA, Mick played the role of strategic philanthropist par excellence, leading by example to inspire and galvanise the generous support of others in our community, and to build partnerships with the Government of Israel and Jewish communities and Foundations around the world – the French/Israeli Rashi Foundation, the American Russell Berrie Foundation and the Canadian United Israel Appeal to name but three – achieving unprecedented leverage for our communal resources. Mick was the archetypal lay leader, empowering me and my professional team to “run the business” whilst providing input, guidance, scrutiny and at times the robust air cover we needed! And all this whilst running a FTSE 100 company and, for much of his tenure, leading the JLC through its growth and development as a key communal agency.

But perhaps the most striking thing about Mick is the integrity which drives him.

Motivated by a fundamental and unswerving belief in the centrality of Israel in Jewish life coupled with a deep personal commitment to Jewish values and a profound intellectual rigour, Mick has never shied away from the challenge of leadership in the broadest sense, consistently doing and saying what he believes is right, even when that has put him personally in the firing line.

Four years ago, Mick stepped down as Chairman of UJIA, to make room for the next generation and was ably and seamlessly succeeded by Bill Benjamin. I hope and trust that, in doing the right thing now by passing on the baton at the JLC, Mick will continue to serve our community as he has done so inspiringly for over a decade, mindful of Rabbi Tarfon’s entreaty that whilst it is not our responsibility to complete the task, nor are we free to desist from it.