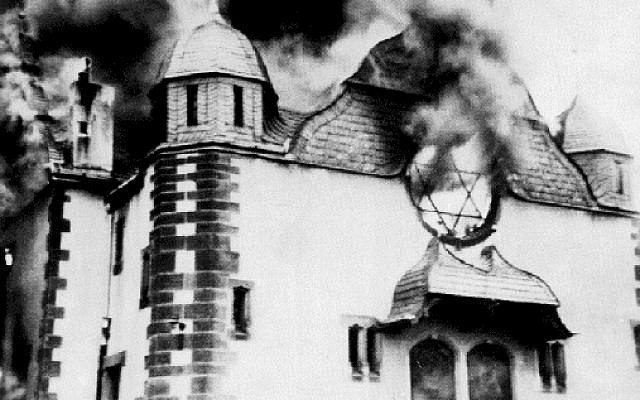 One of the challenges of looking at the Holocaust is the sheer scope of the horror. The numbers, the vastness of the killing machine, the expansiveness of the hate are in many ways beyond human comprehension. That is why personal stories and individual memoirs are so important.

The need to humanize the catastrophe, particularly as most survivors are passing away, is immense.

In that regard, commemorating Kristallnacht, because of its limited scope in time and place, offers a unique perspective on antisemitism, past and present. What happened that night in Germany, 83 years ago — the complete destruction of 76 synagogues, the murder of over 90 Jewish individuals, and the rounding up and arrest of 30,000 German Jews — connects the long history of antisemitism, without which Kristallnacht could never have happened, and the current resurgence of antisemitism that has stunned so many.

It has often been noted that the Holocaust could not have happened without three participants: the perpetrators, the collaborators, and the bystanders. That pattern had already made itself known on Kristallnacht — which translates to “the night of the broken glass.”

The killing of a German foreign ministry official by a young Jew gave the perfect excuse to the Nazi killing machine to go into motion. Nazi police and other officials went from town to town, setting synagogues on fire, attacking Jewish homes and businesses, and rounding up thousands of Jews. There was never any doubt who the instigators were: Nazi government officials. And that’s why the contemporary term for Kristallnacht, used in Germany, is Reichspogromnacht, which means “Night of the State Pogrom.”

But many other Germans joined in. Reports circulated that local Germans in many cities participated in the burning of synagogues. These collaborators were happy to see and join the Nazi government in destroying Jewish houses of worship.

And then there were the bystanders, those Germans who may not have directly participated, but saw the destruction and violence all around them and did nothing to stop what they were witnessing.

The common thread was the deeply embedded antisemitic attitudes that enabled each to play their personal role.

For the perpetrators, conspiracy theories espoused by Hitler and Goebbels about the poisonous Jewish power resonated. The Protocols of the Elders of Zion, which promoted the idea of Jews seeking world domination, had a visceral connection going back generations, which fueled the perpetrators eager response to the call for destruction of Jewish synagogues when it came from Nazi leaders.

For the collaborators, ordinary Germans who may have resented their Jewish neighbors and had longstanding stereotypes about Jews, they accepted the Nazi propaganda that Germany’s defeat during World War I was a result of the Jews stabbing Germany and saw this moment as an opportunity to join the Nazi officials’ pogrom. It was a moment to act out their resentments in a way they never thought possible.

And for the bystanders, those Germans who themselves would never sink to the level of setting on fire a synagogue or attacking a Jew, the generations old stereotypes about Jews — non-loyal Germans, hungry for money, killers of Christ — were enough for them to do nothing while the horrors around them took place in plain sight.

Today’s resurgence of antisemitism bears little resemblance to the extremes and context of Kristallnacht. Yet it too is also characterized by the three levels of participation: It starts with the perpetrators, such as the killer in Pittsburgh, who was motivated by a conspiracy theory about Jewish power. It is also fueled, though perhaps not to the same extreme, by those voices who demonize or exclude all Zionists from any political activities, and who adopt hateful views about the evils and illegitimacy of Jewish self-determination in the land of Israel.

Collaborators are often those who join in to exclude Jews from joining social justice causes because of their Zionist connections or those who support resolutions on college campuses supporting BDS campaigns.

And the bystanders are those who do nothing, either on the right when antisemitic conspiracy theories emerge, or on the left when Jews are targeted for their support of Israel.

Kristallnacht, as opposed to Holocaust Remembrance Day, reminds us of the importance of confronting hate early on. Letting hate fester can move a society from the horrors of a Kristallnacht to the unimaginable catastrophe that is the Holocaust.

We commemorate Kristallnacht not only to show respect to the Jews murdered and imprisoned and the synagogues destroyed that ghastly night, but also to make the point that confronting hate early on remains a vital approach to prevent its spread. That message is particularly relevant today as antisemitism is resurgent.

For all these reasons, let us keep alive the memory of the night of November 9, 1938.