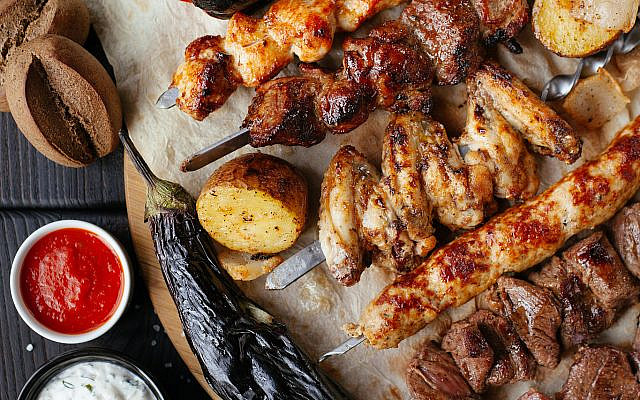 Without hesitation, I told her that I’d like to have my extended family and local friends join me in a kiddush after Shabbat services on my birthday weekend.

And that’s exactly what was done … and it was lovely. My wife, my mom, our two children, and our three grandchildren were all in attendance, along with many Stamford friends we have had for as long as 40 years.

I’m generally not big on birthday or anniversary parties. I never know what to request when someone asks me what I want for a gift. (I told everyone who wanted to give me a gift to make a donation to a favorite Jewish charity.)

But I’ve always enjoyed the kiddush after Shabbat morning services. It’s a chance to catch up and socialize with friends, many of whom I may not have seen for several weeks or months. Some good food and drinks make it even more enjoyable.

When I was a youngster, a shul kiddush was very rare. Maybe a family would make a kiddush for a bar mitzvah or an aufruf, but there was certainly not a kiddush every week as most shuls have now. And the word “hot kiddush” was not in our vocabulary back then. Herring, kichel, and gefilte fish was the typical kiddush fare.

At one of the shuls I attend regularly in Stamford, there are three services on Shabbat … a 7am, 8am, and 9am service. There is a Torah class after the 7am and 8am services. And a kiddush after all three minyanim. We joke that if you attend the 7am minyan, and hang around shul for the morning, you can actually attend two Torah classes and partake in three different kiddushes! Speaking for myself, one kiddush is more than enough, but there are some folks who indeed attend all three.

I was thinking more about the congregation kiddush recently. Once COVID-19 closed our shuls down in March 2020, and many of us began davening at home, the shul kiddush was placed on hiatus. And even after we returned back to the synagogue for Shabbat davening, the kiddush was suspended for several more months. I certainly missed davening at shul b’tzibbur (I lead the services regularly), but truth be told there was actually some pleasure I got davening alone at home in the quiet solitude of our living room. However, what I missed much more was conversing with friends after shul at the weekly kiddush.

Many Orthodox synagogues across the country are struggling with the challenge of getting people back to shul on Shabbat. Some of us have become quite comfortable davening at home, and a lot of folks no longer see the value of attending Shabbat services. Several of the outdoor backyard minyanim that served an important purpose during the COVID outbreak have continued, even though the virus is mostly behind us.

May I humbly suggest that the synagogue kiddush might be a way to attract more people to return back to shul for Shabbat minyanim. And while it may sound crude to use gastrological methods to entice folks back to the synagogue, I will quote you the Talmudic phrase, “Mitoch shelo lishma, ba lishma” – loosely translated to mean that an action which is done for the wrong reasons can eventually become one that is done for the right reasons.

Here are just a few kiddush ideas that shuls can use to entice more people to attend minyanim on Shabbat:

No doubt there are many other ways to encourage individuals and groups to sponsor a shul kiddush. And I’m certain that this will be an incentive for many people who otherwise would be davening at home on Shabbat morning to attend services.

See you all at shul … and at the kiddush that follows!