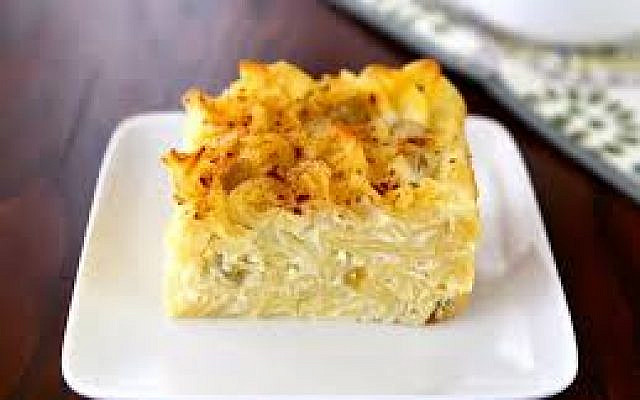 One of the strangest customs in all of Judaism takes place at a Chassidic tisch. The tisch, which usually occurs on Shabbat, is a unique opportunity for chassidim to be in the presence of their rebbe.  Sitting around a large table, they come together to eat, drink, sing niggunim, and hear words of Torah. At a certain point during the meal, the chassidim will silently watch the rebbe eat special foods and then eagerly seek his leftovers. They believe that the rebbe is able to endow the physical act of eating with great holiness and that even his leftover kugel contains substantial sanctity. To the modern viewer this ritual may seem absurd, but it in fact teaches a profound lesson about religious life that is also central to the holiday of Purim.

The natural tendency of human beings is to believe that spirituality can be achieved only by separating from the physical world. Our bodies may need food for sustenance but our souls yearn for something beyond the mortal plane. In the words of Rabbi Joseph Soloveitchik,

homo religiousus starts out in this world and ends up in supernal world… Homo religiousus, dissatisfied, disappointed, and unhappy, craves to rise up from the valley of tears, from concrete reality, and aspires to climb to the mountain of the lord.”[1]

Given this inclination, it is truly strange that the Zohar would equate the holiness of Purim with that of Yom Kippur.[2] Yom Kippur is a day of transcendent spirituality when we abstain from all food and drink and spend most of our time immersed in prayer. Purim, though, is the opposite experience. Other than the reading of the megillah, little time is spent in the synagogue and most of the day is consumed by eating, drinking, and carousing with friends. The Zohar, however, hints that it is exactly through these physical actions on Purim that a powerful connection to God can be forged.

The central innovation of the Baal Shem Tov, the founder of Chassidut, was to teach that there was great holiness in the physical world that could be revealed through engaging in physical activities with the right spiritual intentions.[3] God is to be found not only in torah study, prayer, or the performance of mitzvot. Rather, “the whole world is filled with his glory (Isaiah 6:3).” and even the most mundane behavior can embody profound holiness.

It was the Baal Shem Tov’s greatest student, the Maggid of Mezritch, who applied this unique insight to Purim. He expands upon on the Talmudic statement that “one is required to become inebriated on Purim to the point that one doesn’t know the difference between ‘cursed is Haman’ and ‘blessed is Mordechai’.[4] He writes:

Become drunk with Purim’s love, and then you can lift up everything to God- even the corporeal world, because everything comes from God. This is what it means “until one doesn’t know”: everything is equal before you so that you can serve God even through “cursed is Haman”, which is the physical realm.”[5]

On Purim, one must achieve an expanded consciousness that does not make distinctions between the sacred and the profane such that one can perceive the physical world as being saturated with holiness. For many Chassidic thinkers, this awareness is achieved through the act drinking. Though the traditional explanation is that we drink on Yom Kippur to commemorate the miracle which was achieved through wine at Esther’s various parties, we also know that intoxication can be a powerful spiritual catalyst to perceive holiness where one did not see it before.

While Purim demonstrates the power of revealing holiness in even the coarsest of physical activities, it also demonstrates the real challenges of such an approach. Drinking on Purim is notorious for leading to all sorts of inappropriate behaviors. The blurring of the boundary between the sacred and profane can remove inhibitions necessary for moral behavior or lead spiritual seekers to perceive holiness where there is only narcissism. In many ways, the drinking of wine throughout Jewish ritual presents a perfect example of this dilemma.

Wine is used as a way of demonstrating the human capacity to create holiness. It is incorporated as part of Kiddush on Shabbat, and used in the kiddushin ceremony at a Jewish wedding. However, the Torah also depicts numerous examples in which the intoxicating power of wine leads to great sin. After departing from the ark, Noah plants a vineyard, becomes intoxicated, and is sexually violated by his son Ham. Lot’s daughters use wine to inebriate their father in order to have sexual relations with him. The book of Proverbs repeatedly describes the dangers of wine, “Who has woe? Who has sorrow? Who has quarrels? Who has complaints? Who has needless wounds? Who has bleary eyes? Those who tarry long over wine (Proverbs 23:29-30).”[6] Wine may be a vehicle for holiness, but it also can be a source of immorality. This same ambivalence can be seen in the differing opinions regarding the obligation to drink on Purim., Many halachic authorities argue that one should drink on Purim in order to feel joyous but not to bring about significant impairment.[7]

Nevertheless, Chassidut affirms that though there may be challenges and even dangers with drinking, our task is nevertheless to use it as a path to holiness. According to the Baal Shem Tov, moshiach will not come until the Jewish people internalize this message. This insight can explain a strange Talmudic statement: “All of the books of the prophets and the writings will be nullified in the days of the messiah except for the book of Esther.”[8] Purim represents the model through which we engage the physical world and reveal the Divine holiness and the messianic era can only be brought about by working to transform our physical world into a spiritual one.

A simple yet powerful Chassidic story illustrates the way in which this can take place. During World War Two a Lubavitcher chassid was forced to work as an entertainer at a Nazi encampment. His situation was perhaps better than those in forced labor camps but not by much. After performing for the Nazi officers, he was allowed to take leftover food from the garbage. Under normal circumstances, it is questionable whether one is required to recite a beracha over food that had been thrown away and may not be fit for human consumption. Nevertheless, the Lubavitcher chassid would always carefully recite a beracha before eating and strove to do so with intense spiritual devotion. The reason for this was that he had internalized the fundamental teaching of the Baal Shem Tov. Whether the food was leftovers from the Rebbe’s tisch or leftovers from the Nazis, there still was some measure of holiness within them. Even in the darkest of places, where the physical world feels most distant from God, there is still holiness to be found.

[3] Mevo Shaarim, Piasetzna Rebbe, p. 216 “the innovation of the Baal Shem Tov and his students was the drawing down even into the walls of the vessels themselves until they transformed into light, not that they transformed completely, rather their light was revealed”

[6] The Rambam offers particularly harsh criticism of those who drink to excess (Deot 5:3)

“When the wise man drinks wine, he drinks only enough to accompany (lit., ‘soak’) the food in his innards. Anyone who becomes drunk is a sinner, is disgraced, and loses his wisdom. And if he becomes inebriated before the unlearned, he has desecrated the Divine Name. It is forbidden to drink in the afternoon, even a small amount, except as part of a meal, as drink which accompanies a meal does not intoxicate. [Thus, scholars] are only careful [to refrain] from wine after the meal.”

About the Author
Rabbi Zachary Truboff recently made aliyah and moved with his family to Jerusalem. He is the director of the English speaking program at Bina L'Itim, a project of Yeshivat Siach Yitzchak and an educator for the Hartman Institute. For nearly a decade, he served as the rabbi of Cedar Sinai Syagogue in Cleveland, OH. He is an officer of the International Rabbinic Fellowship. He has a passion for using Jewish texts and ideas along with contemporary thought to address important issues of the day.
Related Topics
Related Posts
Comments