In the aftermath of the Brussels bombing, US and Turkish authorities are currently discussing the role of Syrian Kurds in an effort to seal ISIS supply line through Manbij that lies at the southeastern end of the 61-mile border Turkey shares with Syria.

In return for Turkey’s cooperation, Erdogan demanded Syrian Arab tribes be included in the Manbij operation and discard the Kurdish PYD-led Syrian Democratic Forces, and that US provide air support for Turkey-backed jihadists as well as Turkish soldiers in ground operations.

However, appeasing Turkey means US must give up on the most effective ground forces fighting ISIS, support jihadists that include Al Qaeda/Al Nusra to conquer more Syrian territory, and risk military confrontation with Russia over Syrian air space.

According to Hurriyet writer Verda Ozer who accompanied Erdogan on the US trip, Ankara proposed: “Give up the PYD. Instead we will fight [IS] on the ground with Arab and Turkmen groups we support.”

Nonetheless, this did not sit well with Washington that warned of Russia’s possible reaction if Turkish soldiers took part in the ground operation.

Moreover, it would also antagonize China since Erdogan’s support of Turkmen and Chinese Uyghurs jihadists in the Army of Conquest in Syria is a thorny issue in bilateral relations. 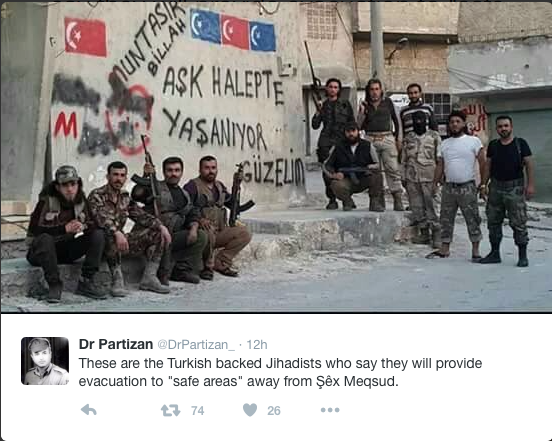 Fehim Tsetekin in Al Monitor noted Turkey’s obstructionist posture towards the anti-ISIS campaign, especially in light of ISIS infiltration of Turkey through the 60-mile border gap, the role of those infiltrators in terror operations in Europe and unto Libya, that made “Ankara’s game-spoiler attitude unbearable.”

Now the world awaits what would be US decision regarding treatment of its Kurdish ally, and whether Washington would abandon them again to appease Erdogan’s demands.

Last year, US betrayal of Iraqi Kurds and accessing Turkey’s Incirlik airbase in return for turning a blind eye to Erdogan’s war on them, has already damaged Washington’s credibility as a trustworthy ally.

Continued support for Erdogan’s ambitions to overthrow the Syrian government and arming Al Qaeda groups during the ceasefire, further sow perception that US is not serious about fighting ISIS.

On April 8 Jeremy Binnie from IHS Jane’s reported Washington continued to ship weapons to Al Qaeda affiliates in Syria during the ceasefire agreement, corroborated by the jiahdi groups themselves that the ceasefire purpose was to break the Russian and Syrian army momentum and buy time to rearm for the next offensive.

Adam Entous from the Wall Street Journal also revealed that Cold War warriors such as Defense Secretary Ash Carter, chairman of Joint Chiefs of Staff Gen. Joseph Dunford, and CIA director John Brennan were not focused on ISIS but rather fixated on “inflicting real pain on the Russians,” and proposed a Plan B to supply Al Qaeda groups with anti-aircraft missiles that also threaten civilian airliners.

Meanwhile ISIS is left to fester and grow, as oil, weapons, and fighters continue to flow through its Turkish supply line. Its continued resilience in turn is attracting additional fighters from the West, including 29 German soldiers.

In 2014, Germany’s Deutsche Welle actually showed a video of clothes, food, and various supplies addressed to Raqqa flowing from Turkey to Syria to support ISIS.

In fact, US inability to fully confront ISIS or cut its supply line over the past two years has fomented Iraqi perception that Washington is secretly supporting ISIS.

On April 7, Military Times reported that in a new internal U.S. government polling, one in three Iraqis thinks the US is supporting ISIS.

On April 12, the Washington Post reported that 90% of Iraqis regard the US as an enemy.

This is not surprising given “our policy has consisted of funneling weapons to Syrian and foreign opponents of the Assad government, some of whom rival our worst enemies in their fanaticism and savagery,” as criticized by former US ambassador to Saudi Arabia Chas Freeman.

Other US officials share his revulsion. Current Virginia state senator Col. Richard Black (ret.) also decried, “how did America — a nation once committed to justice, decency, freedom and liberty — become militarily aligned with this evil Army of Conquest? Why do we follow the Turks and Saudis and their Army of Conquest — an army that seeks to purge the world of Christians, Jews, Shiites, Hindus, Buddhists and Yazidis?”

A former pilot in the US Marine Corp who earned a purple heart, Senator Black admonished the current administration.

“I’ve seen Americans die in battle, and not one shed his blood so that the Army of Conquest could plunder and enslave Syria. No American sacrificed his life so that Syria’s al-Qaida could compel Christians, Druze and Alawites to renounce their religions or die. None shed blood so that children could become concubines, ravaged by savages.”

“This is not what Americans have fought and died for. The U.S. alliance with terrorists betrays Americans who died at their hands on 9/11. Our covert alliance with the Army of Conquest stains the honor of everyone who wears our nation’s uniform.”

Fellow soldier Congresswoman Tulsi Gabbard (D-HI) echoes his concern. A reserve officer in the Army National Guard with two tours in Iraq, she had also highlighted that Turkey and Arab Gulf states supporting Al Qaeda groups that attacked Americans on 9/11 and killed US troops in Iraq and Afghanistan is already unpalatable to the American public. But for the current leadership in the White House to support and arm US enemies, and abuse US taxpayer money to do so, is a betrayal of the American people.

Now as the Pentagon and CIA continue to service Turkey and Gulf states to further their agenda for Syria, it is small wonder the international community is questioning the moral legitimacy and credibility of US leadership.

Moreover, distrust of America as a reliable ally is not contained in the Mideast. In a globalized world, what occurs in the Middle East and elsewhere is watched by the Far East.

Indeed when Russia invaded Crimea, witnessing a meek US response, Tokyo threatened the US that if it behaves the same way towards Japan over the Senkaku Islands, Japan would abrogate the defense treaty, kick US troops out of its bases, and build nuclear weapons.

Sensing the White House is dismissive of various ally’s security concerns and leaving them feeling abandoned, some US pundits are stepping in to help their defense planning.

Arthur Waldron, a highly respected China hand and advisor to the Pentagon, in March 2014 penned an article in Nikkei Asian Review calling for Japan to develop its own military might and nuclear weapons.

Doubting US commitment, and fearing a scenario that “Japan will face, at some point, a conflict with a larger, nuclear capable aggressor, at a time when it has no countervailing power of its own, nor reliable ally,” he exhorted Japan “must use the years ahead to develop an all-around independent military capacity, including the sort of minimal nuclear deterrent that Britain, France and other countries possess.”

Doubts of US commitment also prompted Taiwan to embark on a clandestine nuclear program in the 1970s, when US abandoned Taiwan in 1979 to recognize Beijing, and Taipei suddenly found itself an orphan that is isolated and delegitimized in the international community. However, CIA cultivated a spy in Taiwan’s nuclear weapons program and brought it to a halt, and as Washington increasingly sees China’s absorption of Taiwan as a foregone conclusion, Taipei finds itself with “no countervailing power of its own, nor reliable ally.”

Back in the Mideast, now the Kurds find themselves an orphan that is isolated and delegitimized, with only Russia championing for them to be included in the peace process. Israel has also paid attention to the case of Taiwan, and noted the uncertainty of depending on US as an ally and concern over eventually being “Taiwanized” and delegitimized.

If America again asks Syrian Kurds to sacrifice their lives to fight on behalf of the world against ISIS, then hand them over to be bombed by Turkey as they did with the Iraqi Kurds after saving the Yazidis on Mount Sinjar, Washington should not be surprised if the Kurds and other US allies begin to align with Russia and China and look elsewhere for leadership. Nor should it be surprised if some allies seek the nuclear option, and begin to unravel the global nuclear non-nonproliferation treaty (NPT) regime in a post-American new world order.

An earlier version is published in the Asia Times on April 13, 2016.