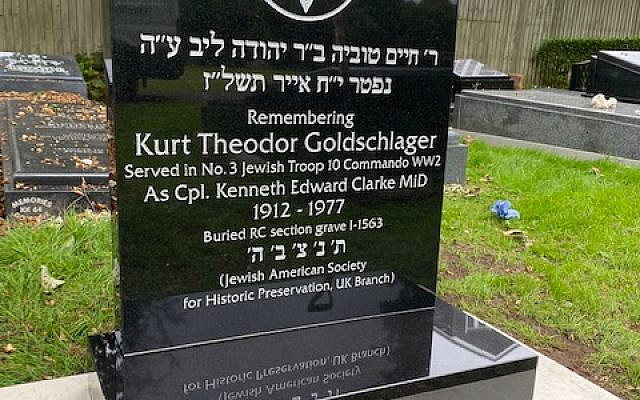 For the first 30 years of his life, he was Kurt Theodor Goldschlager.  He lived in Vienna, even after the Anschluss, the German annexation of Austria. Desperate to get out of the Nazi clutches, using his parents’ help, wealth, and connections, Kurt and his three older siblings escaped to Britain in 1940.  His father, Julius Goldschlager, a famed Viennese architect, never got out. He died in Vienna, November 1940.  His mother Sara was deported to the Izbica Transit Camp, where she was murdered in 1942.

Like tens of thousands of European refugees who fled to Britain, he was viewed with deep suspicion by the British.

Was he a secret Nazi sent to infiltrate and weaken British resolve to fight? Many Brits suspected and feared they might be? Churchill viewed all of them as a risk.  When the War broke out, he ordered all refugee men of military age, especially the German-speaking ones, arrested and interred.  The British did not make a distinction that thousands of the rounded-up men were Jews who detested the Nazis with every fiber of their being.

The refugee Jews, together with the other foreigners, were herded to British internment camps. Some were shipped to Canada and others to Australia under terrible conditions.  The Jews were especially brutalized by both the Nazi sympathizers and anti-Semitic British guards.  Bloody fights ensued between the Jews and the Nazis in the camps. Kurt Goldschlager was among the interned.

October 1940, Britain has survived and won the Battle of Britain.  She was desperate for men.  In the internment camps were a huge reserve of men.  Not sure if they could be trusted, Britain opened Work Labor Companies, under strict controls, to internment volunteers. They were named the Pioneer Corps.  Euphemistically, they were known as the Kings Most Loyal Enemy Aliens.

The refugee Jews, by the thousands, eagerly enlisted at the opportunity to do something to help Britain get at the hated Nazis.

Military planning began focusing on taking the fight to the Germans.  It would be years before a combined Allied Army invaded Europe.  The British began organizing commando attacks across the Channel and into occupied Nazi Europe.  Chief of Combined Operations, Earl Mountbatten, recognized an incredible, highly motivated resource they had inside the Pioneer Corps, Jews.

Secretly, over 350 German and Austrian Jewish refugees volunteered for extremely dangerous Commando services. Closely screened, 86 of the toughest were selected. After they assumed English names and Christian identities, they became 3 Troop (10a) – Inter-Allied Commando.  They were sent to Aberdyfi, Wales for very, rigorous training.

They were a major secret weapon of British operations and proved themselves over and over in fighting theaters all over Europe.  Other Inter-Allied Commando units were designated by their country of origin such as #2 Troop, the Dutch Troop, but not #3 Troop.  Churchill was skeptical of their abilities.  He named them X-Troop.

The British feared having this extraordinary resource of Jewish fierce anti-Nazi Commandos fight as a single unit.  A single military tragedy could wipe out the entire Troop.

Instead, they were operationally spread out in twos and threes among many fighting units.  In almost every action, they were the point of the spear into the Nazi hearts.  X-Troopers landed in Normandy well ahead of D-Day.  They proved crucial in the success of the landings and numerous other fights.

Kurt Theodor Goldschlager became Kenneth Theodor Clarke.  He was assigned to a Dutch unit.  After fighting his way across Europe, he was attached to X-Troop as the official fighting ended. His job was to hunt and capture Nazis. He, and all X-Troopers, could ferret them out very well.

Clarke was Goldschlager no longer. He, like most of the X-Troopers, retained their non-Jewish names after they were discharged. Clarke obtained British Citizenship in 1947.  He kept a link to his secret past.  He liked to use his nickname, Teddy.

Clarke earned a bevy of medals including the MiD.  Clarke was Mentioned in Dispatch (MiD) for extreme bravery when under heavy fire he saved many of his Dutch unit.

1999, a memorial, a large slate vertical rough-cut stone, was placed in Penhelyg Park, Aberdyfi, overlooking the sea for 3 Troop (10a).  An honorary text was engraved on the stone in all capital letters.

“FOR THE MEMBERS OF

WHO WERE WARMLY WELCOMED

WHILE TRAINING FOR SPECIAL DUTIES

TWENTY WERE KILLED IN ACTION”

Two interpretive markers were added near the seawall, one in Welsh and one in English.

“This British Army Commando Troop initially consisted of eighty-six German-speaking refugees from Nazi oppression who were given fictitious names and identities as British nationals for their own protection and effectiveness.  Commanded by Major Hilton-Jones MC, their special duties were reconnaissance, interrogation, and intelligence.  Deployed singly or in small groups, they rendered distinguished service in the defeat of Hitler’s Germany.”

One key distinguishing word recognizing the uniqueness of X-Troop was glaringly left out – Jewish.

The official British War records did not identify the men as Jews.  A majority of the surviving veterans of X-Troop also did not want the word Jew, or Jewish added.  They were uncomfortable with the identifier.

For over ten years, Martin Sugarman, the archivist for the Association of (British) Jewish Ex-Servicemen, and Women has been actively petitioning Aberdyfi to add a small memorial plaque at the Penhelyg Park Memorial site.  His request is modest and historically correct to identify 3 Troop (10a) as Jewish.

Aberdyfi has repeatedly refused. They even refused to add information to their visitor travel center brochure about the Memorial identifying 3 Troop (10a) as Jewish.

Among all the Allied Armies who fought in WWII, X-Troop was the only unit of refugee Jews organized specifically because they were Jews.

~1,500,000 Jews fought in WWII.  About 500,000 were American Jews.  Approximately 1,000,000 were Russian Jews with smaller contingencies of Jews integrated into regular military units from other countries.

The famed Jewish Brigade Group was not formed until 1944, long after X-Troop.  They were homogeneous, Yishuv volunteers, part of the newly created Palestine Regiment.  The British wanted the Palestine Regiment to be 50% Palestinian Jews and 50% Palestinian Arabs. The Palestinian Arabs tended to desert once they had received their enlistment bounties. They were largely unreliable for British operations being unable to maintain their brigade strength.  The Jewish Brigade Groups were very effective.

Kenneth Edward Clarke (Kurt Goldschlager) returned to British civilian life.  He never married.  He attempted a series of businesses that failed.  His life became murkier, even murkier than the reputed British criminal associates he became entangled with.

July 1977, Clarke was murdered in an apparent “gangland incident.”  He was found on a Manchester Street.  His skull had been crushed.

Clarke was indigent.  No one claimed his body. Not knowing he was Jewish; the city buried his remains in an unmarked grave in the Roman Catholic Cemetery.

Martin Sugarman uncovered his tragic story.  He approached the Jewish American Society for Historic Preservation (JASHP). Sugarman is the head of JASHP’s British affiliate. He asked if we would fund a memorial stone for Goldschlager.

Though the Parish was agreeable, local law prohibits adding a stone on Goldschlager’s gravesite with anything more than his name and death date drawn from public records.  A stone is being organized for where his remains are.

JASHP further agreed to fund a proper memorial stone for Goldschlager in the Manchester Jewish Cemetery.  It was placed, September 2, 2021, with special assistance from Joe Flacks of Manchester.

The text of the Jewish Cemetery stone reads, under a large Jewish Star,

his name in Hebrew and:

Served in No. 3 Jewish Troop 10 Commando during WW2

The Goldschlager memorial is sited over an empty grave. He is forgotten no longer.

The simple, dignified burial stone is the only memorial in the world recognizing 3 Troop (10a), X-Troop, as having been the “Jewish Troop.”

Jerry Klinger is the president of the Jewish American Society for Historic Preservation.