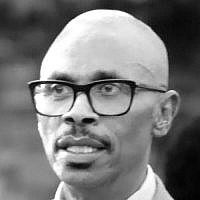 The Blogs
Gatsinzi Basaninyenzi
Apply for a Blog
Advertisement
Please note that the posts on The Blogs are contributed by third parties. The opinions, facts and any media content in them are presented solely by the authors, and neither The Times of Israel nor its partners assume any responsibility for them. Please contact us in case of abuse. In case of abuse,
Report this post.

The first time I cried listening to a genocide survivor was on July 10, 2008. I was then attending a seminar on teaching about the Holocaust at The Olga Lengyel Institute for Holocaust Studies and Human Rights (TOLI) in New York City. Gisela Glaser, a Holocaust survivor, was sharing her story of surviving Auschwitz and other concentration and extermination camps in Poland. An anecdote from her testimony that tested my stoicism was when she talked about her desperate need to hydrate. A friend of hers, also a concentration camp inmate, urinated in a container and handed it to her to drink. There is a saying in Kinyarwanda, my mother tongue, that goes, “Amarira y’umugabo atemba ajya munda,” which translates to “a man’s tears flow into his belly.” That day, the proverbial tears did not flow into my belly; they ran down my cheeks, to my embarrassment. I had been programmed by patriarchy to hold back tears, even in the saddest of moments. During the ensuing years, I was able to listen to genocide survivors’ testimonies without crying. That was to change on May 28, 2022.

I was in Salt Lake City, Utah, where I had been invited to speak at the 28th commemoration of the 1994 genocide against the Tutsi in Rwanda. The three-day event from May 27 to May 29, dubbed Kwibuka28, was also the first reunion of the genocide’s survivors residing in the United States. (Kwibuka is Kinyarwanda for remember or remembrance.) Daphine Batamuriza, perhaps the youngest of the survivors who had gathered, shared a story that was wrenchingly sad, but one with a good ending. She was only 2 years old when the genocide took place, so her story was not from recollections; it had been recounted to her by her older sister, who during the genocide was in her early teens. Throughout the ordeal, the sister carried her on her back as she sought hiding places from killers. An episode from Daphine’s story made many of us in the audience cry. She said, “We had gone several days without food and no water. So, when she tried to wake me up, I wasn’t waking up, so she thought I was dead. She went ahead and placed me under a tree and left. She said her goodbyes thinking I was dead. And, after several hours of wandering and thinking the only family member she had left died, and [she] had not given her a proper burial, she came back and found me eating dirt. I hadn’t died yet.  She placed me back on her back and we kept on trying to survive the genocide.” Throughout the sharing, Daphine was sniffling, as were most of us in the audience. This time, though, crying did not make me feel embarrassed or ashamed. Emotions of empathy, I thought, are human. My emotions were a mix of anger and joy – anger for those who, if found, would have killed the 2-year old Daphine simply because she was Tutsi, and joy that she was alive and serving in the US Air Force.

Pondering on the episode, thoughts began to race in my mind like a stream of consciousness, wandering to almost everything about the genocide against the Tutsi. When they settled on the genocide’s denial, I instantly understood what the late Elie Wiesel, one of the most famous survivors of the Holocaust, meant when he said that genocide denial is a form of a “double killing” of genocide victims. I thought of two American academics – Allan Stam and Christian Davenport, authors of an essay titled “What Really Happened in Rwanda.” In 1998 and 1999, they went to Rwanda several times to conduct research on the 1994 genocidal killings that began on April 7 and were ended on July 4 by RPA troops. “We wanted to discover what had happened there during the 100 days in 1994,” they wrote. Did they, in their investigations, talk and listen to survivors of the genocide against the Tutsi? How would the academics and their like have felt had they been in that hotel hall in Salt Lake City listening to Daphine’s and other genocide survivors’ stories? Would they have regretted having written that “many of the killings [during the 100 days] were spontaneous” and that Hutus and Tutsis played “the roles of both attackers and victims”? Perhaps – if they did not disengage from listening – for listening to genocide survival stories has such power to evoke empathy. Noel Gasore’s story, like Daphine’s, had such power.

Wiping tears from his eyes, Noel, garbed in military fatigues, implored in Kinyarwanda, “Mutugire abana banyu.” He was appealing to some of us in the audience to adopt, not in a legal sense, young genocide survivors like him. Daphine, who was seated at a table next to mine, had earlier gestured that I hand her a Kleenex tissue to wipe her tears. I handed her the whole box, certain that I would not need it. I was wrong! When Noel made the imploration, I was assailed with guilt! “What is the use of empathy if it does not lead to action?” I thought.  Seemingly, I was not alone in feeling the kind of guilt I was experiencing. When Yehoyada Mbangukira, president of the United States Rwandan Community Abroad (USRCA), took to the podium to give his remarks, he departed from his prepared script. He said, “When I set out to come to this event, I thought I was here to just observe and then share something and then go home. Instead, what I found here is encouragement to me and a challenge to me that I have been slacking. I have not done all I can do…. The survivors’ stories have informed me in ways that if I leave this place and do what I used to do, which is nothing to this cause, shame on me!”

Indeed, Yehohada spoke for me and probably for many others in that hotel hall. Until that Kwibuka28 event in Utah, empathy for me had just been an emotion word. The survivors’ stories added another dimension to the word’s shades of meaning: Empathy became both an emotion word and an action word. Another important lesson I learned during that three-day event is that for empathy to lead to action, one must learn to listen to genocide survivors’ stories. In his remarks closing the event, Egide Nkuranga, president of the Ibuka association in Rwanda, began by quoting the late Naasson Munyandamutsa, a psychiatrist who said in French, “Il n’y a pas d’outils pour mesurer la souffrance des rescapés. Pour les comprendre, il faut s’entrainer à les écouter patiemment et essayer de décoder le langage de leur souffrance.” Egide translated the quotation into Kinyarwanda, which in English translates as follows: “There are no instruments to measure the suffering of genocide survivors. To understand them, one must train himself or herself to patiently listen to them and to decode the language of their suffering.” Patiently listening to many genocide survivor’s stories during that Kwibuka28 event led me to three conclusions: that each survivor’s story is unique, that the survivor community is diverse, and that its needs are multifaceted.

I had gone to Utah to speak; I left Utah having been educated about what it means to be empathetic.

About the Author
I hold a Ph.D. in English from the University of Iowa in the USA. For the last twenty years, I have been teaching literature at Alabama A&M University in the USA. Twice, I have been on a study tour of Israel's historical sites, first with Echoes and Reflections and later with the Olga Lengyel Institute for Holocaust Studies and Human Rights.
Related Topics
Related Posts