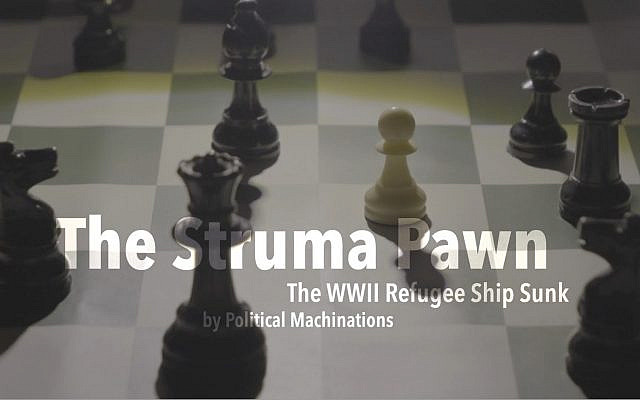 I reached out to Aaron after meeting him online because he sounded very interesting – especially that he was relocating his family from Istanbul to Los Angeles. That initial connection led to his volunteering to direct on Zoom the acting students of long-time LA casting director/acting coach Stephen Snyder for a pro bono Zoom recording of my nonfiction Holocaust theater project www.ThinEdgeOfTheWedge.com

In the course of this Zoom collaboration, Aaron told me about the saga of the WWII refugee ship Struma sunk in the Black Sea with almost 800 Jewish men, women and children. The devastating account especially interested Aaron because the ship’s passengers were held captive onboard in the harbor of Istanbul for 70 days.

Then I read about Steven Spielberg’s new Jewish Story Partners documentary grant program. With only a few weeks until the next deadline, Aaron and I decided to sprint to the finish line (with considerable assistance from film editor Serhat Cenk Yalin).

We started with Aaron getting a small crew to film him at Sarayburnu port on the European side of Istanbul. This is the location where the Turkish authorities forced the Struma passengers to remain onboard with no communication allowed with the outside world and in unsanitary conditions. (One historian told Aaron that there were so few toilets the refugees had to “do their business” on the deck; the passengers had a clean-up squad to deal with the mess.)

While still in Istanbul Aaron conducted interviews with these three people:

a) Metin Delevi, board member of the Jewish Museum in Istanbul and advisor to the Turkish Chief Rabbinate;

b) Bahar Feyzan, Turkish newscaster and author of the book SHIP OF HOPE, first published in 2014;

c) Aaron Nommaz, author of the book STRUMA published in 2019.

Then Aaron, Serhat and I worked on putting together 15 minutes of film footage to submit with our application, and you can watch the footage at https://vimeo.com/569539114

While we have not yet heard from Jewish Story Partners, Aaron and I plan to pursue producing a full-length documentary. The account of the Struma is that of how one ship was used as a pawn from December 1941 to February 1942 in the political machinations of the Turks (Turkey remaining neutral in WWII), the Nazis (now occupying the border with Turkey), the British (who wanted to appease the Arabs), the Nazi-allied Romanians (the ship sailed from Romania), the Russians (who torpedoed and sank the ship), and to some extent the Americans.

Although there are discrepancies in the historical record that Aaron and I hope to answer in our proposed full-length documentary, I have started writing a serialized version of this political maneuvering on the new Amazon format Kindle Vella – www.amazon.com/kindle-vella/product/B0991SBMZR

The little-known historical account of the Struma and its passengers is important to preserve for both Holocaust history and for remembering the passengers who did try to save their own lives – even when they knowingly boarded a rickety old ship that had little hope of running the British blockade of illegal immigration to the land of Israel.