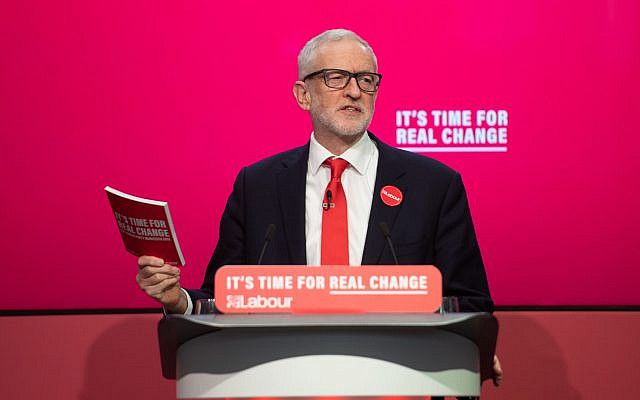 Labour’s Election Manifesto doesn’t have all the extreme policies about Israel passed at its September conference, but the text nonetheless contains all the material required for a complete reversal of current UK-Israel relations and a pivot towards anti-Israel policies that Jeremy Corbyn has personally advocated for decades.

One new policy in the manifesto and passed at conference is to “Immediately suspend the sale of arms…  to Israel for arms used in violation of the human rights of Palestinian civilians”. This will give  ministers a lot of scope to define which military and security equipment falls foul of this definition and which is legitimately used by Israel to deal with terrorist threats. The net result will probably be that the IDF doesn’t bother trying to buy British kit, whatever the purpose, as the risk of the export licence being refused makes it too much hassle. Singling out only two countries for an immediate restriction on arms sales – Saudi Arabia and Israel – signals that Corbyn views them as both morally comparable to each other and morally worse than all other countries.

Whilst reiterating Labour’s support for a two state solution, the manifesto says the conflict “must be settled on the basis of justice and international law”. Does this mean international law trumps pragmatic negotiated political deals? For instance, land swaps to deal with the settlements issue is not consistent with the international legal consensus on legality of the settlements but has been a feature of every credible peace proposal. The implicit risk here of the focus on international law, rather than political compromise, is of a Labour government pursuing “lawfare” measures against Israel through the UN and other international organisations such as the European Court of Justice and the International Criminal Court.

The manifesto demands “an immediate return to meaningful negotiations leading to a diplomatic resolution.” But what if that doesn’t “immediately” happen?  It’s not very realistic to think it would, given the contrasting agenda of the current US administration. Is there then some kind of sanction that would be imposed by the UK against Israel for not complying?

As in 2015 and 2017, it says “A Labour government will immediately recognise the state of Palestine.” Thus, irrespective of whether there is a negotiated deal, or indeed they agree to start negotiations, the Palestinians will have one of their key demands acceded to, without having to do anything in return. Incidentally, this is also the stance of the Liberal Democrat manifesto, which says they will “Officially recognise the independent state of Palestine”.

Labour calls for “an end to the blockade, occupation and settlements, and an end to rocket and terror attacks”. This suggests Israel’s actions towards Gaza and the West Bank are morally equivalent to terrorism. There is no suggestion about how any of these phenomena would be ended. Is Israel supposed to immediately open up the Gaza border, relinquishing controls over components for terrorist rockets and attack tunnels getting in? Is Israel expected to immediately pull out of the West Bank? With no security guarantees? What happens to the half a million Israelis living in East Jerusalem and the West Bank? What’s the penalty or sanction for Israel if these things don’t happen? Indeed, what’s the penalty or sanction for Hamas if rocket and terror attacks don’t stop?

Finally, whilst the policy from party conference specifically “rejecting trade agreements with Israel that fail to recognise the rights of the Palestinians” didn’t make it into the manifesto, a general stance on trade to “require all UK trade agreements to be consistent with international humanitarian law” is included. Could this quickly open the door to a ban on goods from Israeli settlements? And is this a green light to block a trade deal with Israel after Brexit?

The key thing to remember is that it’s not just the wording of the manifesto to be concerned about, it’s the personnel who would be interpreting that wording into practical policy decisions such as ministerial rulings on export licenses. If Ministers or Special Advisers in a Corbyn government in key ministries such as MoD, FCO, DFID and BEIS turn out to be people with a partisan history as anti-Israel activists, they will seize on the ambiguity of the manifesto wording to push their own agenda as hard as they can. Not least, that applies to a Prime Minister who is a patron of the Palestine Solidarity Campaign, who would presumably bring current advisers with hard-line views on Israel such as Seumas Milne and Andrew Murray into key roles in Number Ten.