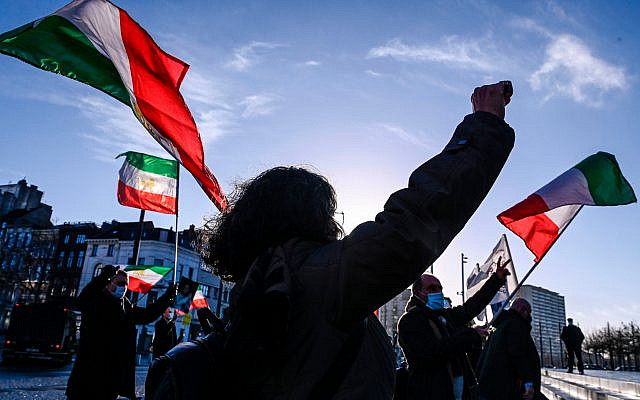 Protests of Iranian and opposition

If everyone in Iran made it his or her goal ” to eliminate one mullah or ayatollah ” during the month of January 2020, for example, the problem would be solved, wouldn’t it? All of them would be gone. Imagine for a second, “life in Iran without Mullahs”. Everybody talks about it, protest against it, in other words, does nothing to it.

There is absolutely no way diplomacy or dialogue works with Shia’ mullahs. It’s like your house is infested with cockroaches, the only way to solve the problem is to get rid of all of them. Granted the mullahs are far worse than any cockroach.

You may think I am promoting “Terrorism ” or something resembling terrorism when in fact I am not. If all the terrorist-loving mullahs were eliminated tomorrow, tens of millions of lives worldwide would be saved. That’s for sure.

Let’s explore this a little bit further. During the regimes of Muammar Gaddafi [1 September 1969 — 20 October 2011] and Saddam Hussein [16 July 1979 — 9 April 2003], both of them respected Islam, both men had absolutely no use for mullahs in their current form as they are in Iran. They both supported Khomeini, in the rebellion of 1979, because he opposed the late king of Iran, Mohammad Reza Pahlavi, and they hated King -The Late Shah- because ” Pahlavi was on good terms with the USA and Israel “.

In other words, to sum it up the mullahs are worthless. They live in the middle ages, they murder, rape, terrorize, torture and eliminate anyone who stands in their way. only in The 1988 executions of Iranian political prisoners, between 5000 and 6000 had murdered. or The 2019–2020 Iranian protests also known as the Bloody November, that Reuters reported the slaughtering of about 1,500 protesters. these are 2 samples of extreme barbarity of a regime that has a management model based on pure Mohammadi Islam.

The only way you can move forward is to get rid of all of these brutal and corrupted mullahs. Any true Muslim ( remember now, I’m talking about true Muslim) knows I am right. What IRAN lacks right now is leadership.

Granted to go against the totalitarian regime means almost certain death. But if enough Iranians and I am talking in tens of millions here. If enough Iranians go against the ayatollahs and the mullahs, wonders will happen. The historical examples were Ukraine [* velvet or The Orange Revolution, 2004-2005] and Egypt, Tunisia. [*Arab Spring, 2010-2012].

Diplomacy and dialogue, once more, I should emphasize, will never work. in fact, the only thing has any chance of ever working is my example here, or something very similar. What Iran and Iranians need is for a powerful leader to emerge similar to one of the modern east European leaders or one of the best modern Iranian’s king, Reza Shah Pahlavi (15 December 1925 — 16 September 1941), or Nader Shah Afshar [ 8 March 1736 — 20 June 1747].

Because regardless of what you may think during his leadership the nation prospered, had peace and the majority lived well and without fear.

The middle eastern people cannot have democracy as they have in the west. It simply doesn’t work. They need strong, tough, but fair-minded leaders, then watch them excel.

The leader I am talking about would of course recognize the importance of governing his country and worshiping his God, they are 2 completely different tasks. If you try to run a country based on ideology, you will have nothing but problems. from 1979, the civilized world understood the meaning of Khomeinism, which is worse than The Genghis Khan, the first Mongol Empire [1206-1227].

All faith has to be respected and Islam is respected faith but only to the true Muslims. Once you cross over into radical Islam or clerical fascism, you have already lost. Look at Khamenei, the current dictator of Iran — how is that working? He is the second caliphate of Shia’ religious octopus in Iran after 1989.

People around the globe want the same thing. They want peace, freedom and democracy, a future for their children and the country they can be proud of. As you read this, we’re waiting for this great leader to rise up. Where’s he? who is he?

On another side, the Shia’ religious octopus in Iran try to preserve the Islamic caliphate of Mullahs and hold the election in June 2021, more likely one mullah be the president of Iran! who knows?

Unfortunately, among the opposition’s leaders of Iranians in the diaspora, it’s very hard to find a charismatic figure to invite the Iranian society. furthermore, the life and profit of some Iranians is dependent on the survival of Mullah’s regime.

The rogue regime in Tehran is the primary source of turmoil & instability in the region. The regime thirsts for evermore dominance across the region &beyond &employs a terrorist network to achieve that goal, even as it continues to move aggressively in its pursuit of Nuclear Weapons and weapons of mass destruction. Khamenei, loves instability and chaos in the Middle East, his life has depends to war, savageness, viciousness and conflicts!

Regrettably, the EU and the New President of The USA are hesitating to face this reality which is gathering knowledge regarding the ideology of Khomeinism and the structure of The Guardianship of the Islamic Jurist, which is a groundless theory in Shia Islam.

With the lack of this knowledge, the ruin of Mullah’s regime is no in a foreseeable future.