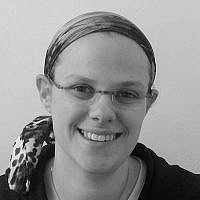 The Blogs
Leora Packer
Apply for a Blog
Advertisement
Please note that the posts on The Blogs are contributed by third parties. The opinions, facts and any media content in them are presented solely by the authors, and neither The Times of Israel nor its partners assume any responsibility for them. Please contact us in case of abuse. In case of abuse,
Report this post.

Sometimes I wish I could be more dishonest, at least with myself. One of those times occurred at the Sheba Medical Center. It was a Monday night in August just a few months ago. I arrived in the surgical ward in advance of two simple surgeries – one laparoscopic, one with a knife. While I felt confident about the medical team, I dreaded the night in the hospital. Despite the joyous occasions of my previous four hospitalizations, all postpartum, I associated those stays with sleepless nights, noisy maternity wards, and even being left helpless in the hallway for hours when the hospital exceeded capacity.

So, as I gave my name and proceeded to have my blood drawn by an overworked, over-tired medical student, I already felt anxious. And then I was informed that there were “no beds left in the surgical ward.”

“No, its all full here, you can stay one floor down in the Burn Unit.”

“Yes. They know you are coming.”

My stomach churned, and I began to feel queasy. I have spent much of the last two decades engaged in activism, reading, thinking, learning, and writing about the stigmas associated with disability and other surface differences. Yet suddenly I found myself confronting a shameful truth: I was afraid to be in the Burn Unit. I wished I could hide from my own fears – or at least lie to myself about them – but I couldn’t. I was terrified of what I might see in the there. I imagined faces and even whole bodies covered in painful blisters and peeling skin. I imagined patients crying out in agony and constantly signalling the nurses’ station for help. But I had no choice.

My fears were for naught. The halls in the Burn Unitsilent – so much so that I found myself lying awake at 2 AM listening to the tick-tick-ticking of the oxygen tank in my room. No other noise was to be heard. But inside my initial nausea was eating away at me. What was it that had scared me so much about the Burn Unit?

Two days later, on my way out of the Burn Unit, I noticed a big green flag and signs expressing support for Itzick Saidian, a 26-year-old Tzahal veteran, whose “audacity” had left the country speechless just months earlier. After serving in the 2014 Gaza war, Itzick was diagnosed with PTSD. Apparently, he had tried urgently and repeatedly to get help from the government, but apparently no one saw his pain as severe or legitimate enough. In April 2021, Itzick set himself aflame at the Ministry of Rehabilitation in Petach Tikva, right near my home. It seemed to be his last effort to be heard, to be seen, and to be helped. Itzick survived and is now hospitalized in Sheba’s burn unit, just a few rooms down from where I slept.

The image of a young man burning alive is impossible to bear – and even feels too gruesome to write about without a trigger warning. How could a human being inflict so much pain upon himself? This was still on my mind two days after my surgeries when I saw someone who knew about my operations. My insides were still in severe pain, and I felt faint.

“I can’t even tell you had a procedure!” he exclaimed cheerfully.

Instinctively, I lowered the neckline on my shirt just enough for him to see the bandage covering the 5 cm incision on my neck. Ironically, that wasn’t even what hurt. What hurt was my insides, my abdomen.  It had been operated on laparoscopically, leaving minimal scarring, and essentially novisible evidence. What compelled me to show him my bandage and force him to look at my scarred neck? I think I couldn’t let him leave me to suffer alone. I think I wanted a witness to my pain.

This experience brought me back to Itzick. Why did he light himself on fire in such a public way? Maybe he wanted us to see his burning pain, the protective shield of innocence peeled away by trauma. Maybe he wanted us to witness his painful scars and his self-destructive actions that left his skin peeling because they served as a testament to what he had endured – and continues to endure. He was not heard when he spoke, so he raised his voice until he “screamed.” He screamed louder and louder until we had no choice but to see. And it is ugly, very very ugly. Maybe almost as ugly as he must have felt to be abandoned and silenced by the very government office whose mission was to help him.

I think back to that moment in the hospital when I heard the words “Burn Unit,” the moment when I wished I could hide from my own truth. Why was I so afraid to see another person’s pain? Was there a part of me that sympathized with Itzick Saidian and his cause from afar but was terrified to see his pain up close? Why are we so afraid to let the pain of others into our hearts? Is it illegitimate or weak to invite, or force, others to look at our pain? Certainly, a laparoscopic procedure protects a patient from significant external scarring. But is laproscopic surgery also meant to spare others from seeing our scars? Why does our culture so often demand that our neighbours keep their hurt to themselves, and suffer their invisible inner pain in solitary silence?

I have been fortunate enough to recover physically, but I wonder how many men, women, and children suffer alone, in silence – without anyone to witness their invisible pain — shamed into concealing what they need others to see. After all, who wants to see an ugly scar?

About the Author
Leora Packer, PhD is American born. She currently resides in Petach Tikva with her husband and four children, where she works as a psychologist in private practice.
Related Topics
Related Posts
Comments