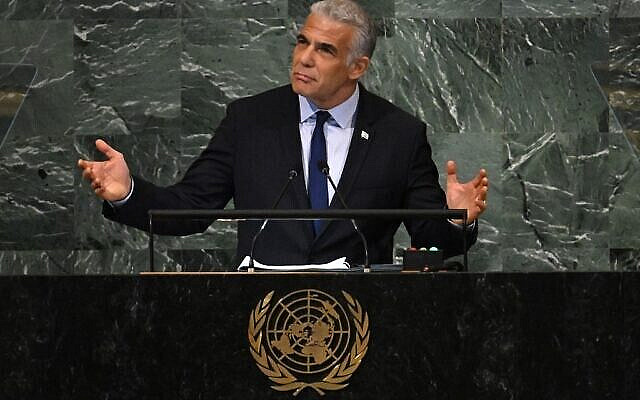 Israeli Prime Minister Yair Lapid spoke at the recent United Nations General Assembly debate about the state of affairs in the Middle East, and among other things talked of the importance of a two-state solution for the longstanding Israeli-Palestinian conflict.

It is conventional wisdom, but not incorrect, that the moment is not ripe for big developments on the peace front. Consequently, most experts and diplomats understandably look for small steps, confidence building measures on all sides.

And yet, what Lapid did was so important exactly because he reminded everyone that the ultimate goal should remain the same. It is premised on the belief that providing a solution in which both sides benefit is the only one that can satisfy the aspirations of both peoples.

Of equal significance is the notion, not spelled out by Lapid but implicit in his remarks, that the eventual emergence of a Palestinian state alongside the Israeli state is as important to Israel’s future as it is to the Palestinians. What Lapid’s remarks should do is open again for the first time in a while a conversation about the need for an Israeli initiative to break the deadlock that has now existed for years. And in doing so, he is tacitly speaking to the dangers of Israeli complacency about the status quo and the illusion that it can remain so for the foreseeable future.

A two-state solution, with all of its challenges, speaks both to Israel’s internal and external needs. Internally, two themes related to a two-state solution stand out: first is the priority to maintain Israel as both a Jewish and democratic state. That means ensuring a significant Jewish majority and avoiding a situation where any Arabs, whether within Israel itself or in the territories, are permanently deprived of equal rights with their Jewish neighbors.

This can only happen by separating Israelis and Palestinians in parts of the West Bank with the goal – but one which depends on radical change in the Palestinian camp – of creating a Palestinian state alongside the Jewish state.

The second speaks to Israel’s ability to maintain a degree of unity in the country if in fact terrorism and violence accompany these efforts, whether it comes from Fatah in the West Bank or Hamas from Gaza. There we look to the contrasting examples of the First and Second Intifadas.

During the First Intifada, after several months of a united country against the Palestinian uprising, Israel became a divided nation for several years as violence raged and the international community was highly critical of Israel. Many of those in the center and the left in Israel argued that one could not completely blame the Palestinians since under then-Prime Minister Yitzhak Shamir, Israel was offering the Palestinians nothing to speak of to change their situation. These divisions within Israel weakened the government’s ability to deal with the Intifada itself and with the international outcry.

Fast forward to the Second Intifada, a much more painful one for Israel with suicide bombs terrorizing its population, the saving grace was how united Israel was throughout those trying days. And the key reason for this was the fact that the violence had erupted right after the Barak government had offered the opportunity to the Palestinians at Camp David to reach an agreement with Israel that would have led to a Palestinian state. The Palestinians, led by Yasir Arafat, turned it down. And so, when violence ensued, just about everyone in Israel understood that one couldn’t blame Israel after such an offer. And so the country stood together.

The lesson should be clear: Israel should not be complacent about the status quo. It should realize that significant violence even beyond what happens now could erupt if nothing moves. It should realize that an initiative by Israel, even one short of one leading to a final agreement, would help to bolster Israel’s position internally and externally.

Enemies of Israel around the world won’t be pacified because for them the very existence of the Jewish state is anathema. But for those who are open-minded and have been critical of Israel regarding the Palestinians, an initiative by the Jewish state will certainly pay dividends, at least in the short and medium term.

And, as positive as the Abraham Accords are, in particular in not letting normalization be held hostage to the Palestinian issue, it still would deepen and possibly expand those agreements to see Israel, not under duress, take a proactive initiative to make life better for the Palestinians and even open up potential for significant negotiations down the road.

Complacency is not a good thing for Israel, even for a public that has become quite cynical about a peace process. Complacency was poison for the country when it set in after the Six Day War and eventually resulted in letting its guard down as Egypt and Syria were preparing for what became the Yom Kippur War.

Now a different kind of complacency has set in, not out of hubris but out of disappointment and disillusion. It may be understandable, but it is dangerous nonetheless. It’s time to wake up.