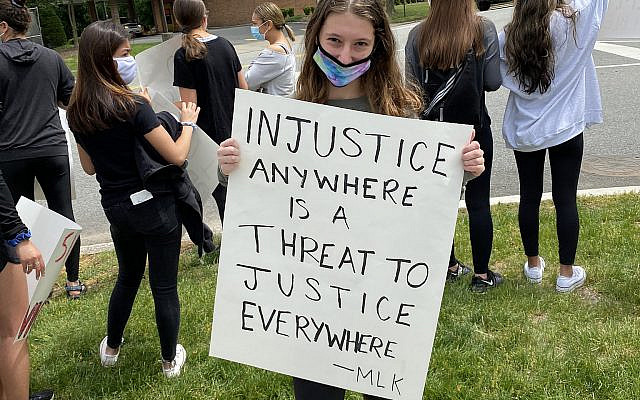 Students Demonstrating for Justice and Unity

On March 13, 1943, Danka Dresner and her mother, Chaya tried to hide while the Krakow ghetto was being liquidated by the Nazis. They hoped by hiding they could avoid the fate of those who went on the trains and never came back.

Chaya and Danka, the mother and daughter were separated briefly while hiding but in fright, they fled to the dangerous streets to find one another. They both braved the avenues crawling with SS machine guns, trained on Jews making an effort to escape.

A classmate of Danka’s only 12 years young, who was tasked with clearing the luggage from the alleys amidst the chaos, saw Danka and her mother, Chaya. He quickly grabbed them, hid them and then led them to “the good line.”

Chaya Dresner patted this boy on his head and said to him, “You are no longer a boy. You are now a man.”

Indeed, he was. This boy, Leon Leyson, witnessed things in his childhood that most could never fathom in a lifetime. These circumstances matured him faster than puberty or a conventional education could afford.

This Tuesday afternoon, organized by students from Northern Valley High School, a gathering was convened in Closter, New Jersey. More than 250 people, mainly 15-19-year-olds along with some parents and members of the community, all who practiced appropriate social-distancing, wore masks and wielded signs as they showed their upset, anger and sadness over the senseless death of George Floyd. They stood (figuratively) shoulder to shoulder with African American students, Asian American students, Jewish students, Latino students and other minorities in a powerful and needed moment of unity. This group reminded those assembled and all passersby, that an act of oppression against one is an act of oppression against all. Many of these very leaders stood on the Bima with me just a few years ago and celebrated their B’nai Mitzvah. As a rabbi, I could not be prouder.

Most leading this demonstration were denied a semester of study or the rites and rituals of a senior year, including a prom and a traditional graduation ceremony. What they proved today is that regardless of those formalities, they have demonstrated they are ready for adulthood and leadership. They passionately and thoughtfully led by example; fusing their head and their heart and offering our community a compass during this time of unsteadiness and uncertainty.

My temperature of the country today is one that is showing symptoms of upset, worry and frustration. A pandemic has ravaged our nation and claimed more than 100,000 lives in less than 70 days. A vaccine seems far away, and our choices are stark: continue with a social distance and pay a severe economic price or re-engage at the expense of more lives lost. Our national shut-down has costs 40 million people their jobs and caused our economy to tumble towards a depression. Social unrest has grown because, again, an unarmed black man was killed by police officers for an alleged petty crime. The death of George Floyd has highlighted the giant divides that exist between class and race in our country. The conflation of these events would be enough to challenge us during any one year. To have all of these events occur in the same quarter is incomprehensible.

We are a country thirsty for empathy, compassion and a virtual hug. We are scared and this is all unnerving. We want to know from our elected officials, clergy leaders and admired elder-states-people that the sun will shine tomorrow. We want to know that there is promise for a better day. We want to have the seeds of hope cultivated for us and for our loved ones. Hope, after all, is more viral than any disease. Even I, who often needs to offer hope, looks for hope to buoy my spirits.

Today, while overwhelmed with feelings of despair, anguish and sadness, my hope was renewed witnessing the home-grown leaders who will shape tomorrow. Knowing they will use their voice to advocate, their hands to heal and their feet to bring them towards making a difference is all reason for me to lean-in towards hope.

Chaya and Danka Dresner leaned-in towards hope. So did Leon Leyson, Danka’s classmate who put them in “the good line.” All three survived the Holocaust and thrived

Hope is contagious. Let hope infect us and float our spirits, strengthen our resolve and remind us of the brightness of the sun rising on the horizon.

“The day is short. The task is great.” Let us get to work, inspired by our newest leaders, encouraged by unquenchable hope and fueled by our need to leave a better world to our children and their children, too.

About the Author
David-Seth Kirshner is the senior rabbi of Temple Emanu-El, a Conservative synagogue in Closter, New Jersey. He is the past President of the NY Board of Rabbis, President of the NJ Board of Rabbis and a Senior Rabbinic Fellow at the Hartman Institute. Rabbi Kirshner was appointed to the New Jersey/Israel commission and is a member of the Chancellor's Rabbinic Cabinet at the Jewish Theological Seminary.
Related Topics
Related Posts
Comments