The Blogs
Nathan Bigman
Apply for a Blog
Please note that the posts on The Blogs are contributed by third parties. The opinions, facts and any media content in them are presented solely by the authors, and neither The Times of Israel nor its partners assume any responsibility for them. Please contact us in case of abuse. In case of abuse,
Report this post.

In our quaint, overpriced, Jerusalem neighborhood of Bak’a (known to one easily-bribed municipal official as Geulim), around the corner, in the park, inside the community garden, across from the compost bins, lies the community library. It’s a three-sided hut that was expertly built by my neighbor, Rafi, and it contains literary treasures never seen before near the compost bins, in at least four languages. 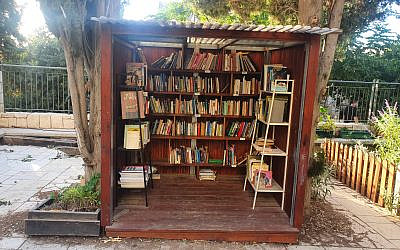 Here’s how it works. You walk the dog. He does his business. You pick up the business and discard it. Empty your compost bag into a bin, then head over to the library, where you might find:

This is the first volume of The Cairo Trilogy, written by Naguib Mahfouz. Surely you’ve heard of him — he won a Nobel prize. No? Me neither. The book follows an Egyptian family from around 1919 until the mid-40s. It provides fascinating insights into Egyptian society and politics. I found it a little hard to follow because the names of all of the characters sounded the same to my American ears. Imagine if you were a native Arabic-speaker reading a translation of an American book featuring Robert Johnson, John Robertson, Rob Roberts, and Bob Robinson.

The English, as occupiers, are in the background of the story ruining everything, as they did all over the globe for several centuries as occupiers or as colonizers.

I liked the book so much that I purchased the other 2 volumes. I’m not putting them back in the library until I read them again and figure out which Ahmed is which.

This is a historical novel by C. S. Godshalk. Its plot is built around the colonization of Borneo by… guess who? Yes, it’s the English again, saving the world from not providing natural resources to the English. It was a horrifying business that many of us are blissfully unaware of, but probably should be agonizingly aware of. It gives you perspective about our own place in the world and about European attitudes.

I should probably state quite plainly and somewhat insincerely, some of my best friends are English.

I had some trouble with the names in this book as well. Some of them are Bornean native names, which is at it should be, but each of the Europeans had a Christian name and a nickname, used interchangeably according to the whim of the author. She also has this annoying habit of using a pronoun with no antecedent, leaving you to guess who the heck was directing the massacre du jour.

A novel by William Kent Krueger that has people dying left and right (not a spoiler, that’s on the back of the book) and a small mystery. As mysteries go it’s not amazing, but the beautiful prose and the rich descriptions of Minnesota small-town life, along with the character development, make this book worth reading, especially if you get it for free. I had no problem with the character names in this one, so if you were starting to think that the problem was with me, that should set the record straight.

Note: Minnesota is a state in the (currently united) States of America.

The Art of Fielding

This is a novel that pretends to be about baseball but is really about life and stuff. I found it mesmerizing, and much more interesting than the across-the-street Yom Kippur service I was sort of participating in from our terrace. If you’re not interrupted by eating or prayer you won’t be able to or need to, put this book down.

Thanks to Rafi for building the library, and to all of those nameless people who left great books for others. Eventually, I’ll get around to putting some of them back.