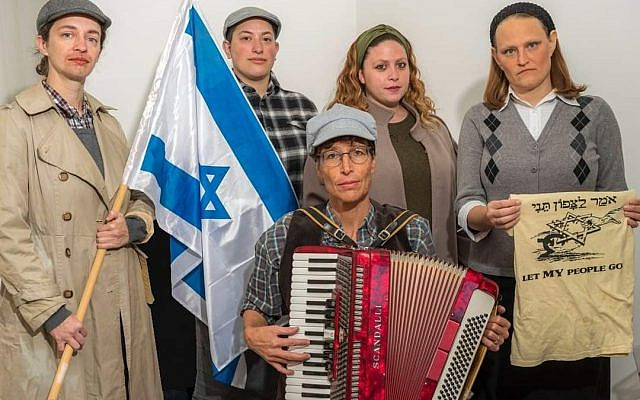 So if any of you were wondering, I took a break from this blog to immerse myself in a deeply moving, artistic venture that brings to life one of the most earthshaking recent chapters of Jewish and world history.

But as the weekly Parshiot are still my anchor of connection and perspective, I am writing this week, because I find that the recent themes of Sefer Shmot are completely intermeshed with those of the extraordinary musical that I am priveleged to be part of: “Whisper Freedom – The Soviet Jewry Struggle”, by the Women’s Performance Community of Jerusalem. So much so, that tickets for the latter went on sale a few days ago, as we relive our People’s first Exodus from Egypt, in Parshat BeShalach!

We recall this dramatic story every year on Pesach, every week on Shabbat, and every day in our prayers, because it is a powerful, eternal paradigm of striving from slavery into freedom, from darkness into light.

The Exodus story is the Jewish People’s message to humanity: we must struggle for freedom, we must appreciate our freedom, and we must remember that the purpose of freedom is to infuse our world with holiness, goodness, justice, and mutual responsibility.

In fact, there are many national “firsts” in this Exodus Parsha that seem to be a model for generations to come. At the edge of the Sea, God admonishes Moshe for praying versus moving the People forward. He tells him that sometimes you just must act, like Nachshon, with total faith, and only then will God open the Sea for you.
“!יד,טו: “וַיֹּאמֶר יְהוָה אֶל-מֹשֶׁה, מַה-תִּצְעַק אֵלָי; דַּבֵּר אֶל-בְּנֵי-יִשְׂרָאֵל, וְיִסָּעוּ

And then, we hear the spontaneous outburst of gratitude among the men and women of Israel, who sing the Song of the Sea separately, each in unique form. The men sing praises to God, while the women, led by Miriam, take out the timbrels that they had packed with the diapers, in prophetic anticipation of this moment, and sing and dance in utmost joy. A lovely precedent for women’s venues of spiritual and artistic expression, such as the music and dance production “Whisper Freedom,” by women, for women!

As we travel into the desert in Parsha BeShalach, there is also the sudden intense awareness that our water and our food are not a given from the Nile, but blessings brought to us by God. The Manna is a metaphor for our livelihood, which is as much a function of faith and connection, as hard work. And through the Manna, God teaches us about holy time – Shabbat. There is a day of reconnection that infuses our whole week with meaning.

Over fifty years ago, the first groups of Soviet refuseniks (Jews denied exit visas to Israel) put their lives on the line to pursue freedom. These Soviet Jews sought meaning through identity with Israel, Judaism, and an entire People that the Communist regime had tried to keep beyond their radar. Their brave actions and cries – and the response of Jews world-over – created the first cracks in the heretofore impervious Iron Curtain.

“Whisper Freedom” is the story of two sisters, a determined community of Moscow refuseniks pursued by an omnipresent KGB, the perils of life (and Shabbat) in a Siberian prison, and reawakened identity, selflessness, and courage of Jews both within and beyond the walls the Soviet Union, that led to the second miraculous Jewish Exodus three decades ago.

The Aliyah of 1.1 million Russian-speaking Jews to Israel began in illegal Ulpan classes in cramped Soviet apartments and demonstrations of faith in the face of a ruthless, Godless, gargantuan enemy. My first visit to Russian refuseniks in 1985 was a gamechanger in my life.

For tickets: http://bit.ly/WPCJM
(Subtitles in Hebrew and Russian!)

About the Author
Linda Pardes Friedburg made Aliyah from New Jersey in 1990. She is Founding Director of Shishi Shabbat Yisraeli National Jewish Leadership Initiative for Young Russian-Speaking Israelis, is grateful for her six kids and one Belarussian husband, and still feels the need to pinch herself every time she drives up the hill to Neve Daniel, Gush Etzion, their home since 1994. www.en.shishi.co.il https://www.jgive.com/new/en/usd/donation-targets/64189 https://youtu.be/i0cR_j6OLP4
Related Topics
Related Posts
Comments