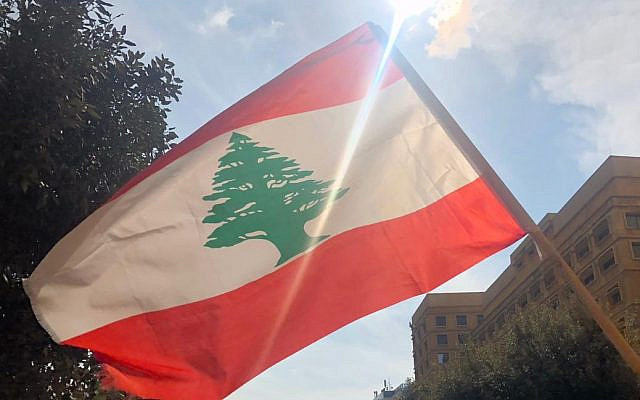 A Lebanese flag held up during protests in Lebanon on October 18, 2019 (credit: Shahen books / Wikimedia Commons).

Lebanon is probably in worse shape today than it was during the civil war of 1975-1990. Lebanese people are committing suicide out of desperation. Al Arabiya reported that, “Lebanon’s economic crisis is fast slipping out of control, driven by a currency collapse that’s decimating businesses and plunging families into destitution”.

The value of the Lebanese currency, which was already very low before Covid-19, has plummeted even further; 9,000 Lebanese pounds are exchanged for one U.S. dollar on the black market, and two thirds of Lebanese households have seen their incomes reduced. The combination of these two factors means that the cost of living which was already high in Lebanon before Covid-19, has now reached unbearable levels. In addition, the unemployment level exceeds 30% as of June.

A study by the World Food Programme reported that “one in four Syrian refugees have already exhausted their coping capacity, followed by one in five Palestinians, and 12 percent of Lebanese.”

The control that the Hezbollah terrorist group has over Lebanon is the largest part of the problem. U.S. Ambassador to Lebanon Dorothy Shea, “accused Hezbollah of destabilizing an economic recovery in Lebanon and siphoning billions of dollars from the government”. Lebanon’s response was to ban the media from speaking with her.

An even deeper problem is that the whole Lebanese ruling class is corrupt and has lost the confidence of the Lebanese people, and particularly young people who demanded that all politicians must go. Lebanese people see deep sectarianism, a patronage network, and corruption as obstacles to progress, but there are no politicians capable of solving these problems because no government can gain the approval of parliament unless it is beholden to these old ways.

Lebanon’s situation is desperate, and the solution must be drastic. The approach that seems most appropriate to Lebanon is the approach taken with Japan after the second world war. Japan was occupied by the Allied Forces and reconstructed in seven years, from 1945 to 1952. During that time, a new constitution was written, and Japan’s economic, political, and military institutions were rebuilt. This is what Lebanon needs.

Hezbollah must be disarmed. It controls the Lebanese political system under the excuse that it is defending Lebanon against Israel, which is the opposite of the truth; the reality is that threats by Hezbullah against Israel could ignite another war with Israel. Hezbullah is a criminal organization that, according to The Washington Institute, “runs one of the largest and most sophisticated criminal operations in the world”. Maria Maalouf wrote in the Arab News that, “Hezbollah is the major obstacle for Lebanon’s economic excellence because it is draining the country’s reserves of dollars and sending them to Syria, Iraq and Iran”.

The Lebanese government, its parliament, and all its political parties must be dissolved. They are all based on the existing sectarian and corrupt political system. As we saw when the government of Saad Hariri was replaced after massive protests in the streets of Lebanon, the new government was no better, and it gave Hezbullah even more power than the previous government.

A new constitution and a new set of laws must be written. They must be modelled on the constitution and laws of modern liberal states such as France, the United Kingdom, and Canada. Religions and the state must be divorced completely from each other, and extensive sets of checks and balances must be introduced to guard against patronage and corruption.

A peace agreement must be signed with Israel, allowing normal diplomatic relations, trading relations, and travel between the two countries. Lebanon should be able to benefit from having a nation with a powerful economy as its southern neighbor.

The creation of new political parties must be facilitated, and those parties must be secular. The new parties must represent the economic and social interests of Lebanese citizens, regardless of religion and gender, and they must promote a culture of integrity, transparency, and equal rights for all citizens.

Knowing the steps to take, however, is the easy part. The hard part is to get it done. It is a gargantuan task that is likely to take a couple of decades to accomplish. Just as Japan was governed by the Allies during the transition period, Lebanon must be governed by a committee of foreign politicians and diplomats until a new constitution and new laws are in place, until judges, lawyers, and police forces are re-trained, and until new secular parties are fully operational.

The hardest part is the disarming of Hezbollah, and that cannot occur without violence because Hezbollah will not willingly give up its power. Nothing short of the invasion of Lebanon by a foreign power, such as France, and the installation of a provisional government, is required. Since this is unlikely to happen, expect Lebanon’s situation to continue to worsen for the foreseeable future.