While I hope that I express myself clearly enough on the actual subjects I write about, some readers tell me that I leave one issue blurred: what’s my actual political inclination? “In your posts”, they say, “you’ve attacked Cameron, written against Farage, derided Labour and slammed the Liberal Democrats.  So who do you support?  Are you a right winger or a left winger?”

Well, folks, sorry to disappoint you all: I’m neither!  I’m not a centrist, either. And I certainly ain’t a fence-sitter!!  But why do I have to be anything?? I am a political animal, of course; but why do I have to align myself with a particular political party and with their doctrine?

In their thirst for success and power, politicians throw mud at each other; the despicable ‘mainstream’ media joins in, attempting to demonise the side they don’t like.  We, the public, are left frustrated, holding them all in contempt.  Political leaders will find it very hard to gain our respect if they seem unable to respect each other.

That does not mean that we should switch off and lose interest in the whole bloody thing; that would be effin’ stupid.  The reality is that a sensible case can be made for both the ‘right-wing’ and the ‘left-wing’ views of the world.  Everything but the political extremes is reasonable and deserves at least consideration – if not always support.  After all, capitalism remains the only system with a track record of delivering economic growth and societal progress; but softening its rougher edges and imparting it a better human interface is a worthy endeavour.  We want the most fortunate of us to contribute more; but we also want to provide them with the incentive to exert their talents, invest and become even more fortunate.  We want a society kind to those less fortunate among us; but we also want them to make a stronger effort, not rely on handouts.  We wish to relentlessly pursue prosperity and success; but not by riding roughshod over our fellow human beings.

There is, somewhere in the middle, a sweat spot, an ideal trajectory we should pursue.  But it is difficult, so difficult, impossible to find.  In our desire to follow that golden path, we elect one party; and then, as we feel that those leaders got it wrong, that they overshot the ideal balance point, we vote their opponents into power.  The upshot is that, instead of following that ideal but impossible path to progress, we meander our way around it; we end up erring at times to the left, then over-correcting  to the right and so on.  We may not follow the shortest, most desirable route; but we are, thankfully, going roughly in the right direction and are never too far away from the Golden Path.  That’s why democracy works.

But it can only work if we, the public, are unregimented; if we are sensible enough to understand that no single political doctrine is perfect; that the question is not ‘which philosophy is right and which is wrong’, but rather ‘in which direction our society needs to go at this time’. 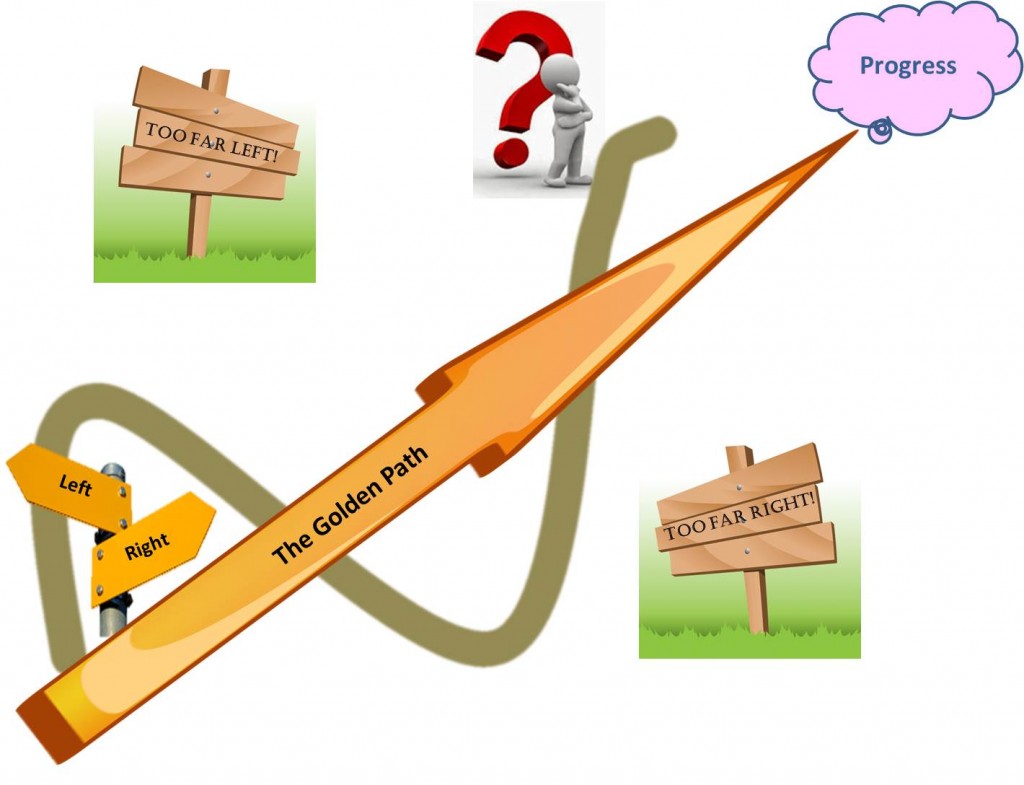 Our not-so-perfect path to Progress {own image}

That is why I am neither a left-winger, nor a right-winger or a centrist.  Call me a swing vote; deride my fickleness, if you so wish.  I don’t care: I reserve the right to make up my mind each time afresh.  Whether in the UK or in Israel, democracy works because of people like me.  Long live the swing votes!  May they grow and multiply.