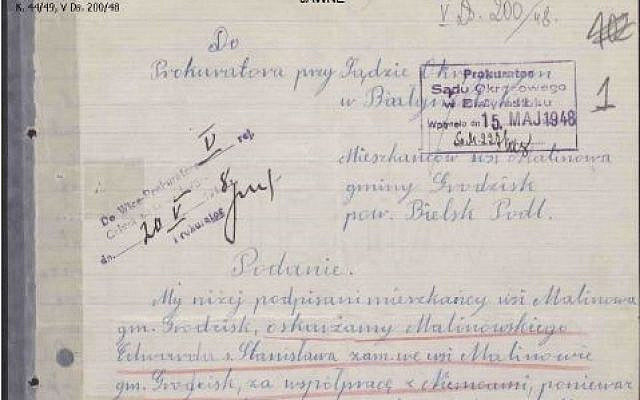 Incriminating letter against the Malinowo mayor send by the village inhabitants to the communist prosecutor office in 1948.

There is no place for provisional legal solutions in international relations, especially when those are to define the vulnerable and contested history and memory. The patched legal crack of 2018 IPN Law became an abyss again with the litigation against prof. Jan Grabowski and Prof. Barbara Engelking. The lawsuit was initiated in 2019  by Filomena Leszczyńska on the initiative and with the support of the Reduta Dobrego Imienia — The Polish League Against Defamation Foundation (PLADF).

This foundation, using an NGO status,  is directed by Maciej Świrski, who was one of the initiators of the IPN law in 2018 and his foundation was the only consulting body of that ill-conceived regulation during the rushed parliamentary proceedings. In May 2019 PLADF have initiated and supported pro bono litigation pending before the district court in Warsaw on behalf of Filomena Leszczyńska. The plaintiff Filomena Leszczyńska, represented by lawyers connected to PLADF started a lawsuit against prof. Grabowski and prof. Engelking accusing them of defamation of her uncle in a short passage of their two-volume book published in 2018 and titled

Dalej jest noc: losy Żydów w wybranych powiatach okupowanej Polski (“Night without End: The Fate of Jews in Selected Counties of Occupied Poland”). The first judgment was reached on February 9, 2021. The court obliged the scientists to apologize to the plaintiff for historical inconsistencies and ruled out any financial compensations that were demeaned. Regardless of the final court judgment in this multilayer and historically complicated case, the legal procedure itself has a devastating effect on conducting and publishing scientific research in Poland, the academic debate in Poland, and on the Polish-Jewish and Polish Israeli relations.

The history and after war testimonies of a Holocaust survivor Ester Drogicka maiden name Siemiatycka, as well as the murder of her entire close family in November 1942 in the forest close to the village of Malinowo became the axis of the contemporary court case. The level of historic narrative sophistication, as well as after war contradictory testimonies around this case are a gloomy reminder of the human condition and the value of life under the two successive totalitarian systems. The German Nazism and Soviet Communism were immanently based on fighting with truth, rewriting history, denying facts and centralizing the narrative. At first for the sake of political power and control which swiftly turned into a totalitarian system and genocide. The morality and ethics, which we preach ex cathedra from the height of liberal democracies, in most cases the only system we ever knew, don’t apply and didn’t function either in Malinowo in 1942 or during the communist trials in 1948-1950. The events there were marked with fear, death, and struggling for survival. Context does matter. It has to be studied critically, very carefully and without any preliminary assumptions. Does it justify murder? No. 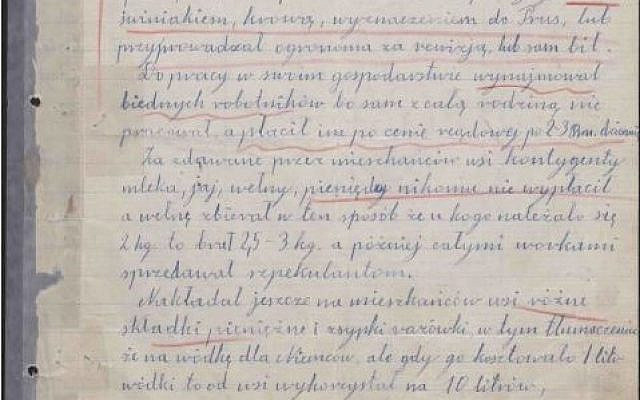 Incriminating letter against the Malinowo mayor send by the village inhabitants to the communist prosecutor office in 1948.

In the 2019-2021 libel legal case, litigation was automatically used to replace an academic debate which shall be the ground for further fact-checking and possible corrections.  Litigation is used to muffle any scientific, fact-based criticism of the official state politics of memory and such practice becomes a litmus paper of the changing political environment from democratic- decentralized into anocratic and control-oriented.

Liberal democracies recognize and respect broad social participation through the work of individuals, foundations, or NGOs in the construction of collective memory. The last 30 years brought a very alarming development of state-sponsored or at times even state created GONGOS — Government Organized Non-Governmental Organizations (GONGOS)  which use the credibility of its supposed independent status for the realization of the official state policy. In most cases, they use soft power, public diplomacy, or social media for the distribution or justification of state planed politics of memory. They are NGO disguised state agencies often contributing to the gradual erosion of civic society and social participation.  Another alarming tool often used by GONGOS to control or muffle public debate is the legal phenomena of using SLAPPs — Strategic Lawsuits Against Public Participation which are aimed not at winning the case but at the draining the side accused of time, money, social trust, or credibility in the prolonged court proceeding. The usage of SLAPPs seriously infringes the freedom of speech and science as it often causes a freezing effect upon not only individuals but the whole line of narrative or field of study.

The whole tragic story of Ester Siemiatycka, the after war communist trials, and contemporary court proceedings, in search of historical truth 80 years after the events, are just becoming history now. Yes, those three time periods and the story of one Holocaust survivor are looped now into one narrative. A narrative that has tremendous educational potential. Teaching us, among others,  what happens when we politicize the historical truth.

The history and possible academic debate, in this case, was taken hostage by politicians who collectively politicly capitalized the first court judgment. They have played on the simple emotions to consolidate its conservative electorate in their narrative of “besieged fortress”.  This pollicization for the sake of internal identity politics contributes enormously to the growing dissonance of the Polish, politicly useful, memory of WW II versus the global, simplified, and one-dimensional memory of war and after war events. The radical positions are voiced and heard on both sides, while the historic facts and their meaning are pushed aside.   This gap is growing and internationally contributes to the gradual isolation of Poland and its narrative.