Personally, I have always had concerns about the move to legalize cannabis in our country and cringe every time I hear an ad on the radio encouraging listeners to sign up for their cannabis prescription “today” if they have any of the latter mentioned issues. All I can think about is how these people are encouraging us to become a “Stoner Nation” as opposed to a “Startup Nation.” Working with addicted youth for over 30 years whose drugs of choice have always been pot and alcohol, I have seen the damage caused by this seemingly harmless drug. 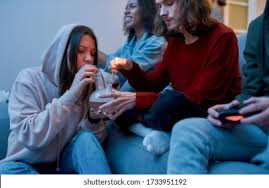 Seven months ago I initiated a sobriety group aged 16-30 consisting of young people addicted to marijuana.  Every week the group members share how their lives have improved since halting their drug use.  They have regained their memory; overall motivation; positive thinking; focus on tasks at hand and authentic connections to name a few. They shared that when they were still smoking their thoughts were always occupied by when they would “use” next; how they would get their “weed”; when can they smoke so it wouldn’t affect their next activity (be it work or school); how would they get the money to buy their next few grams; how would they hide it from family and many more occupying thoughts that kept them from focusing on what’s really important in their life.  In essence, marijuana use affected every aspect of their lives

Sadly, we lost a couple group members who suddenly dropped out of sight and went back to using. One family contacted me sharing that their son owed over 100,000 shekels to loan sharks and are constantly afraid to answer their door. Friends of the boy are trying to raise money to pay off the debt but the parents smartly realize that rescuing their son will enable him to believe that he can keep getting caught in dangerous positions and be rescued by loved ones.

As seen in the last incident, I have found that most of my work is actually done with parents.  Besides the wise young people who have hit their bottom before they have lost everything, I am usually approached by parents worried about their kid’s drug abuse and circumstances.  In the case of one boy who dropped out of the sobriety group he presently owes thousands of shekels to drug dealers and is facing a drug charge. His parents were in need of empowering to tough love their son and not allow him to live in their house while he is continuing his drug use and facing criminal charges. This has been such a painful process for both parents particularly the mother who had been the main enabler. The people closest to her are begging her to back down and take him home not understanding the ramifications of allowing him the comfort of their home when he is playing with fire. Sadly he has other enablers in his life who are keeping him from hitting his bottom. In the end, it may be the court system that catches up with him and due to these seemingly loving supporters he may well be continuing his drug abuse and taken to task by the law.

Joining the Kinus Imahot group — a group of mothers in Israel from all backgrounds — I had the privilege of translating into English the report presented to the Knesset about the dangers of legalizing cannabis in Israel. Most of the incriminating data was gathered from the results of the legalization in certain states in the US. I was aware of many of the resulting damages that occurred due to the legalization but was struck by even more frightening factors. I will mention a few:

In Colorado (USA), which is one of the first places in the world to decide on cannabis legalization, the rate of adult users (aged 18 and over) climbed annually to a rate of 74% after only six years, The number of adolescents’ visits to emergency rooms in connection with drug use jumped by hundreds of percent; the number of drug-related hospitalizations doubled; the number of suicides in which the presence of cannabis was found in a blood test increased 2.5 times, the number of road accident deaths in which drivers were found to be positive in a blood toxin test for cannabis, and the relative proportion of all road accident deaths, increased significantly.

Cannabis in Israel and around the world in the 21st century is not the cannabis of the 20th century. Today’s cannabis has a 30-40% higher THC level, the active addictive ingredient, than “back in the day”. Moreover, there are cases of Vaping where the percentage of THC “skyrockets” and may reach up to about 80-90%.  Accordingly, if in the past cannabis was considered a “transition drug” to other stronger drugs, then today in view of the effect of the increased concentration of THC, cannabis itself has become a “target drug” and the transition to other drugs has diminished though certainly exists. As a result, the psychoactive effect of the plant intensified drastically increasing the addiction and various negative effects considerably.

According to the accepted estimates in the world study, 1 in 11 adults suffers from drug addiction (9%), while among adolescents the addiction rate is significantly higher — one in six (17%). The lower the age of onset of use, the greater the tendency to become addicted. In Israel today youth as young as 11 and 12 are beginning their experimentation with Marijuana.  In daily use, the addiction rate is much more significant — 25% to 50% and the rate of failure to recover from cannabis abuse exceeds those of other drug addicts.

According to data from the Israeli Ministry of Health, the number of patients in dual diagnosis (addiction and mental illness) wards in Israel for cannabis use alone without additional psychoactive substances has jumped in the last decade (2010-2019) from 98 hospitalized in 2010 to 900 hospitalized in 2019. The legalization in Colorado contributed to a significant 74% increase in the number of cannabis users among adults within six years. Accordingly, if we assume that the legalization of cannabis in Israel will lead to a parallel increase in the number of adults with dual diagnosis against the background of cannabis use, which in 2019 stood at a rate of about 3,400 patients, at least, this is an addition of about 2,500 additional patients (per year) in just six years, so that the annual number of patients will be about 5,900.

Of course, even during the “middle years” (from the date of legalization until the end of the six years), the number of adults will probably continue to increase gradually and sharply, as has happened in Colorado and as is already happening in Israel today even before legalization. Cumulatively, thousands of new patients will likely be added each year for the same six years, beyond the current figure of about 3,400 patients. The significance of the above data is a serious aggravation of the “existing” flooding that already exists in the eight dual diagnosis departments in the country, which are occupied above and beyond their maximum capacity, and in some areas of the country, there are no dual diagnosis departments whatsoever. In psychiatric hospitals, this will significantly impair their functioning.

In short, should we decide to legalize cannabis use in Israel we are destined for tragic results added to all of the other unique issues we deal with in our small country.  Colorado anticipated making a significant profit from the sale of cannabis in their state. In the end, they inherited a deficit with increased addiction, hospitalizations, car accidents, teen arrests for illegal drug dealing, increased drug induced mental illness, and more.

Help us to say “No” to cannabis legalization. Should you be interested in assisting in the movement to stop the legalization of cannabis in Israel feel free to contact Shay Lael at lael.shay@gmail.com or call him at 050-447-0390.  And if you would like a copy of the report in English or in Hebrew and or have a loved one battling addiction feel free to contact me for a complimentary consultation. www.jerusalemteencounseling.net 0548108918